Anyone suffering from a chronic medical condition with no known treatment only wants to find something that works, says Yael Elish, CEO of the Israeli startup StuffThatWorks.

Despite the folksy name, StuffThatWorks is a data-centric business that translates patient-reported observations (PROs) — anecdotal stories from chronically ill patients — into anonymized data that can be crunched, analyzed and reported.

Elish was the chief product officer for Waze before starting StuffThatWorks. She believes the same kind of crowdsourcing that enables thousands of Waze users to avoid traffic jam scan work its magic for illnesses without a ready cure – or those where the answers may be hiding in plain sight. 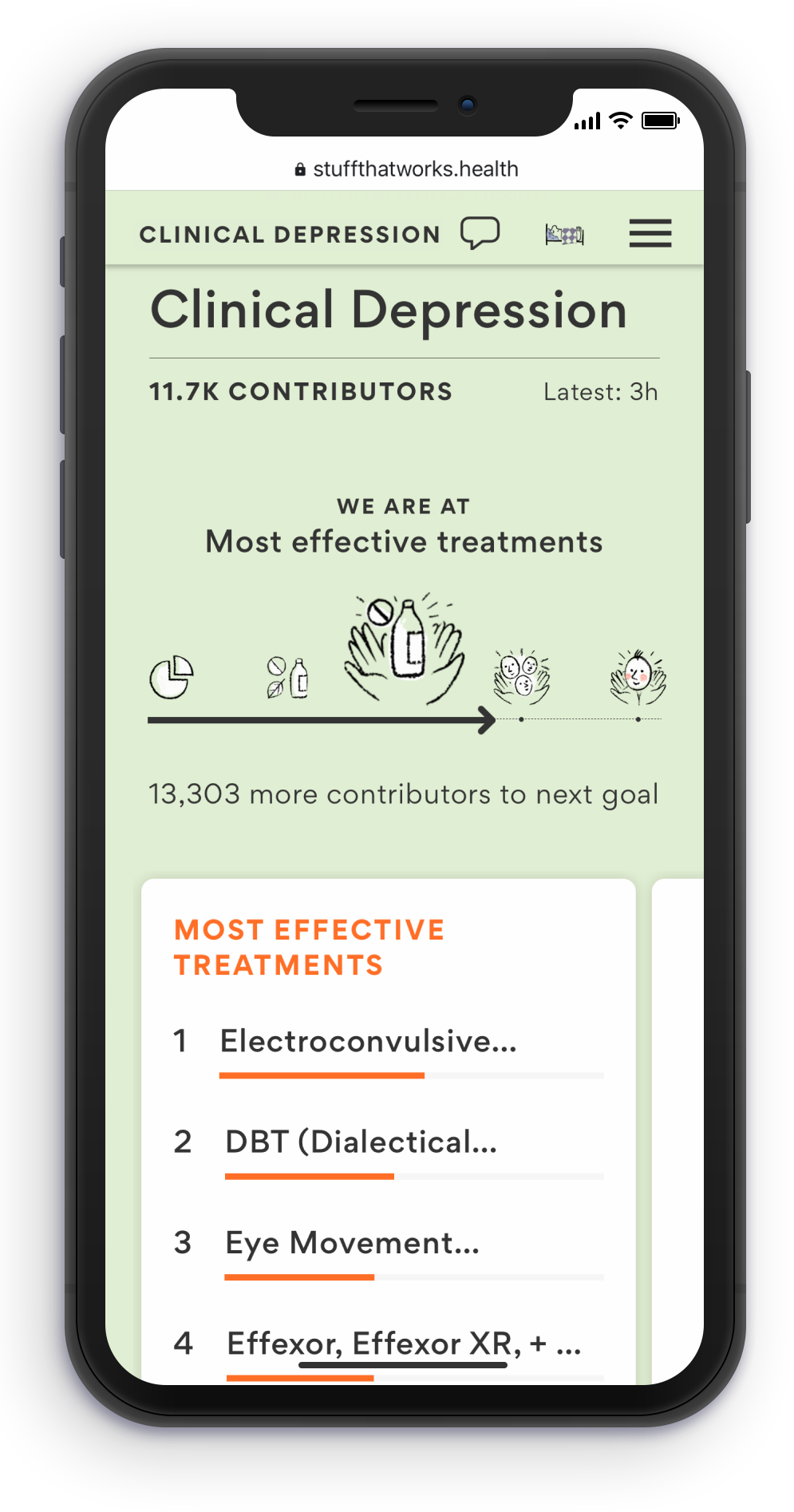 You start by searching for a condition on StuffThatWorks. There are 110 conditions already listed. If the one you’re interested doesn’t appear, you can start a new “community.”

You then answer a set of 60 questions – what was the trigger to your condition, were there any early warning signs, what stage are you in, how long did it take to get diagnosed, what treatments have you tried already, do you have any comorbidities?

The key to StuffThatWorks is that it doesn’t just list the answers as you’ll find on the many chat forum or Facebook groups for medical conundrums.

Instead, it uses artificial intelligence and natural language processing (NLP) to parse free text answers and turn each into a number that can then be organized. The more people contributing to a condition community, the more accurate the data.

Want to know the most effective treatment for clinical depression? The most tried approach to easing fibromyalgia (the condition with the most community members on the site)? StuffThatWorks’ AI can tell you. 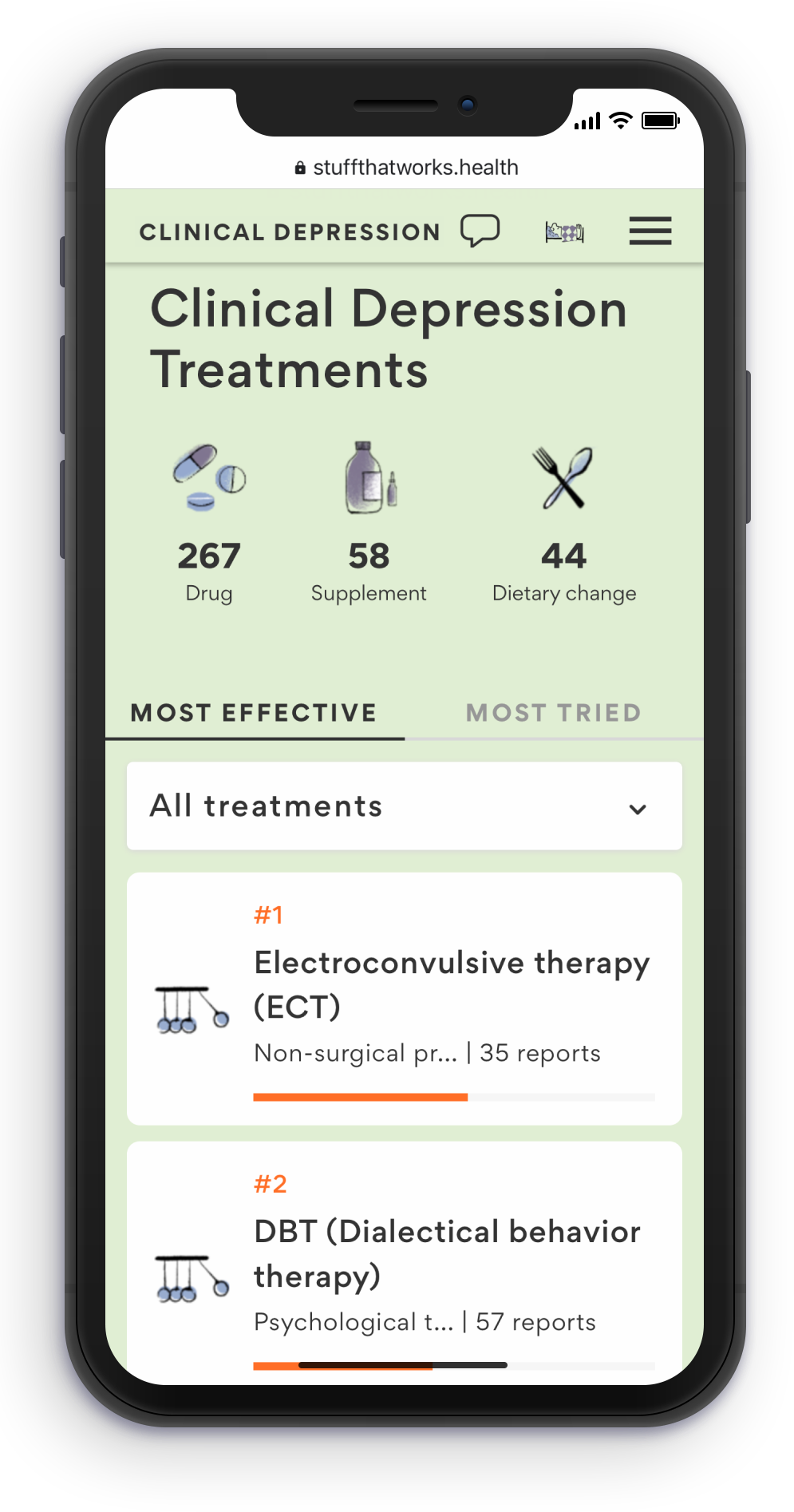 Results are presented in easy-to-read tables and graphs. That’s a clear benefit for patients, but it’s also of great value for pharmaceutical companies, which have a hard time getting PROs.

“It’s extremely costly to get this data, so it’s mostly done by as part of pre-FDA approval of drugs,” Elish tells ISRAEL21c.

As a result, “it’s not being done on a large number of treatments. No one has enough money to run clinical trials for every treatment.”

StuffThatWorks intends to sell the anonymous data to drug and insurance companies. The site will always be free for patients.

StuffThatWorks came out of stealth mode only in July. However, in the year and a half prior to that, 180,000 people stumbled upon or were referred to the beta site and applied to join.

They have since contributed over 10 million data points, enabling the site to generate 150,000 pages covering everything from symptoms to subgroups. All pages are open to the public and can be searched on Google. 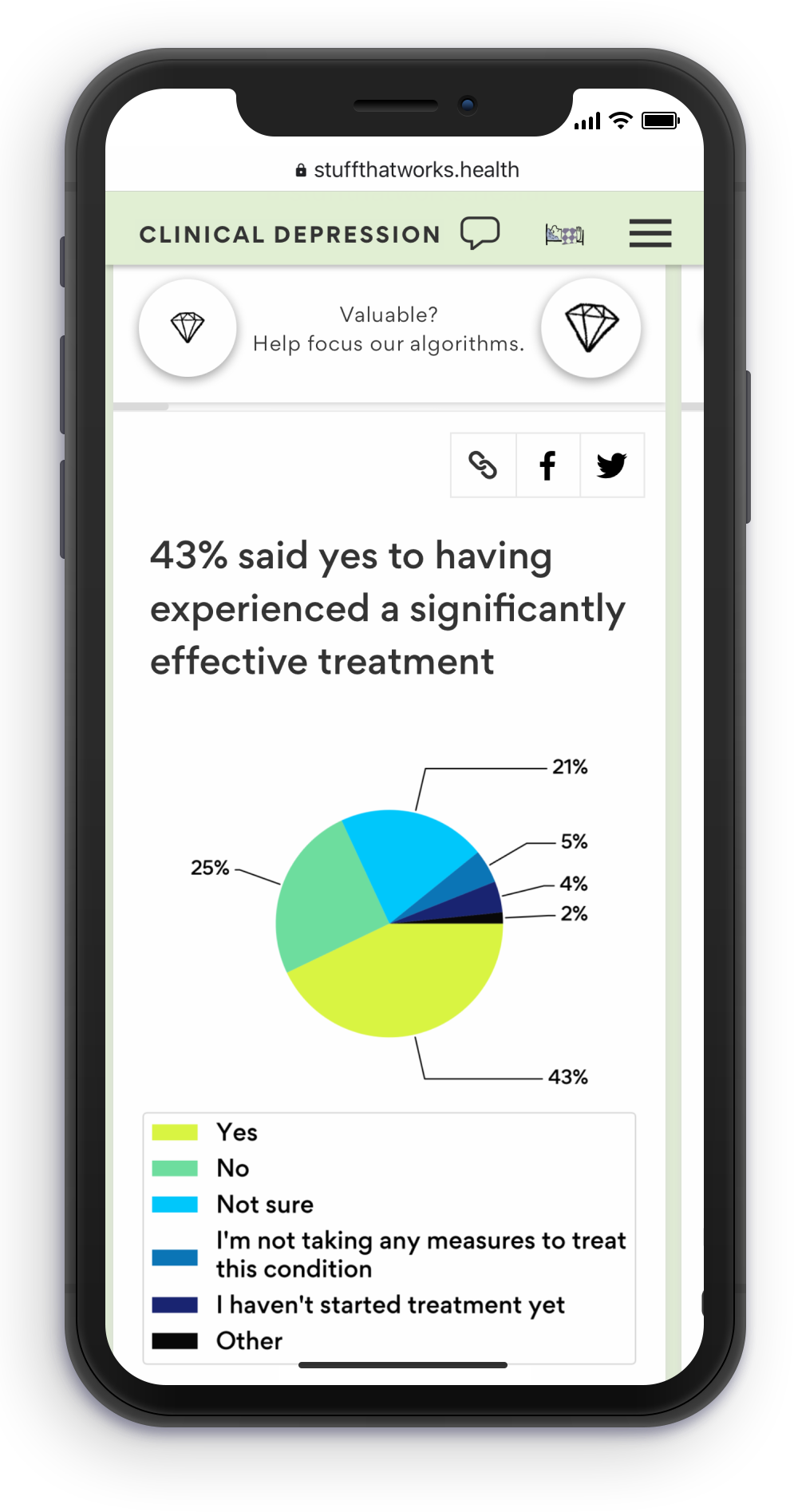 The fibromyalgia community, for example, has 39,422 members and 20,829 contributors who have commented on 1,439 treatments, 413 symptoms and 996 comorbidities. More than 1,000 new contributors are signing up every day, Elish says.

When a StuffThatWorks community has 100 contributors, the site begins to share initial insights, such as age of onset, symptoms, aggravating factors and treatments.

When the numbers in a community reach several hundred, machine-learning algorithms kick in and treatments can be ranked by level of effectiveness. Once thousands of people are contributing, the system can actually predict the most effective treatments.

Among the 110 conditions currently available at StuffThatWorks are relatively common ones like diabetes and ADHD but also rarer diseases such as rhabdomyosarcoma (a type of cancer) and Ehlers-Danlos Syndrome (a disease that weakens connective tissues).

The company raised $9 million for its seed round from Bessemer Venture Partners, 83North and Ofek Ventures.

“Few companies manage to implement crowdsourcing in a way that significantly impacts the world,” says Arnon Dinur, partner at 854 North. “StuffThatWorks has the potential to utterly transform the way the medical community and patients alike around the world approach treatments.” 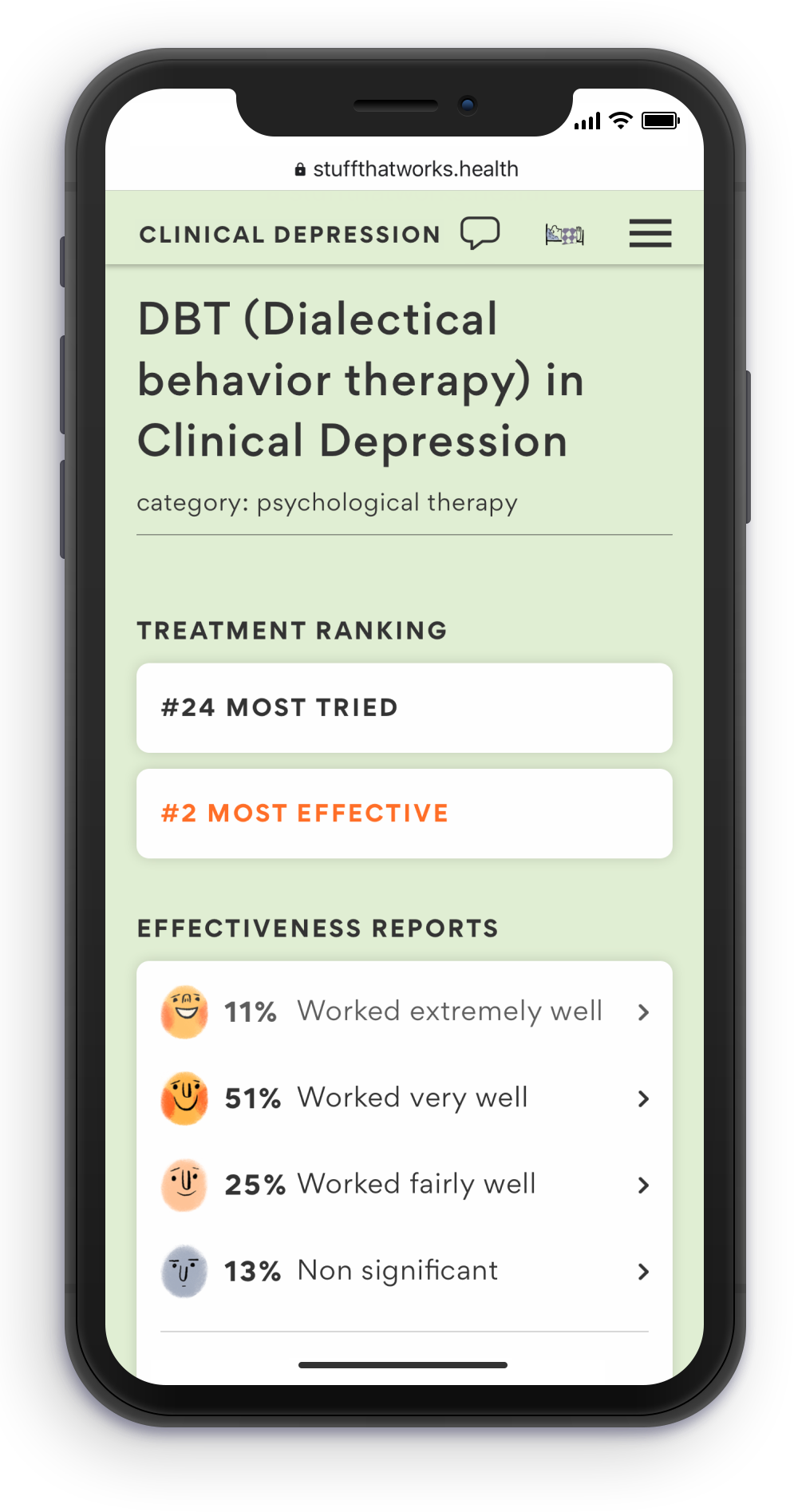 Elish notes that about 10,000 chronic conditions have been identified but only 40 have extensive or established treatments.

Nearly 45 percent of the world’s population suffers from at least one chronic condition. And the Pew Research Center says that over 70% of Americans look up their medical symptoms on Google, a practice doctors discourage.

“The Internet is a terrible place to get research information,” Elish says. Even the best sites “are writing dubious stuff that’s skewed for SEO purposes.”

StuffThatWorks has personal relevance for Elish, who spent years helping her daughter cope with a medical condition. Elish trawled through community forums and resources until one day, almost by chance, she came across a treatment locally in Israel she hadn’t seen before.

Elish calls that her a-ha moment. “The information is out there but the knowledge doesn’t get to you,” she says. “Not for bad reasons. There are just too many possibilities. No one person can be knowledgeable enough to know everything. Even the medical community doesn’t know.”

StuffThatWorks’ algorithms can also ferret out suspicious data, so it doesn’t skew the overall results.

“If we detect that someone’s experience is very different, if all the information they provided is very different than others with the same condition, then we know that match is not good enough,” Elish explains. 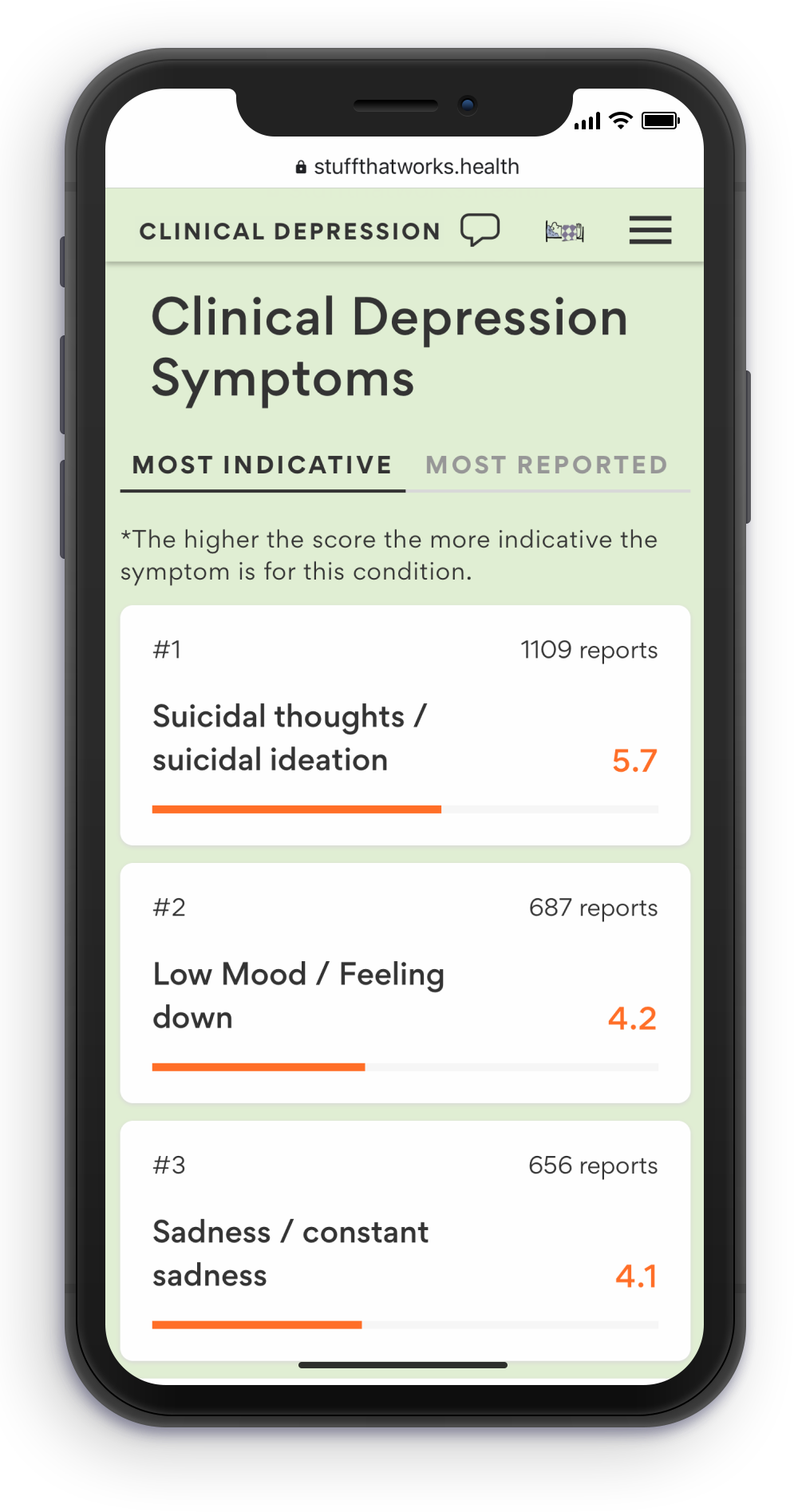 StuffThatWorks reminds us of another startup ISRAEL21c profiled in 2011 – Treato – which crawled the web to aggregate comments from patient forums.

That’s very different than collecting stories from patients directly and turning that into numerical data, as StuffThatWorks does. Treato shut down in 2018.

Indirect competitors include San Francisco-based RDMD, which uses crowdsourcing to connect people with rare conditions to researchers who are developing drugs to address them; Ada Health in Germany, which helps patients check their symptoms via a mobile app; and web diagnosis apps Babylon and Healthily by Your.MD.

The 30-person company is located in Tel Aviv, but during the first months of the coronavirus crisis, Elish relocated about a third of employees to six tzimmers (bed-and-breakfasts) near Kibbutz Sde Boker in the Negev desert.

“We sensed that it would be extremely difficult for our product and design people to work remotely. We needed to be together physically,” especially as the company was gearing up to launch, Elish tells ISRAEL21c. “So, we self-isolated for two months. We were able to lead a free, disconnected life.”

StuffThatWorks is also collecting information about Covid-19 through a detailed survey it has on the site. By using the same big data and artificial intelligence approach, Elish hopes that StuffThatWorks may contribute to knowledge about the deadly disease.

A dashboard where researchers will be able to “access, slice and dice” all the information should be live in the coming weeks, she adds.