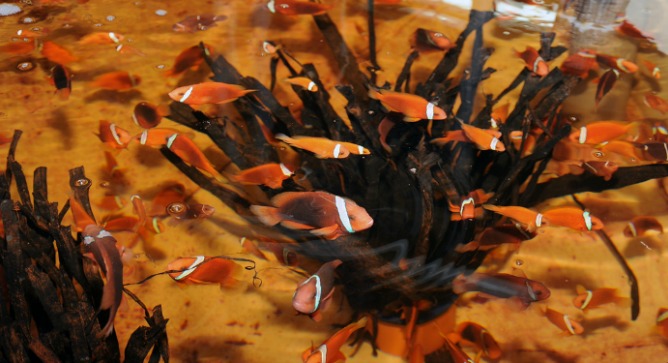 “Nemo” fish being raised at an Arava R&D experimental station.

Guppies and clownfish swimming in the Israeli desert?

Sounds unlikely, but that’s the latest commercial project spawned by Central and Northern Arava Research and Development, a quasi-governmental project set up in 1986 to help farmers in the arid Arava region plan and implement businesses to serve overseas consumers with fresh produce, flowers and fish.

“The first growers started with guppies, a freshwater fish,” Arava R&D director Aylon Gadiel tells ISRAEL21c. “Six or seven years ago, we started looking into marine ornamentals, for which you must create a seawater environment. We started breeding three types of clownfish.”

This colorful variety is better known as the “Nemo” fish, thanks to the 2003 Pixar hit Finding Nemo. Demand for clownfish soared due to the movie’s popularity, but Gadiel says most of the creatures for sale are harvested illegally from the waters of Thailand and other Asian nations.

Now that European Union legislation is poised to squelch this practice, Israel’s clownfish growers will likely produce even more of the sought-after fish.

“It’s a new product,” stresses Gadiel. “Once we had the protocol and interested growers, we gave them fish to start and we taught them how to grow them. We got fish that are not from illegal areas, and it’s a healthier variety.” 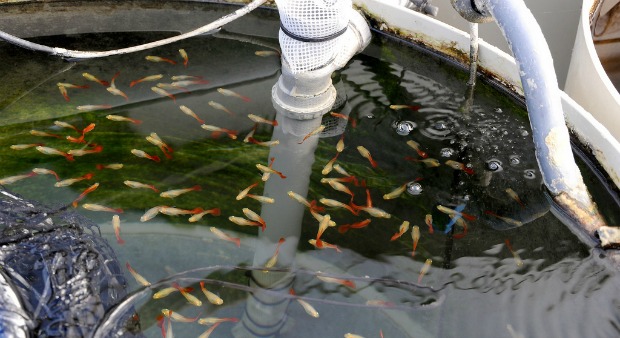 Guppies being readied for the European market.

Not only are the farm-raised fish legit, but they also provide a “green” alternative to capturing their wild cousins. “When you breed them in captivity, you don’t harm the ecosystem,” Gadiel says.

The clownfish concerns take a few years to go commercial, depending on how many starter pairs they invest in. Nemos only reach sexual maturity after nine months, and breeding and raising the fish are complicated procedures requiring time and patience.

“We give the grower knowledge and support until he’s starting to produce his own fish,” says Gadiel. “It took four years just to formulate the protocol. Now these farmers are basically on their own business-wise, but we have ongoing research and we share our results with them.”

“We’re working on new products to give them more opportunities, because our market research shows that when you sell ornamental fish, you need a package. A dealer coming to the airport to get your boxes wants more than one item – not just Nemos but also guppies, koi and other varieties. We have to understand the market and give our growers as much information as possible.”

Swimming in the desert

The arid Arava stretches 180 kilometers (about 112 miles) from the Dead Sea in the north to Eilat on the Red Sea coast, a narrow strip of land that winds from the mountains of the Negev in the west to the mountains of Jordan in the east. 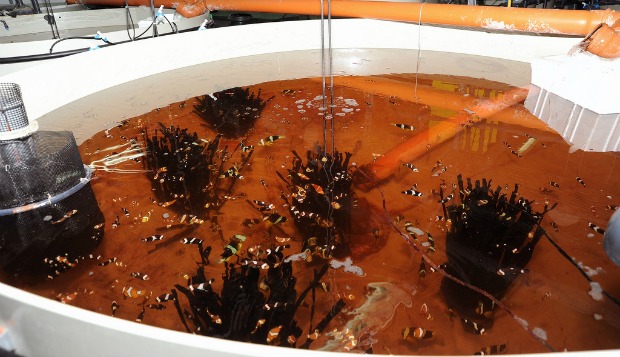 Colorful clownfish are in high demand.

It doesn’t seem like an ideal place to raise fish, but in fact the location offers several advantages, says Gadiel.

“Sanitary conditions are very important when you raise fish because they are delicate animals,” he explains. “We are far from the center of Israel, and that means there is less chance of all kinds of veterinary problems. And because the desert climate even in winter is relatively not so cold, the amount of energy needed to heat the water in the ponds is less than in other places.”

Where does the water come from?

“We’re not yet connected to national water system,” Gadiel says. “The fresh water we use is our own, pumped from underground aquifers. It’s the same water our agricultural fields use, but we treat it to get it even cleaner. For one kind of marine fish we also have to add special salts.”

The fish-growers cannot use recycled wastewater — that is reserved for open fields, animal feed and orchards in Israel — but the protocol works on the basis of a closed system that needs just a small amount added daily to make up for evaporation and to purify the pond.

Gadiel believes this enterprise will grow in popularity, despite the obvious risks and the need for special training — plus a steep minimum initial investment of NIS 200,000 to 300,000. The Israeli government provides some economic aid to the startup farmers.

“Some of the farms went step by step, while others had the means to start a whole farm at once. “It’s a good way for new growers, especially the young generation, to start a business,” says Gadiel.

UNCOVER ISRAEL - Get the ISRAEL21c
Weekly Edition free by email
Sign Up Now!
Bring Israel's story to life.
Millions of people around the world rely on us to gain a deeper understanding of Israel. We are the trusted source for original content you won't find anywhere else.
You can make a difference. Donate today to support journalism that brings Israel’s story alive.
SUPPORT ISRAEL21c
Read more on:   Eco-Living, Environment, Arava Desert, fish