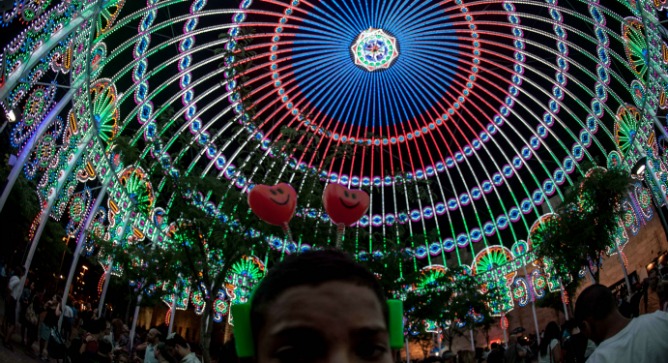 Light sculptures lit up the city of Jerusalem at this year’s light festival. Photo by Uri Lenz/Flash90.

“We didn’t know Jerusalem could get any prettier,” rave two visitors to Jerusalem Lights 2012, Jerusalem’s annual light festival, which took place this year at the start of June.

Light exhibits, sculptures and artistic structures drew about a quarter-million visitors to Jerusalem’s Old City in the fourth and largest event yet in the capital city under the direction of artistic director Eduardo Hubscher and produced by the Ariel Company.

UNCOVER ISRAEL - Get the ISRAEL21c
Weekly Edition free by email
Sign Up Now!
Bring Israel's story to life.
Millions of people around the world rely on us to gain a deeper understanding of Israel. We are the trusted source for original content you won't find anywhere else.
You can make a difference. Donate today to support journalism that brings Israel’s story alive.
SUPPORT ISRAEL21c
Read more on:   Travel, Experience Israel, Jerusalem, Light Festival, Old City of Jerusalem