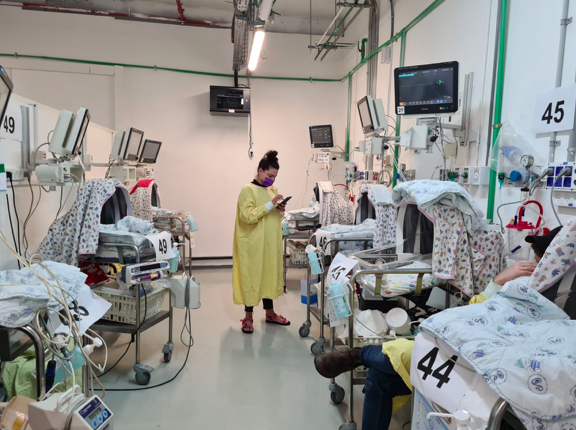 A Sheba Medical Center nurse tends to patients in a rocket protected area of the facility.

Founded as Israel’s national hospital in 1948, Sheba Medical Center today is the largest medical center in the Middle East has been ranked one of the top ten hospitals in the world for three years in a row by Newsweek magazine. Sheba Medical Center plays a central role in Israel’s healthcare system – the Prime Minister put them in charge of Israel’s successful and much-admired Covid-19 effort.

In times of war and crisis, like the one Israel is enduring right now, Sheba’s role is even more central. Located in the middle of metro Tel Aviv, the Medical Center is very much in range of Hamas missiles.  But there is no choice but to continue the work. A fortified underground parking garage at Sheba is equipped to be turned into a patient care area.

When Coronavirus hit Israel, the Prime Minister put Sheba Medical Center in charge of the nation response, and the garage was turned into a Covid ICU. With Israel’s Corona success, the space was recently turned back into a garage.  But only a few weeks later, it has tragically been turned into a neonatal care unit, pictured below.

In addition to its centrality in Israel, Sheba Medical Center also reaches outside Israel’s borders to offer healthcare and healing wherever it was needed.  So many requests came in for Israeli and Sheba Medical Center expertise and help, that they formed Israel’s Center for Disaster Medicine and Humanitarian Response.  And now the requests come in from all over the world.

When a recent military accident resulted in a massive and disastrous explosion in the country of Equatorial Guinea, Israel sent a relief mission of the IDF and staff from Sheba Medical Center. When there were eight Kurdish infants that needed urgent cardiac surgery, they were brought from Iraq to Israel so Sheba’s best pediatric cardiac-thoracic surgeon could operate on them.

In December 2020, Sheba’s Israel Center for Disaster Medicine and Humanitarian Response team, led by Prof. Elhanan Bar-On, sent nearly two dozen members of its battle-tested coronavirus medical team to combat a deadly second wave in the Piedmont region of Northern Italy. As the Coronavirus soared in Brazil, neighboring countries were hard-hit. Uruguay’s Ministry of Health made an urgent appeal to Israel and Sheba Medical Center sent a huge shipment of equipment followed by experts in logistics, treatment and pandemic mitigation.

The talented professionals at Sheba Medical Center are also medical innovators.  In fact, they were creating so much medical technology innovation that they formed the ARC Innovation Center.

The ARC raises venture funds for MedTech innovation and incubates the companies, giving them both support and one of the best testing grounds in the world for their developments. In some cases the medical technology is homegrown at the Medical Center, in some cases they partner with others or bring companies inside. ARC’s ambitious goal is to reshape healthcare by 2030 and numerous new technologies have already emerged from it.

Through the ARC Innovation Center, Sheba Medical Center is a partner in a massive new medical campus planned in Chicago to bring health equity and improved healthcare outcomes to a chronically underserved area of that city, and then from there to other cities across the US.

The Covid-19 pandemic has reminded all of us how interconnected we are, the vulnerabilities we share, and the power we have when we stand together and reach out a helping hand. The Sheba Medical Center represents the best of that notion. When you feel a sense of pride on hearing about an Israeli humanitarian medical mission, odds are it was from Sheba Medical Center.

And today’s attacks from Gaza underline the urgency of having a state of the art medical facility that can operate without pause, even in war. And by supporting the Medical Center, you can become part of the solution. Click here and click “Donate”. And you too can help make your reach exceed your grasp and become part of the health and healing of all of humanity.