If you’d expect Nirit Takele’s artist studio to be splashed and splattered with paints a la Jackson Pollack, think again.

The room is neat, dabs of colors on small pieces of paper hanging on the wall like Post-it notes, and stacks of acrylic paints lined up according to color like orderly vertical rainbows.

Takele, who says she’s 37 or 38 (“I have to check, after I reached 30, I sometimes get confused!” she said, smiling), is an Ethiopian-Israeli artist who does emotional, vivid paintings that make you want to keep looking at them.

During my visit, I noticed a woven basket typical to Ethiopia. She explained that she uses it to make injera, fermented Ethiopian bread, “if I have time, which is almost never.” It takes three days for injera to develop its special sourness, but when she eats it, she feels healthier.

The story of how she and her family came to Israel sounds like a fusion of folktale, grueling journey, and dream.

‘We walked for four days’

“We came from a small village, Kunzila, in northwest Ethiopia,” Takele said.

“We walked for four days and I was about five years old. I don’t remember anything except for a river. I sometimes thought about a boat on the river but I thought it was a dream. When I asked my parents, they said it was real. We had to take a motorboat as part of our trip to Israel in 1991.”

This was during Operation Solomon, when more than 14,000 Ethiopian Jews were airlifted to Israel in 36 hours, including Takele and her parents and three siblings; three more were born in Israel.

She can recall crying during one of her first meals at a hotel in Jerusalem where they stayed with other immigrants.

“Everything about the meal was white,” she recounted. “The plates, the hard-boiled eggs, the cheese. Color was missing. And that was when I cried.”

Her father found work in construction and her mother took care of their house in Rehovot, where they eventually settled.

Takele got good grades in elementary school and was chosen to go to a boarding school. There, she taped drawings on the wall of the school. She always liked to draw, and for her major, she chose art and communication.

The focus was on art history, not practical arts, but this is where she first encountered Michelangelo. One of the few pieces of art in her studio is a copy of Michelangelo’s “Creation of Adam” with hands reaching out to each other. 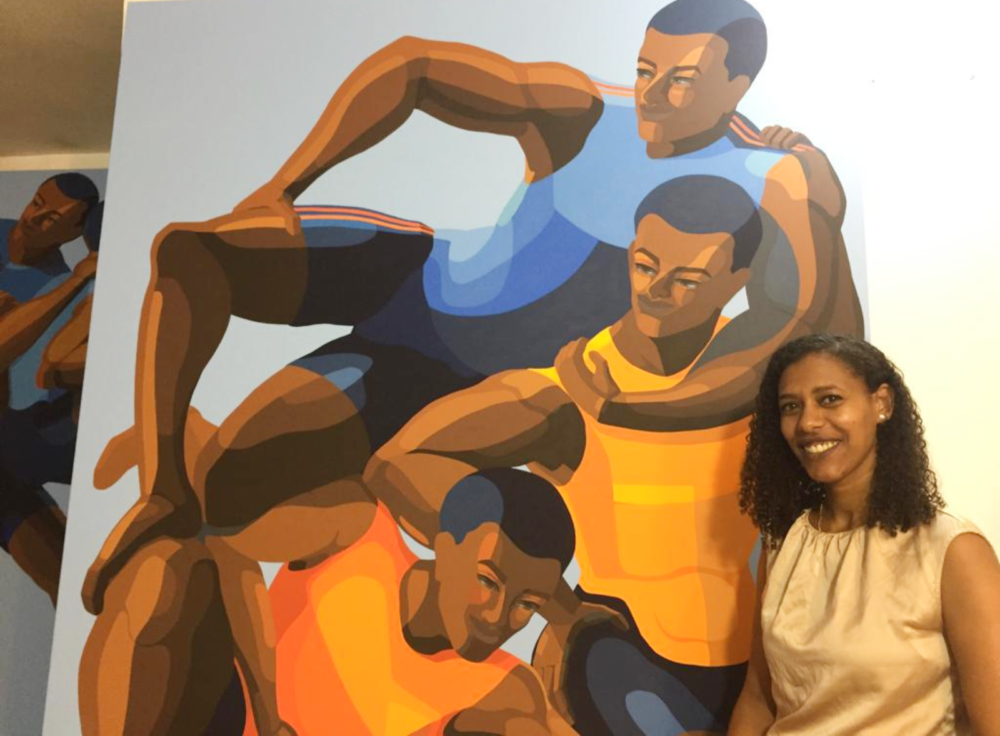 Nirit Takele’s paintings make you want to keep looking at them. Photo by Diana Bletter

‘I wanted to paint’

After graduation, Takele served in the army, and then got a job at a factory working 12-hour shifts, feeling like “I’d lost my soul.”

She began lessons with an art teacher once a week to learn the basics. “I needed to learn everything. I didn’t even know what oil paint was.”

While trying to figure out where to study, she stumbled upon Shenkar College of Engineering and Design in Ramat Gan.

“I didn’t think about my future,” she said. “All I thought about was the present and that I wanted to paint.”

Then it was “four years of survival,” studying during the day and working as a supermarket cashier at night to pay for art supplies and rent.

Because turpentine gave her a headache, she switched from oil paints to acrylics, which are “suitable for my style. They’re very clean.” 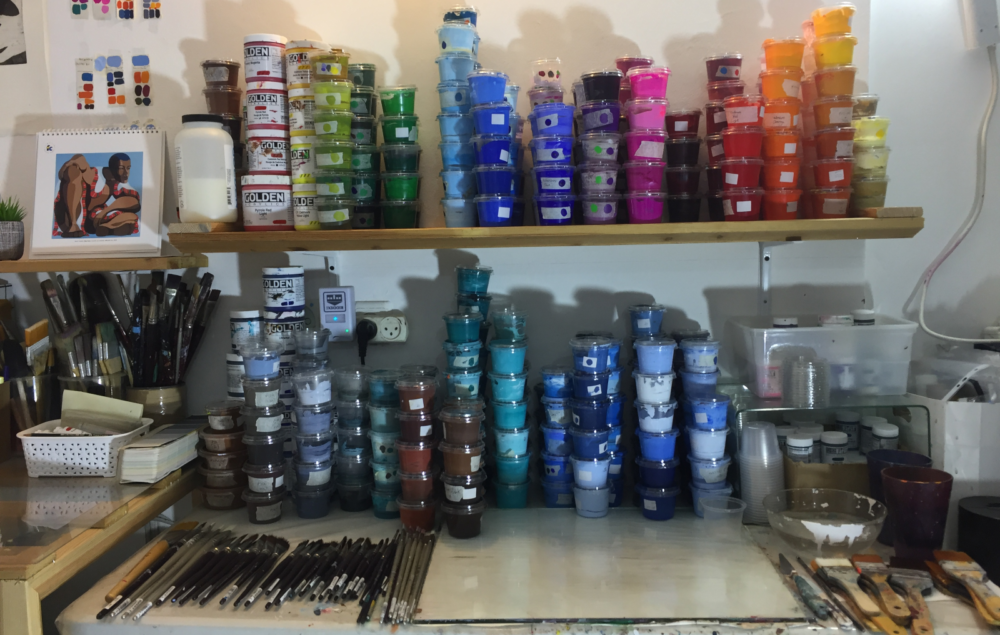 Despite her challenging schedule, she received an award for academic excellence. When her paintings were included in student exhibits, she began to get noticed.

Then, in 2017, she received the Young Artist award from the Israeli Ministry of Culture and Sports as well as the Sotheby’s Under the Hammer Prize during the annual Fresh Paint art fair in Tel Aviv.

Since then, the Tel Aviv Museum of Art, the Israel Museum, and various galleries have scooped up her work.

Suzanne Landau, former chairwoman of the Tel Aviv Museum of Art and chief curator at the Israel Museum in Jerusalem, says, “Takele’s bold, large-scale sculptural and heroic, dark-skinned figures dominate not only her canvases but also the surrounding space.”

There is a waiting list to purchase Takele’s paintings, which also have been exhibited in London, Addis Ababa and New York.

Yet she continues to work at her own pace, painting furiously for a few months, working up to 16 hours a day, and then taking a few weeks off to rest and “free my mind.” She works for herself, on her own schedule.

“I feel so grateful,” she said. “It’s challenging for artists, especially for Israeli artists, to earn a living, and I feel very privileged.”

The reality of skin color

Takele paints from her imagination, telling her own story or stories that have been passed down from generation to generation. She feels that her paintings serve as a medium to communicate what it is like for her community in Israel.

One of the most pivotal moments for Takele was sitting in one of her classes about European art and becoming aware of the subject matter.

“There is a fair-skinned person front-and-center, and then a dark-skinned figure in the background, sometimes a servant,” she said. Before then, she never had a problem with the color of her skin.

“It was not in my mind. I never had situations when I had to defend myself.” At art school, she was the only dark-skinned person in her year. Sometimes, she was the only dark-skinned person at the school. Yet she was aware that she was seeing herself “only in the background. It made me feel not represented. I wanted to do something to correct it.”

Before that moment, Takele’s style was pop-art and she painted colorful faces. The reality of the skin color wasn’t important. But suddenly, she gave more attention to skin colors. In her recent series, she has focused on men. Their specific facial features are not as important as the composition, the movement, and the bodies.

“It was during corona and the men in my paintings do not keep their distance,” she said. The figures are reminiscent of Matisse’s dancers, only they’re entwined in what she called a “ballet and a balagan,” the Hebrew word for chaos.

The background is empty because Takele wants the viewer to focus on the figures. She doesn’t even sign her name to distract; she writes it on the back of the canvas. She uses her Hebrew name, Nirit, but her Ethiopian name, Tegaye, still forms a part of who she is.

When Takele was in Ethiopia for a two-month residency program with Addis Fine Arts in Addis Ababa, she went back to the village of her birth and initially didn’t feel a connection. And then she met passerby who turrned out to be a childhood friend of her father’s brother.

“He knew the names of my family and I suddenly felt different. I think now how wonderful it is that a stranger gave me my connection to the place.”

One of the paintings hanging on a wall of her studio was commissioned for the new building of the House of Ethiopian Jewish Arts in Beersheva. An arch in the background emphasizes the windows of the building. It’s as if one is looking through the window, seeing Ethiopian artists at work in pottery, weaving and basket-making.

Takele’s painting is bold, vivid and alive, offering a memory of what once was in the past while at the same time, preserving it for the future.