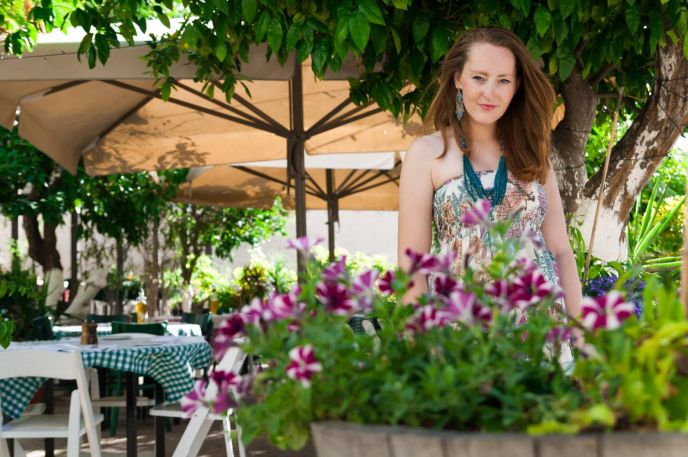 For Johannah Jolson — in the words of fellow Brit William Shakespeare — the play’s the thing.

In August, the 28-year-old Tel Aviv resident launched the English National Theatre of Israel (ENTI), an endeavor meant to make professional English-language productions available nearly every night of the week in the Holy Land.

“At the moment, there is a lot of community theater in Israel — which doesn’t necessarily equal non-professional standards, and a few even have paid actors,” Jolson tells ISRAEL21c. “But it tends to be sporadic, with no one organization presenting English-language theater all the time. I saw a need to provide a platform for that and develop it to a point where we have our own residency space in Tel Aviv and are also touring.”

ENTI’s introductory show was a one-woman play from Orange Shade Productions in the UK, “When the Sky Falls In,” written and performed by British author and broadcaster Janet Gershlick and presented at the café-bookshops Tmol Shilshom in Jerusalem and The Prince in Tel Aviv. The play contains several Jewish references that Jolson felt would resonate.

“I want to produce theater that is relevant to Israeli culture. I want to open the door to all Israeli writers and writers from around the globe who have an interest in Israel, to be heard by a whole new Anglo audience,” says Jolson, who holds a degree from Guildford School of Acting in Surrey.

“I’m starting with lots of partnerships and co-productions, like with Orange Shade. I learned from my experience producing in England that this is the way to go for a young company.”

The next show in the lineup, “Gam Zeh L’Tova,” is “a very funny piece written, developed and performed by an observant woman in England, giving a lighthearted look at what it means to be Orthodox in Manchester,” Jolson says. It’s slated for early next year in Tel Aviv and Zichron Ya’akov.

“I had no connection to my Jewish heritage. My mum’s friend wanted her daughter to go on Taglit-Birthright and she thought if I went, her daughter might go, too. In the end, I went but her daughter didn’t,” she recalls with a laugh.

“I loved it, and while on the trip I rediscovered my Jewish heritage. I wanted to come back and explore more, so I looked for potential performing jobs.”

Jolson got a gig through a British entertainment company, singing in resort hotels at the Dead Sea and Eilat. After three months, she joined Masa Israel Journey, a project of the Jewish Agency for Israel. For 10 months, she volunteered up north at Kibbutz Kishorit for people with special needs, and in a community center in Dimona down south. 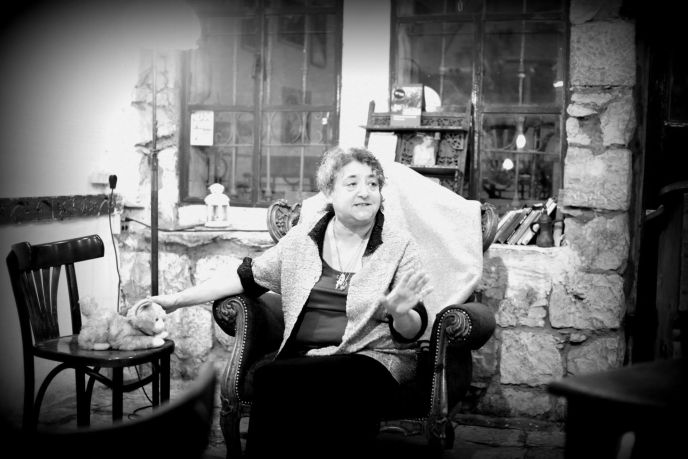 Janet Gershlik in “When the Sky Falls In.” Photo by Yael Katz

She was one of 100 Masa participants chosen to attend a weeklong leadership summit, and among 14 selected to follow up with a five-month fellowship at innovation incubator PresenTense.

There she got the mentoring and initial connections to develop a business plan, do market research and ultimately launch ENTI. Its first “appearance” was as associate producer for the American play, “An Iliad,” presented in Jaffa during the summer.

To test the waters, she sent out an online survey to which responses fell into two categories: Those who saw no need for anything more than the existing community English theater groups in Israel; and self-described serious theater-goers eager for something they perceived as more professional.

“What I’ve tried to do with our name and our marketing is to show we are of a certain standard,” says Jolson.

She is in discussions with the Israeli branch of the British Council, an organization that uses arts and culture to forge links between Britain and other countries; and with Tik-sho-ret, a production company for Jewish and Israeli theater in England. She and Tik-sho-ret founder Ariella Eshed hope to do an exchange program next year for British and Israeli playwrights.

“Really exciting to see how the performing arts helps young people to engage with the English language,” she reported on the group’s Facebook page. “We are still very interested to hear from potential partners nationwide, and from young people who might be interested to join the Youth Theatre program as it develops and expands.”

Jolson plans for the theater to produce its own work, collaborate with other companies and individual artists, and bring English-language theater “in all its forms” to Israeli schools and communities, especially in areas where English comprehension is weak