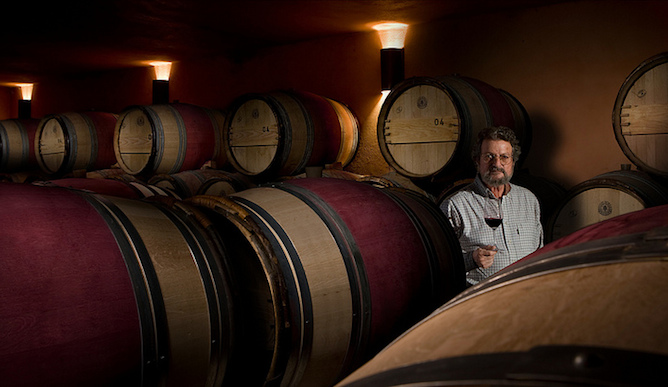 The 69-year-old winemaker in his cellar.

“Thank God for the snobs,” says award-winning Israeli wine-maker Eli Ben Zaken, with a glint in his eye. “They’re the ones who shape fashion and raise standards of taste, even when they don’t understand much about it.”

Ben Zaken’s winery, Domaine du Castel, is located on a plot of land beneath his home on the moshav (cooperative village) of Ramat Raziel. It is there that the 69-year-old former restaurateur and his four adult sons have been producing some of the best wines in the country since 1983. These include Cabernet Sauvignon, Merlot, Chardonnay and Petit Verdot.

But Ben Zaken does not see himself as a maverick in the industry. “I’m a hitchhiker,” he says.

Perhaps. Nevertheless, Ben Zaken was one of two Israelis to be honored with the French National Order of Agricultural Merit this year. The prestigious award was presented to Ben Zaken and Ben-Gurion University’s Professor Pedro Berliner at the French Embassy in Tel Aviv on November 27.

This is fitting for someone who turned a modest family business, using locally grown grapes to produce two barrels of wine a year, into a thriving, 13-hectare enterprise with an annual output of 8,000 cases.

Ben Zaken tells ISRAEL21c about Jewish history in relation to wine and its effect both on Israeli attitudes to the drink and on his personal journey.

“It’s a small country with huge amounts of energy, where everything has to be done fast,” he says about Israel. “After hundreds of years of disregard, there was a sudden shift. At the end of the 1980s and beginning of the ‘90s, the market grew thirsty for good wine. It was a matter of demand.”

Ben Zaken traces this back to the abolition of the tax on travel abroad. “The borders opened up, and Israelis began to travel, and that is when they learned to eat really good food and drink quality wine.”

He was once asked if he wouldn’t rather be making wine in France. “My answer was that if I were there, nobody would know who I was among the thousands who engage in that enterprise. In a country the size of Israel, one has the advantage of being able to stand out.”

Born in Alexandria and educated in England, Italy and Switzerland prior to his immigration to Israel, Ben-Zaken notes that Jews are supposed to begin every Shabbat and holiday meal with a blessing recited over a cup of wine.

“For 2,000 years, spread out in the Diaspora, the Jewish people had to produce kosher wine to fulfill the commandment to drink it. We did this in our yards or wherever we could manage it, sometimes out of raisins; and with lots of sugar, so that it would last all year. It was thus very bad wine — more like medicine one has to take. That was a tradition that is not easy to change.”

It was not until the end of the 19th century, he recounts, that the modern wine industry in the Land of Israel was born via the Carmel Winery, founded in 1882 by Baron Edmond James de Rothschild, owner of the Bordeaux estate Chateau Lafite-Rothschild.

At that time, says Ben Zaken, there was still no demand for quality. “The Jews who began to assimilate knew that if they wanted good wine, they could drink a good French wine, and for kiddush [blessing over the wine], they would drink bad wine,” he explains. “And for this reason, Carmel based its business not on taste, but on the fact that it was kosher.”

For a wine to be certified kosher, its production from start to finish must be overseen by an observant Jew. When Ben Zaken started out in the business, he did not think it necessary to make kosher wine. However, exporting non-kosher wine led to flat sales.

“I would approach an importer in a foreign country and he would taste my wine and love it. Then we would go to store owners, and they, too, would taste and love it. But then the wine would get stuck on the shelves, because customers were not able to taste it, and they were not willing to take the risk of buying an expensive Israeli wine they did not know.”

He learned that it is hard to build an overseas following for Israeli wine – even really good wine – without the kosher-keeping segment of the Jewish market. And exporting is critical to success.

“It is good for the winery, because recognition comes from abroad. It is not enough for Israeli wine critics to like it; it has to have international approval in order for it to be really successful. And if it is not written about outside of Israel, it will remain on the shelves outside of Israel.”

Walking in the barrel-lined cellars below the winery’s administrative offices, Ben Zaken says there was also an emotional reason behind his decision to produce kosher wine, though he is not an observant Jew himself.

“I aspired to produce the best Israeli wine and show it off to the world,” he says. “But then most of the Jews in Israel and the Diaspora would be forbidden from drinking it. That would be absurd.”

Since he started out in the business 30 years ago, he finds that he spends less and less time tasting other brands of wine.

“If I taste wine that’s not good, it’s a waste of a drink,” sums up Ben Zaken, who prefers white to red. “And if I taste a wine that’s really good, I’ll be envious.”

UNCOVER ISRAEL - Get the ISRAEL21c
Weekly Edition free by email
Sign Up Now!
Bring Israel's story to life.
Millions of people around the world rely on us to gain a deeper understanding of Israel. We are the trusted source for original content you won't find anywhere else.
You can make a difference. Donate today to support journalism that brings Israel’s story alive.
SUPPORT ISRAEL21c
Read more on:   carmel, grapes, People, Culture, Art in Israel, Food and Drink