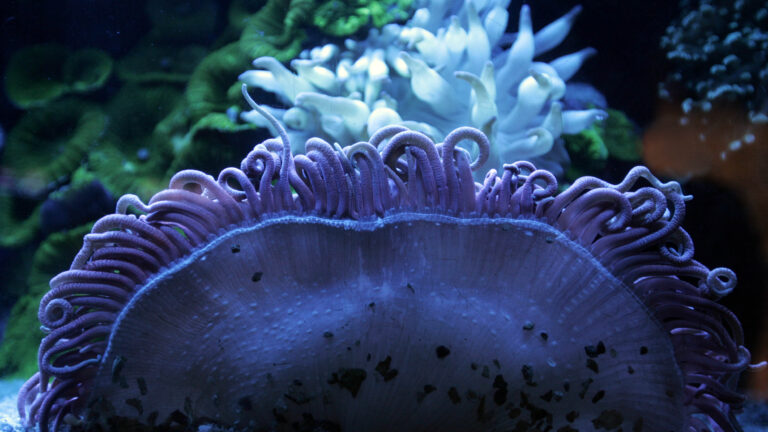 Anemone at the underwater observatory marine park in the Red Sea in Eilat. (Anna Kaplan/ Flash90)

Israel’s colorful coral reefs already attract scuba divers and snorkelers from across the globe. Now marine scientists say the Red Sea resort’s underwater shoals could become one of the last refuges for coral reefs in the world’s warming oceans.

The Hebrew University of Jerusalem and Bar-Ilan University researchers looked at how the region’s coral reefs would respond to climate change. One of the main factors behind the worldwide problem of coral deterioration is bleaching.

In 2005, the US lost half of its coral reefs in the Caribbean in one year due to a massive bleaching event.

Coral bleaching occurs when the seawater is too warm and corals expel the algae living in their tissues. The coral then turns completely white and usually dies soon after.

The researchers — Prof. Amatzia Genin of the Alexander Silberman Institute of Life Sciences at the Hebrew University; Dr. Hezi Gildor of the The Fredy & Nadine Herrmann Institute of Earth Sciences at the Hebrew University; and Dr. Maoz Fine of the Mina and Everard Goodman Faculty of Life Sciences at Bar-Ilan University — found that the coral reef in the Gulf of Eilat is less susceptible to bleaching thanks to a “warm-water barrier” at the southern Red Sea, allowing only heat-tolerant genotypes of corals to enter the Red Sea from the Gulf of Aden.

The scientists say bleaching is unlikely to occur in the Gulf of Eilat/Aqaba in the next 100 years, making it a unique refuge for coral reefs in the world’s warming oceans.

The findings, entitled A Coral Reef Refuge in the Red Sea, will be published on September 23, 2013 in the journal Global Change Biology.