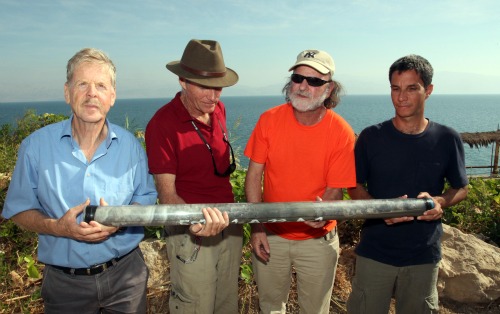 Forty scientists from six countries have converged upon hotels at Israel’s Dead Sea – the lowest point on earth – but not for a spa vacation. They’re staying at this popular resort to reap the rewards of a historic drilling project to extract a continuous core sample from hundreds of feet below the surface of the sea.

The information likely to be revealed by the many-layered material, extending back to four ice ages ago, could help experts to better understand many phenomena – from earthquakes and climate change to prehistoric human migration and cultural evolution.

Specialists from the German-based International Continental Scientific Drilling Program (ICDP) began work on November 15 to drill a borehole through which the data-rich sediment will be brought to the surface. The $2.5 million budget allows them 40 days to complete the task, so they’re working in two shifts around the clock, about four miles off the Ein Gedi shore.

Dr. Michael Lazar, a marine geoscientist at the University of Haifa, spoke with ISRAEL21c from the drill site. As project manager, he coordinates between the scientific and drilling teams, arranges for analysis and storage of the samples and myriad other details – in short, “making sure everybody knows what everyone else is doing.”

Lazar also provides updates on the project’s Facebook page and on the ICDP website. The November 22 entry reads: “The first part of the day went well and recovery was pretty good. After a while, a thick (estimated by the driller to be around 50 cm [20 inches]), hard layer of salt was encountered. The piston core could not penetrate it so they brought out the ‘Alien’ – their custom made rotary bit. While it managed to drill through the salt, recovery of the layer and the material beneath it was lost. Switched again the piston and recovery increased in the muds to 100%.”

Though it’s clearly not a simple operation, the potential yield of information is so vast that the project has attracted multinational interest and includes Jordanian and Palestinian geologists and geophysicists. 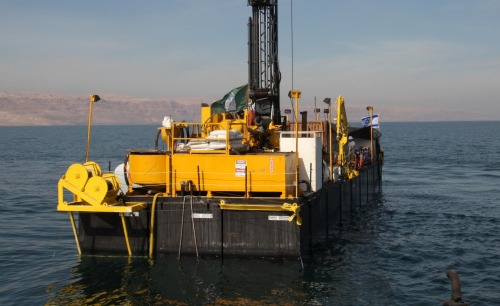 Photo courtesy of Sasson Tiram Photography.
Forty scientists from six countries are gathered at the Dead Sea for the historic project in which a continuous core sample will be extracted from hundreds of feet below the surface of the sea.

Originally planned about 10 years ago by Israel Prize winner Prof. Zvi Ben-Avraham of the Minerva Dead Sea Research Center at Tel Aviv University, Dr. Moti Stein from the Israel Geological Survey and Prof. Amotz Agnon from the Institute of Earth Sciences at the Hebrew University of Jerusalem, the project was stalled by the Palestinian uprising in the first half of the decade. Once the situation improved, the ICDP accepted the Dead Sea Drilling Project as one of its two annual ventures for 2010.

“The delay does not affect the findings, since we are looking at a record of 500,000 years,” Ben-Avraham tells ISRAEL21c.

He adds that the project is environmentally risk-free. “We are drilling in the center of the basin, away from active faults, and also use environmentally friendly materials for the drilling,” he points out. “In addition, we keep the area very clean.”

Ensuring the future of the sea

Despite its name, the Dead Sea is not dead, Lazar continues, “There are bacteria and algae making up a fragile ecosystem, and we’re very aware of it.” In fact, one goal of the research is to study the past, to ensure the future of this unique body of water, known in Hebrew as the “Salt Sea.” 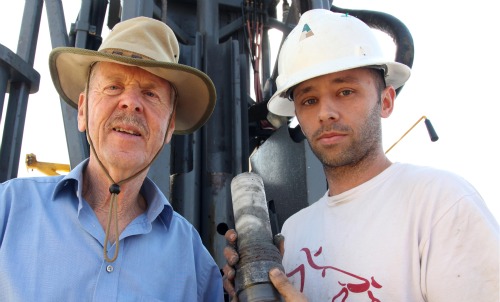 The project is being conducted in partnership with the Israel Academy of Sciences and Humanities and with the cooperation of Kibbutz Ein Gedi, the Dead Sea Works and the Tamar Regional Council of the Dead Sea. Sponsors include the Israel Geological Survey; Tel Aviv University; Hebrew University; the Lamont-Doherty Institute; Columbia University, New York; the GFZ Institute of Potsdam in Germany; the International Research Center for Japanese Studies in Kyoto, Japan; and the University of Zurich, Switzerland.

Scientists from a broad range of disciplines are approaching the project from myriad angles. “The geochemists may be interested in the chemical composition of the water, or of air bubbles in the sediments, or of the clay,” Lazar relates. Tectonics experts are studying the way an earthquake disrupts the orderly pattern in which undersea mud is deposited, correlating evidence of earthquakes with historical events, and delving into the mechanics of rock formation.

Until the completion of the drilling, samples will be analyzed at the Ein Gedi Shore Research Station, made available to the project by Moty Gonen Sea and Diving Works. Afterward, they’ll be transferred to a specialized lab at Bremen University in Germany, where all the scientists involved will have access to them.