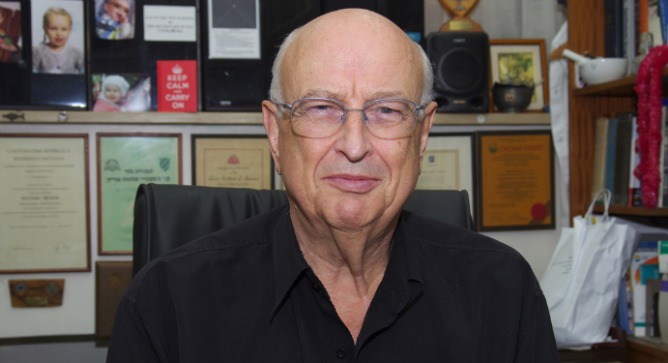 There was never a doubt that Michael Belkin would grow up to be a scientist – if he managed to reach adulthood unscathed from the grandiose experiments he staged as a young boy in Tel Aviv.

Now director of the Ophthalmic Technologies Laboratory at the Goldschleger Eye Research Institute of Tel Aviv University and Sheba Medical Center, the prominent ophthalmologist recalls melting down lead fragments from Egyptian bombs to fashion toy soldiers. Back in 1948, when he was just seven years old, who knew that lead was harmful?

He and a friend tinkered in their makeshift chemistry lab at the top of their apartment building’s stairwell, and got into all sorts of creative mischief.

“One time, we blocked the drainpipes from the roof and opened the spigots and tried to make a swimming pool up there until we were caught – fortunately, because the weight would have brought the house down,” he tells ISRAEL21c.

Belkin survived all self-made and external dangers, becoming an internationally recognized, award-winning eye researcher. He has written hundreds of scientific publications and holds many patents for ophthalmic devices.

The former president of the Israel Society of Eye and Vision Research and chairman of TAU’s department of ophthalmology advises several companies in the fields of lasers, optics, ophthalmic devices, pharmaceutics and biotechnology.

One of his newest published studies shows that Israel is the only country to have reduced rates of preventable blindness by more than half in the past decade. It is likely that some of the methods and devices Belkin innovated helped to bring about that achievement. 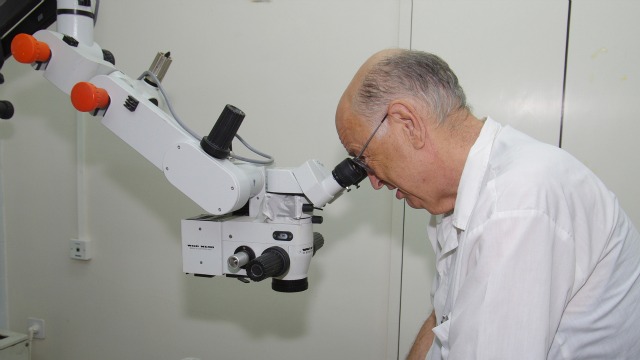 The ExPRESS miniature glaucoma shunt implant, used by eye surgeons worldwide, was Belkin’s idea and has dramatically advanced the way this condition is treated. “Before, we used to make uncontrolled holes in the eye to reduce the pressure and drain the fluid,” he relates.

During the three years he was director of research, development and non-conventional warfare medicine in the Israel Defense Forces Medical Corps, Belkin developed military goggles to protect soldiers’ eyes. This was in response to the many preventable eye injuries suffered during the 1973 Yom Kippur War, in which he commanded a medical battalion. The final version of these goggles is still in use.

Though he stopped practicing medicine in 1977 in order to direct the lab at the research institute, he found his calling in ophthalmic problem-solving.

Now he is working with Bar-Ilan Prof. Zeev Zalevsky on a bionic contact lens that helps the brain decipher images through the touch receptors on the surface of eye.

Belkin is also studying how a beta-carotene powder made from algae improves the vision of patients with genetic eye diseases. 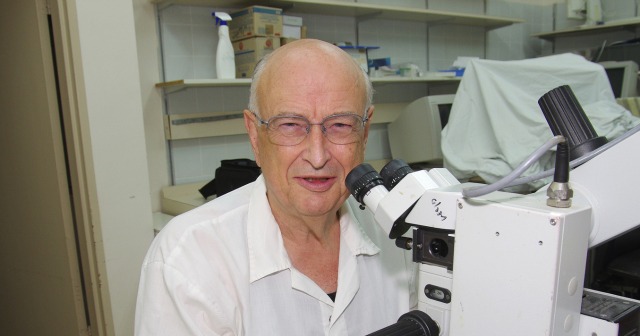 “It’s a nice Israeli story that couldn’t have happened anywhere else,” he says.

The story began on a lagoon off the coast of Sinai, where an Armored Corps company commander, Ami Ben-Amotz, discovered a rare orange alga while on reserve duty. He put it in his water canteen to show his PhD adviser.

“No other place in the world would an army company commander be a PhD student concurrently,” Belkin narrates.

Ben-Amotz did his thesis on that seaweed, which contains a substance analogous to a major component of vitamin A. He founded a nutraceuticals business, Seambiotic, to sell the algae to Japan for cosmetics.

Ben-Amotz later did joint research with Dr. Dror Harats, a colleague of Belkin’s at Sheba Medical Center, showing the algae is beneficial for diabetes, cholesterol and psoriasis. When Seambiotic’s Japanese clients came to Israel to investigate, Harats asked Belkin to sit in on the meetings – and so he learned about the beta-carotene.

“In the eye, we have a similar substance that gets screwed up sometimes, and here I had a replacement,” Belkin marvels. “We tried it on people with rare congenital eye diseases and they were all improved or cured by taking four capsules a day. Then we tried it for retinitis pigmentosa, which is more common, and it improves about a third of the patients. Now we are doing a large study and I hope to show it really does work on a large scale.”

Belkin earned a master’s degree in natural sciences at Cambridge University before entering medical school at the Hebrew University of Jerusalem.

“During my internship, I found ophthalmology by far the most elegant [specialty] because it’s neat, delicate and clean,” he says. “At that time –1969 — we operated on cataracts only when they were mature. Patients came in blind and went out seeing. It was such a joy.”

Belkin’s wife of 46 years, Ruth, is a sociologist specializing in creating and organizing self-help groups. They raised their two daughters and a son in Givat Shmuel, near Sheba’s Tel Hashomer campus. He jokes that his children “went over to the dark side — all three have MBAs.”

His middle child, Danny, is an apple that didn’t fall far from the tree. With a PhD in immunology from Cambridge, he heads business affairs at the Singapore Eye Research Institute. “The only problem with that is that my granddaughter is with him,” Belkin says, but his eldest daughter’s seven-year-old son is right here in Israel.

At 72, Belkin reads Terry Pratchett comic fantasy novels in his occasional leisure time, and has no plans to retire. “I will die with my boots on,” he declares.