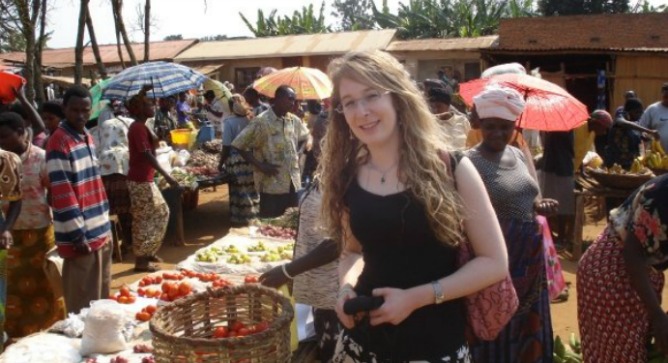 Caylee Talpert from the Pears Program at the Harold Hartog School of Government and Policy at Tel Aviv University, in Rwanda.

Talpert is part of a growing social movement called IsraelDev, launched last year. Like social technology incubators to propel social and green technologies into the future, IsraelDev devotees, together with DevTech Hub — the initiative within IsraelDev that focuses on private sector development — think that existing and new Israeli technologies can serve a needy, but massive, market of people in the world who live on just a couple of dollars a day.

“If you look 10 or 20 years ago, the term ‘clean-tech’ didn’t exist,” Talpert tells ISRAEL21c. “The term was coined and now when you look at any venture capitalist’s portfolio, clean technologies are there. In 10 years’ time we want to see dev-tech next to high-tech and clean-tech on a VC’s portfolio in Israel, and Israel as a world leader.”

If you put all the pennies and dollars together, there is a huge market potential, Talpert says. “The purchasing power is five trillion US dollars and Israel is only now starting to tap into the potential here.”

Not looking for exits

But it’s not just about bucks. Talpert recognizes that not all young Israelis are out to develop the next mobile app and make an exit of millions of dollars. Some want foremost to make the world a better place, socially and environmentally.

There is a chance for all those markets to meet. “When you look at Africa and all the tech hubs there, there are applications from remote diagnostics to farmers using applications to check their crops. There are a lot of for-profit opportunities, and Israelis don’t know about that.”

Talpert and her partners started DevTech out of the Pears Innovation and International Development Program at the Harold Hartog School of Government and Policy at Tel Aviv University, initially to raise awareness about Israel technologies in general. The hub works closely with IsraelDev to boost Israeli technologies.

Together, they aim to help new entrepreneurs and companies with tech products leapfrog over development hurdles, and instead of just focusing on the American market for product launch, to see developing markets as a primary goal.

DevTech is already promoting and helping make connections for a number of Israeli technologies pinpointed for the developing world.

WHO sees potential in Israel

There is the pain-free and bloodless circumcision technology called PrePex that uses a ring to cut off circulation to the male foreskin. After a week, the dead skin falls off and the man is better protected from HIV infection.

Or consider the Israeli company Nova Lumos, which allows people in developing countries to access solar power using a cellular phone. Instead of paying a large upfront fee, as is the case in the developed world, customers put down a small down payment, and then make small future payments for solar power over the cell phone, like paying for a phone call.

There is MigrantHealth, developed by young doctors in Israel as a means to track and manage the medical records of people in transition, whether they be refugees, migrant workers or others without healthcare coverage.

MigrantHealth aims to provide a platform so that doctors at different points of care can manage the healthcare of people who are not in “the “system.”

These are just a few of the companies that Devtech is helping to promote and grow with IsraelDev, the networking platform supported by the Pears Foundation, based in the UK.

At the Dev4Dev Cleanweb Hackathon in November, organized by IsraelDev and Terra Ventures, “Developing Apps for the Developing World” will be the theme to connect the Israeli entrepreneurial and tech community to the DevTech mission.

Talpert, who is appointed as a special tasks manager for this non-academic project, really aims big: “The grand vision is to make Israel the center of innovative technologies for the developing world.”

“The idea is to formalize what we are doing to develop a structure with mentoring – possibly a business model for innovation for the base of the pyramid. In the end, winners [of events like the Pears Innovation for Development Challenge] will be sent to the developing world to do research, to raise awareness and build more businesses in this field,” Talpert says.

UNCOVER ISRAEL - Get the ISRAEL21c
Weekly Edition free by email
Sign Up Now!
Bring Israel's story to life.
Millions of people around the world rely on us to gain a deeper understanding of Israel. We are the trusted source for original content you won't find anywhere else.
You can make a difference. Donate today to support journalism that brings Israel’s story alive.
SUPPORT ISRAEL21c
Read more on:   Activism, Humanitarian Aid, Caylee Talpert, Social Action, hackathon