Photo by Daniel Dreifuss/Flash90
A woman goes for dental treatment.

Going to the dentist is never a picnic, and dentists understand how their patients feel. That’s why they are constantly trying new technologies to make treatment less unpleasant.

For instance, instead of subjecting patients to the dreaded drill, some 12 percent of dentists worldwide now use Erbium (Er):YAG lasers to shape teeth and gums for treatment. However, the wired optic fibers that deliver the laser beam are unwieldy and difficult to focus precisely.

“It’s wireless, too. The laser mechanism is included inside the hand piece that the dentist uses inside the patient’s mouth, making it easier to manage — no wires or connections needed. “

Just as the mobile phone freed the world from wires, so has the LiteTouch freed dentists from traditional tools as well as bulky optic fibers, making laser dentistry completely portable, claims Prigat. “The LiteTouch system is cost-effective and a step up toward a completely high-tech clinic.”

They know the drill

And for dentists who miss the comforting sound of the drill, the LiteTouch vibrates like a drill — although fortunately for patients, it doesn’t hurt like a drill since it’s laser-based.

“With LiteTouch, the concept is to actually imitate the turbine drill,” explains Prigat. “Dental education includes the use of the turbine drill, so dentists know what a turbine drill is and manufacturers of dental lasers do not want to reeducate them. We want to give them a device that they can hold in their hand and that they can immediately start working with, and LiteTouch gives them precisely that.”

The LiteTouch has other benefits as well — like saving energy. In a traditional laser system, says Prigat, the laser energy’s output, transmitted via the optic fiber, weakens by 25-40 percent along the fiber. Without the need for fiber delivery, the Israeli product does away with a fragile and expensive system that requires the dentist to learn and use special operation procedures. 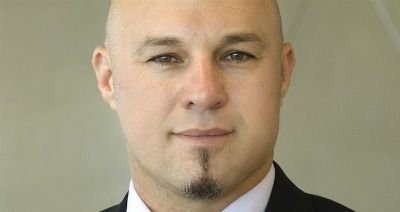 Weighing in at 20 kilograms (44 pounds), LiteTouch is by far the smallest Erbium: YAG-Laser device in the industry compared with other laser devices and drills, according to the company. That significantly reduces typical occupational health discomfort experienced with old-generation lasers, such as hand arthritis and shoulder pain, Prigat says. Yet it’s powerful and versatile.

With a workforce of about 65 people, seven-year-old Syneron Dental Lasers is a fully owned subsidiary of Syneron Medical, known for its innovations in the non-invasive aesthetic device market. The LiteTouch has been commercially available since 2007 and has EU and FDA approval. It has proven popular in several European and Asian countries, and outsells all other Er:YAG systems in Germany, Prigat reveals. 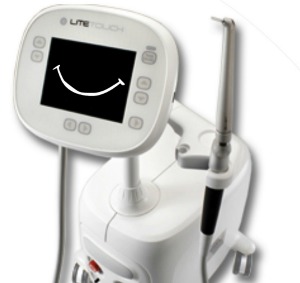 The Syneron device allows dentists to work on teeth without wires or connections.

According to numerous studies, the product has proven superior clinical results, with less pain and faster healing. Consequently, patient retention and growth rates are significantly better for dental practices that use LiteTouch, Prigat says.

Last September, Syneron Dental was named one of the 10 fastest-growing companies in Israel in Deloitte’s Technology Fast 50, which lists firms by revenue growth percentage over five years. Prigat expects that growth to continue.

“LiteTouch is finally fulfilling the promise that the industry gave to dentists,” he says, “that a laser can change their dental life.”