A massive algae bloom that turned the Dead Sea red in the 1980s convinced scientists that there was life in that famous inland salt lake after all. A new set of studies by underwater researchers indeed shows that Israel’s Dead Sea holds a vast number of living secrets waiting to be revealed.

Positioned in the lowest spot on earth, more than a thousand feet below sea level, the Dead Sea offers plenty more than a nature lover’s vista. Its black and slimy mud is a remedy for skin disorders, its salty air a tonic for chronic disorders from asthma to Crohn’s disease.

And now — while they didn’t find Cleopatra’s slipper or old rowboats from Roman times — the divers did come across a new series of underwater springs that feed the Dead Sea. Remarkably thriving at the mouth of these underwater springs are new varieties of microorganisms, some never before described by science.

“We went into deep springs up to 150 meters from shore. One wouldn’t expect to find artifacts there,” says Danny Ionescu, an Israeli doing research at the Max Planck Institute for Marine Microbiology in Bremen, Germany.

After several dives, he and his research partner, Christian Lott, took pictures and brought up evidence of carpets of bacteria in many of the places surrounding the springs. “This is not the typical algae that one finds in the Dead Sea,” he tells ISRAEL21c.

“We found that most of the biological biochemical pathways — all of these things that would occur in a normal environment — are also found in the Dead Sea. Nobody found photosynthetic microbial mats [before], big mats covering rocks.” He is quite sure that these microbes could not survive if they weren’t surrounded by a layer of fresh spring water. 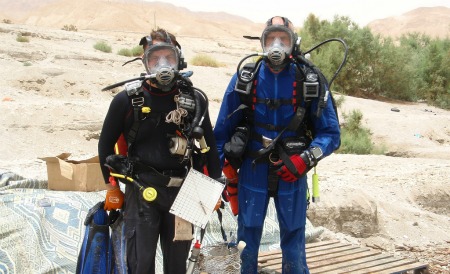 Danny Ionescu, left, and Christian Lott geared up for dive.

“The system is very diverse,” he adds. “Just how many species are there is difficult to say because what defines a species is under debate. We have results, which will be published soon.”

Biologists haven’t put too much emphasis on finding life in the Dead Sea, assuming that its hostile environment, which can kill swimmers if the water is ingested, didn’t harbor much.

“In general there is not a lot of work to do in the water of the Dead Sea, but now our work shows it is worth studying,” Ionescu reports. “On the bottom, which is made of a core, a thick layer of salt, one didn’t expect to find life.”

Diving deep into the waters of the Dead Sea required extreme diving equipment with an unusually large number of weights to counteract the effect of the super-buoyant surface. However, working in extremes is Ionescu’s forte, as he previously researched thermal springs in nearby Jordan.

The divers took samples of the underwater mats, which they are now studying with the aim of issuing more reports on the species and behavior of the microorganisms that seem to derive their energy source from sulfur.

Ionescu says that the novel scientific find could reveal additional environmental information on consequences should the proposed Red Sea-Dead Sea Canal be built. This controversial project, which would bring Red Sea water up to the Dead Sea via a series of canals, is one possible answer to the Dead Sea’s retreat.

On the northern tip, Jordan River water no longer runs to the Dead Sea as it once did, due to a prolonged drought. On the south shores of the inland lake, chemical industries from both Israel and Jordan have impacted the Dead Sea’s delicate balance as well. The result is a major net loss of water every year, causing deadly sinkholes and a threat to the thriving Dead Sea hotel industry.

But environmentalists have argued that bringing in Red Sea water would upset the delicate balance of salt and minerals that have made the Dead Sea a unique ecosystem.

Could this new research by Ionescu give more firepower to environmentalists seeking to protect the Dead Sea? He believes so.

“I agree that the Dead Sea is a national resource and environment unique worldwide and that should be preserved,” he says. “There should be a balance between exploiting its minerals for economic purposes and keeping the Dead Sea [from shrinking]. It’s an environment worth maintaining with a lot of potential for research and for other purposes.”