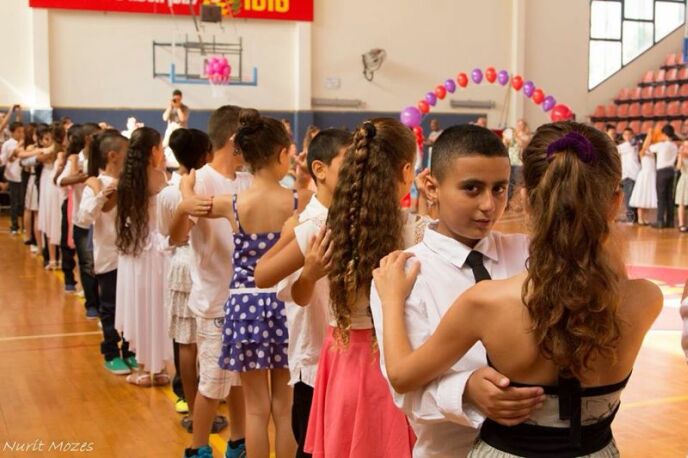 Bringing together 11-year-olds from opposite poles.

Whether it’s the cha-cha, tango, or a simple twirl around the school gym, Arab and Jewish fifth-graders in Israel are connecting through dance.

Nine years ago, Shahaf-Levi traipsed to New York City with the mission of bringing Dulaine, now retired, to Israel. She knocked on his studio door and was met with an exclamatory “Alain, wa’asalam!” an Arabic expression equivalent to “shalom” that’s often heard in Tel Aviv-Jaffa.

It turns out that Dulaine was born in Jaffa in British Mandatory Palestine, before Israel became a state, to a Catholic Palestinian mother and a Protestant father from Ireland. When he was four, they moved to Jordan, and later to England.

Dulaine speaks Arabic, French and English, but knows only a few words in Hebrew.

He does know of the incongruities of living in Israel firsthand and told Shahaf Levi he’d go there under one condition: “If you will find me Jewish and Arab children who can dance together.”

Shahaf-Levi, who worked for the government’s Culture Ministry and also as an adviser for the Israel Prize committee, let the idea percolate over the next several years. About four years ago, she arranged Dulaine’s visit to Israel. “I called him and told him that I’ve opened the window. Now it’s your turn to come over and open the door,” Shahaf-Levi tells ISRAEL21c. 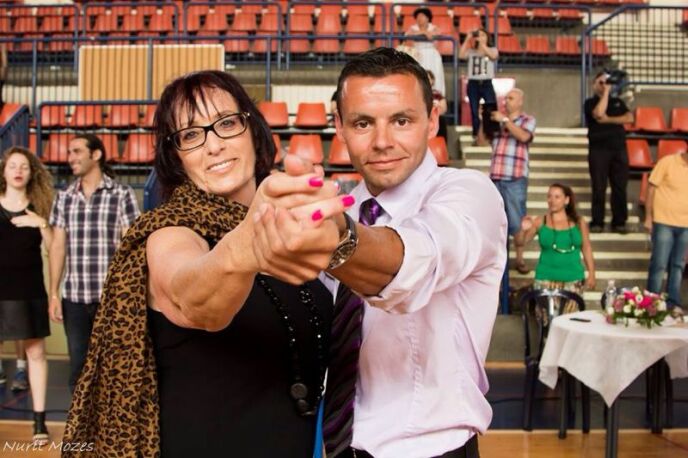 Thus, Dulaine was able to fulfill his lifelong dream of returning to the city of his birth and teaching Jewish and Palestinian Israeli children to dance together. Diane Nabatoff, who had produced the feature movie Take the Lead in which Antonio Banderas portrayed Dulaine, came along. She hired director Hilla Medalia and arranged for a documentary film crew to follow Dulaine. Dancing in Jaffa is now screening across the United States. Its Israel premiere happened in May when Dulaine came a second time.

The movie, which has won several international awards, shows kids once deeply suspicious of one another transforming into good friends and dance partners in hardscrabble Jaffa, where Jews, Muslims and Christians rarely interact beyond the grocery store.

The film documents Dulaine teaching rhumba, merengue and the tango to 11-year-olds, with a finale where Jews and Arab kids dance together in a competition. He uses techniques from his international program called Dancing Classrooms.

“Dancing in Jaffa came about when I mentioned the idea of fulfilling my lifelong dream of returning to Jaffa, where I was born, to teach my Dancing Classrooms program to Jewish and Palestinian Israeli children. To bring them together face-to-face to dance with each other,” says Dulaine.

Shahaf-Levi found five schools in Jaffa that were willing to work with Dulaine: the Arab schools Al Achouweh/Achva and Ajjayal; two Jewish schools, The Open Democratic School and Hashmonaeem; and one mixed school of Jews, Muslims and Christians called Weizmann.

In certain instances, a letter had to be signed by the Muslim kids’ parents that it would be okay, on religious grounds, for them to dance ballroom with the opposite sex. The letter was written in English by Dulaine and translated into Arabic and Hebrew.

“We have two sheiks who signed on their sons. Everybody was dancing.”

Dulaine admits he almost gave up part way through when the kids weren’t cooperating. But he trusts in the power of dance. “I believe just in believing and really see that when you touch someone with respect, something really does change.”

He has stayed in touch with some of the participants. “I saw four of the children — Noor, Alaa and Lois in Paris, and in New York (Lois’s brother David came as well) a few months ago for the premieres there. They were now grown up but all very, very friendly with each other,” he reports. 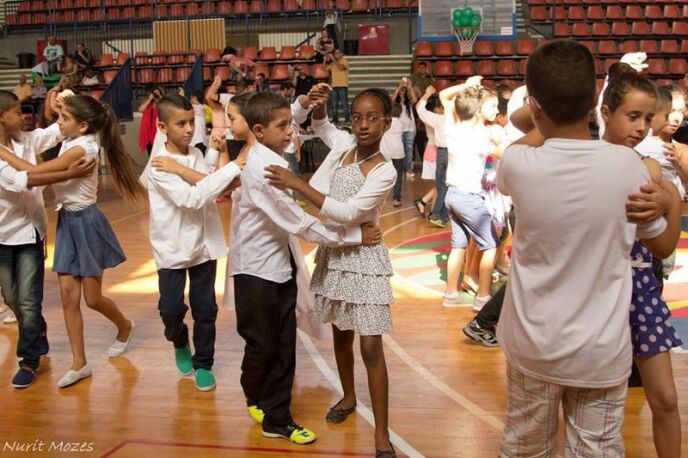 Shahaf-Levi now is the executive director of Dancing Classrooms in Israel, actively building bridges by directing a countrywide program that has trained more than 2,000 kids in the art of ballroom dance in the past four years.

Three-month sessions twice a week take place in cities including Haifa, Tel Aviv, Holon, Carmiel and Herzliya. A new sponsor from the United States will make it easy to expand and develop the program, she notes.

There are four dance instructors who help run the sessions, which have been an overwhelming hit among kids deemed “special needs.” In some cases, lives have been transformed, says Shahaf Levi.

“It’s about confidence building,” she sums up. “And looking each other in the eye.”

For more about Dancing Classrooms in Israel, click here