Buckley, Miller, Giovinazzo and Togo at the Western Wall. Photo by Michael Kovac/WireImage

He’d learned in Hebrew School about Judaism’s most sacred existing site, but it didn’t fully resonate until he was standing there with fellow CSI cast members during an eight-day trip arranged through Israel’s Foreign Ministry.

“I’ve always heard about Israel and I’ve always wanted to go, so when the opportunity came up I couldn’t turn it down,” Togo tells ISRAEL21c during a tour of the Israel Museum in Jerusalem.

He says he was particularly struck by the international nature of the modern state with its rich, open culture based on democracy.

“The fact that it sprung out of the desert like an oasis — you’re constantly reminded of what an accomplishment that is in a very short period of time,” says Togo. “People from many different places brought the best aspects of where they’re from in the world to create as close to a utopia as I’ve ever seen.”

Accompanied by entertainment industry executive Traci Szymanski, the actors Segwayed in Tel Aviv, floated in the Dead Sea, marveled at the ancient and new harbor at Caesarea, sampled fine wine at Binyamina and explored Masada.

‘Much more fun than I expected it to be’

“The goal for any celebrity trip to Israel is for them to see the country for themselves so they can stop relying on stereotypes, media misperceptions and rumors,” Szymanski tells ISRAEL21c. A 2003 Birthright participant who’s been back as a leader many times since, Szymanski partnered with Hollywood producer and Israel advocate Noa Tishby to create trips for actors through HollywoodExecs4Israel. “Celebrities have the power to spread the word without an aggressive push. They see for themselves that Israel is safe, beautiful, rich in culture and art, history and spirituality, sports … it has everything, including beautiful weather.”

Miller relates that “the outstanding climate makes me feel like I’m home in Los Angeles.”

As a Christian, he says he “had very high hopes for Israel and it’s lived up to and surpassed what I had in mind,” despite hurting his knee while horseback riding in the Galilee. “I’ve had such an eye-opening experience — a really nice glimpse into the culture and lives of Israelis and the Jewish people. We’ve been exposed to a lot of things culturally I’d never seen before, and it was much more fun than I expected it to be.”

Miller is tweeting his fans about “the wonderful food, and how close-knit and small everything is. Strangely, I’ve run into five or six people I know from home. It’s a small world here, but a very hospitable small world.”

For Buckley, an Irish Catholic familiar with the Bible, “the whole trip is like reading a storybook and then getting to participate in the storybook and have it come alive.”

He brought along the ashes of his father, who passed away in December without fulfilling a lifelong wish to visit Israel. “I’ve been scattering them in the [Sea of] Galilee, by the Wailing Wall … it’s a really emotional experience,” Buckley tells ISRAEL21c.

On a lighter note, he confides that he feels healthier from eating Israeli cuisine. “There are so many courses here, but it’s so healthy. You eat cucumbers and tomatoes for breakfast, and the hummus is unbelievable — everyplace I go, I think it’s the best I’ve ever had in my life. Traveling through Israel has been a life-changing experience for me, from the people to the food to the beautiful sea.”

More celebs on the way

One of their many stops was Argo Medical Technologies in Yokneam Illit, maker of the ReWalk exoskeleton for paraplegics. 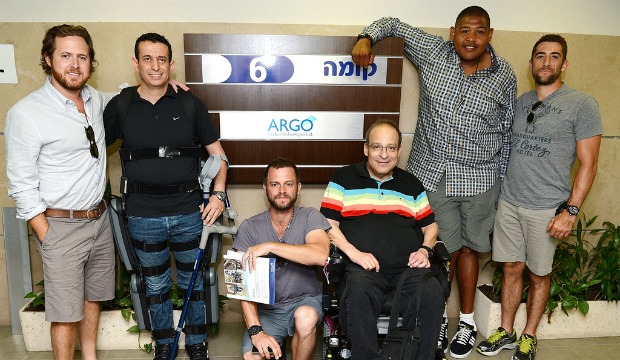 Buckley, Giovinazzo, Miller and Togo getting an up-close look at the ARGO ReWalk with test pilot Radi Kaiuf (wearing the exoskeleton) and founder Dr. Amit Goffer. Photo by Michael Kovac/WireImage

“That was the most amazing thing I’ve ever seen,” says Togo. “Israel is the finest combination of the ancient beginning of civilization and the most progressive, cutting-edge community of right now.”

Over the last year, Israel’s Tourism Ministry has stepped up efforts to host celebrities and opinion-formers. Perhaps that has something to do with the expected all-time high 3.8 million tourists coming to Israel by year’s end.

“Millions of people follow the activities of these leaders on the various social media platforms and via traditional media,” said Tourism Minister Stas Misezhnikov.

“The ministry will continue these international marketing activities across the year, while highlighting the tourism experience and the varied tourism product that Israel has to offer.”

Szymanski and Tishby are now planning a trip for Dancing with the Stars celebs. “Every day, every meeting, every encounter is an opportunity to change someone’s perspective about Israel and the Jewish people,” Szymanski says. “If we work to change the misconceptions about Israel, it will decrease prejudice, hate and ultimately violence.”