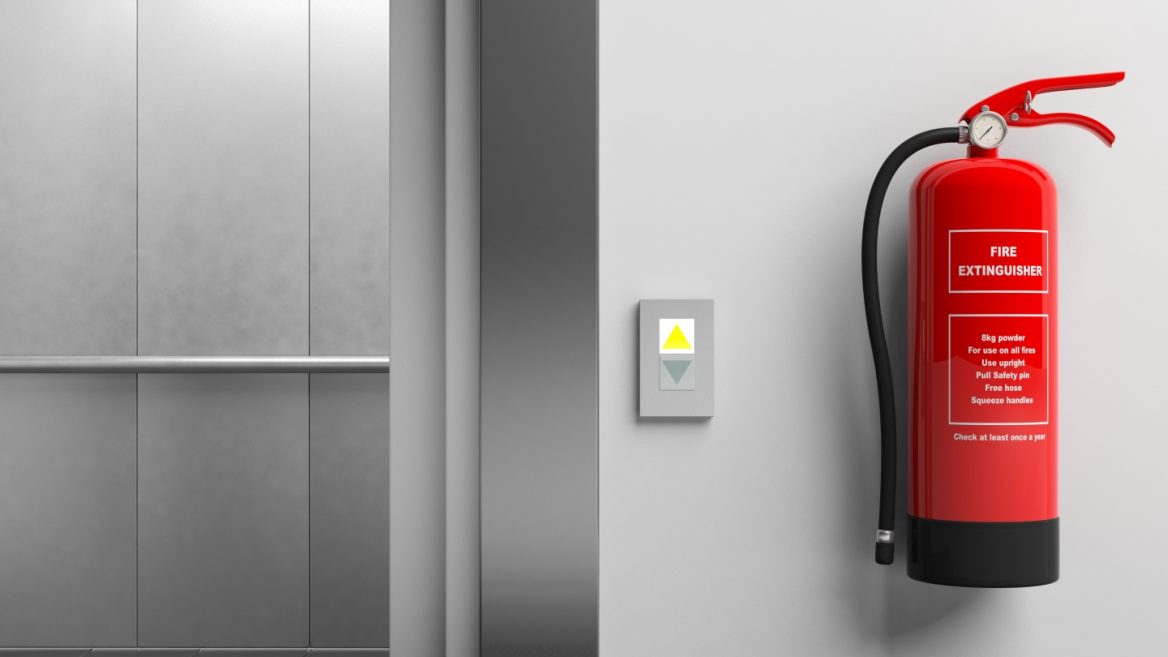 With Salamandra Zone, elevators may become the safest escape route from a high-rise fire. Image via Shutterstock.com

When there’s a fire in a high-rise building, safety rules dictate that you don’t take the elevator. You head for the stairs instead. But what if using the elevator could actually be the fastest – and safest – way to evacuate a building on fire?

Salamandra Zone is an Israeli startup that wants to make it possible for people trapped in a burning building to flee using the lift. Today, elevators automatically shut off if they detect a fire because the poisonous gases released from the fire can quickly overwhelm the elevator cab.

Indeed, some 95 percent of deaths from building fires are not caused by getting caught in the flames but from inhaling carbon-based gases and other byproducts of the fire.

Those same gases also fill the stairwell, making it just as toxic as the elevator cab and even more dangerous when a panicked office building’s workers crowd into a congested space all at once.

Salamandra Zone’s solution: Don’t shut down the elevator. Rather, turn the cab into a traveling “safe room” that can facilitate rescue operations.

Salamandra Zone’s main product under development, B-Air, is a small box placed on top of an elevator cab. This innovation, based on years of chemical and engineering research, has two functions.

First, it converts toxic gases into breathable air in nanoseconds. Second, it adds a high-powered fan to the roof of the cab, which pushes cooled air into the elevator and prevents smoke from entering. It works even when the elevator doors are open. B-Air has a backup battery providing at least three hours of operation. 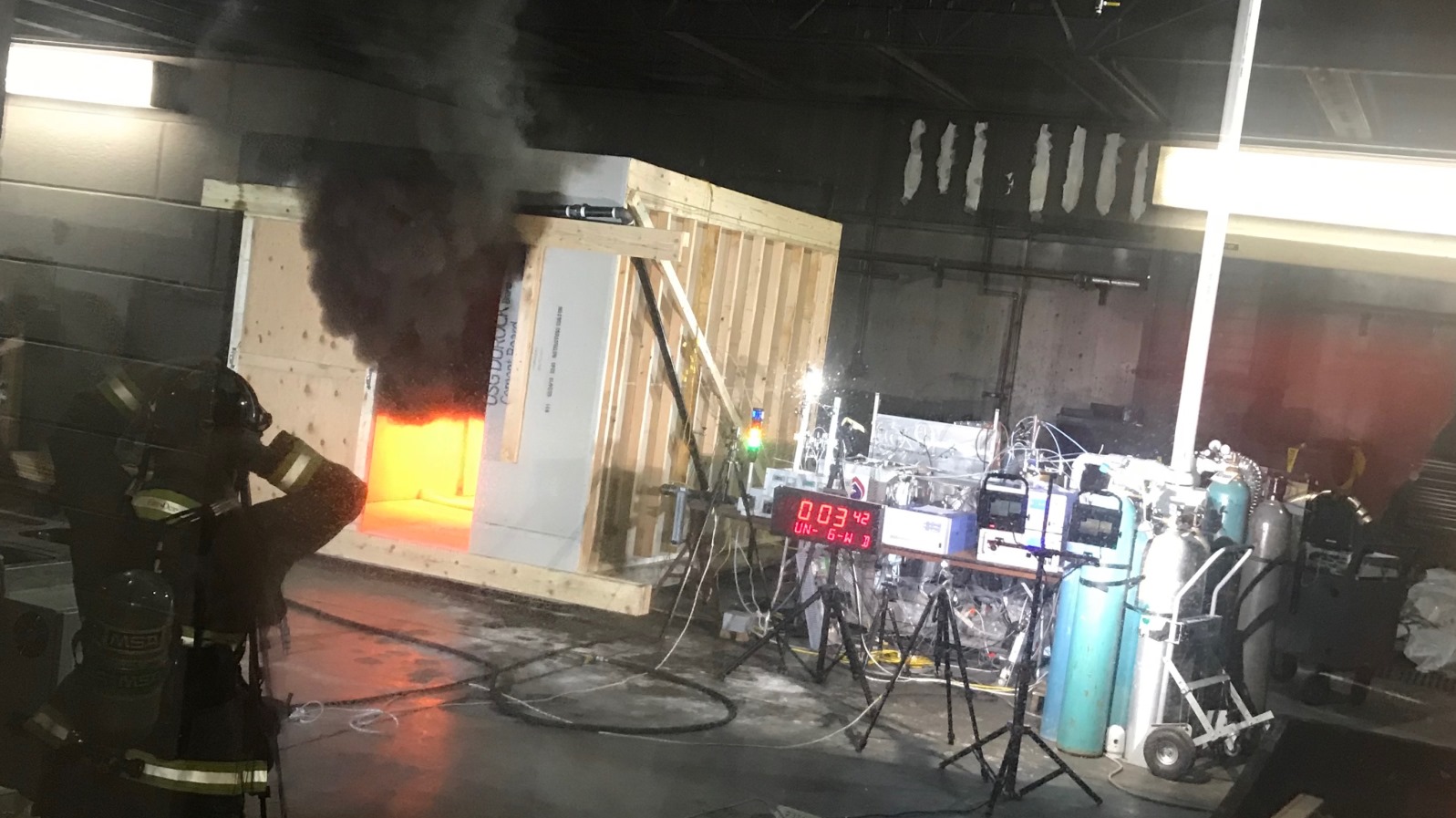 A test of Salamandra Zone’s B-Air for elevators. Photo: courtesy

“High-rise buildings are very vulnerable,” Salamandra Zone COO Gil Tomer tells ISRAEL21c. “Staying in place and waiting for the firefighters to rescue you is not an option. The highest ladders in the world can reach only to the 12th floor.”

Modern high-rises soar dozens of floors, and sometimes over 100 — the Burj Khalifa in Dubai has 160 floors and 57 elevators.

And if you still need proof of how deadly high-rise fires can be, you only need to look back to June 2017, when a fire broke out in the 24-story Grenfell Tower block in London, killing 72 people. Fire services told residents of the building to stay put and wait to be rescued. The advice was disastrous.

B-Air’s sophisticated sensors can detect the exact concentrations of the noxious gases outside. The unit contains a mix of its own counter chemicals intended to react instantly with the sensed gases and convert them into breathable air. CO2, for example, is split into its molecular components until only O2 is left.

As it converts the gases, B-Air sucks the toxic air from the elevator shaft into the cab at 72 kilometers per hour, creating a high-pressure zone that keeps any unfiltered gases out. It can easily be retrofitted into an existing elevator.

What about the fear that fire in an elevator shaft will snap the elevator cables? That kind of construction is long gone. “Decades ago, elevator shafts were built from different materials, including wood,” Tomer points out. “Today, the shaft is one of the most protected areas in a building. It’s made of concrete and never catches on fire.” 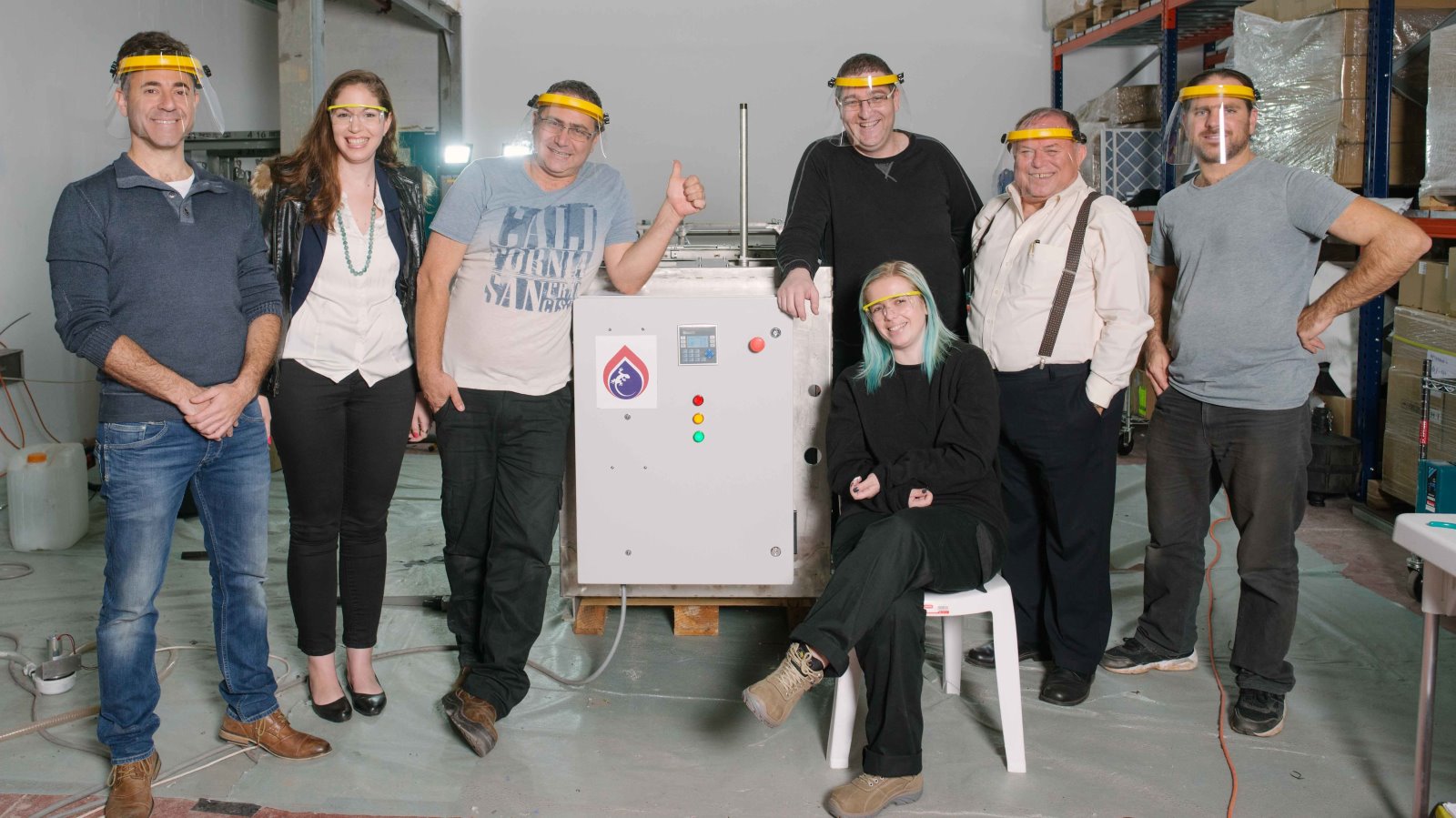 For a building to change protocols and allow its elevators to continue operating during a fire, the B-Air system must work flawlessly. That was the main reason the entire seven-person staff of Salamandra Zone spent three weeks in the offices of Underwriter’s Laboratory in the United States earlier this year to perform testing.Tomer estimates it will take a year until B-Air will be released to early adopters such as premium buildings, hospitals and retirements homes.

Salamandra Zone’s second product, C-Air, is aimed at industrial plants that might have a gas leak or simply need a more efficient, less expensive way to clean up polluted output from their facilities.

Many industrial plants combine all their sources of emissions into a single pipe and then run it through a “scrubber” before it’s released into the atmosphere, Tomer says. “But in the best cases, they only have 40 percent efficiency.”

Installing C-Air at the end of the pipe – instead or in addition to the scrubber – can clean the gas “with 99.8 percent efficiency,” Tomer claims. Moreover, “the infrastructure is cheaper and it needs less chemistry.” Tomer expects C-Air to be released sometime next year, just in time for European factories to be in compliance with a change in the way the European Union tracks pollution – from measuring concentration to measuring weight.

“They only have two years to stop these emissions,” Tomer says. “It’s like a sword hanging over their necks.”

Once the system gains traction in Europe, the United States and China (with its famously polluted cities and a government mandate to clean them up) will be next. Salamandra also has letters of intent to install C-Air in three industrial plants in Israel. 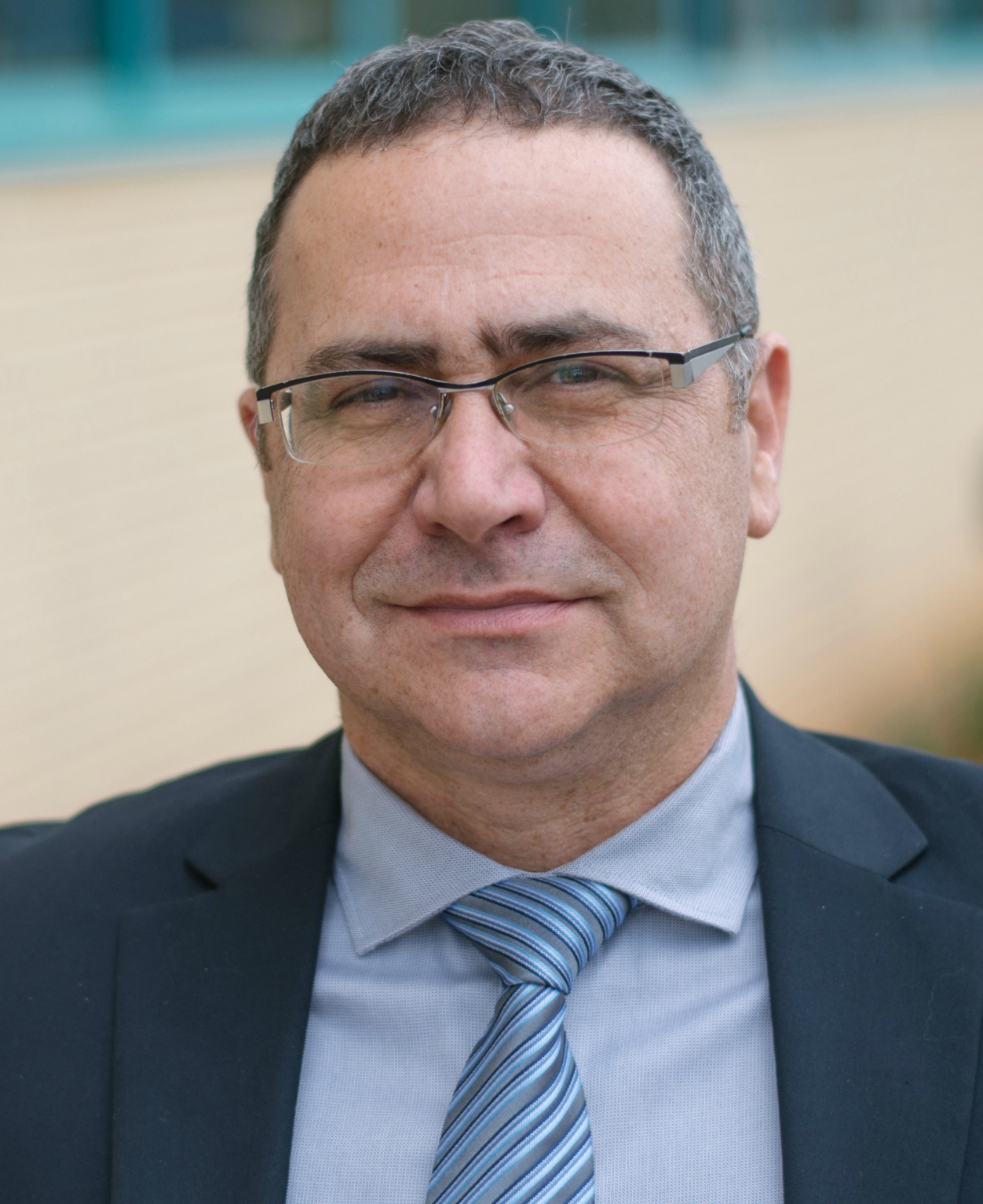 Salamandra Zone was founded in 2014 by Marat Maayan following his 27-year career in the Israel Defense Forces. One of his last military roles was to map and identify risks to buildings at sensitive facilities. One risk he found: evacuation from fire.

Maayan hooked up with Hebrew University Casali Institute of Applied Chemistry Prof. Yoel Sasson, who had received a provisional patent on converting carbon dioxide into breathable air. Salamandra Zone was formed as a private company that collaborates and has shared patents with the university. Sasson serves as the company’s senior scientific adviser.

Salamandra Zone’s headquarters are in Yehud, with R&D at the Hebrew University in Jerusalem. The company has raised $2.5 million from the Israel Innovation Authority, private investors and founder Maayan.

The company’s name is Hebrew for “salamander,” an animal than can breathe air but also lives in the water, Tomer says. “Ancient tribes in South America called salamanders ‘divine creatures’ because they could survive forest fires while other animals ran away or died. The salamanders would dive into the water and only surface after the fire had gone.”

Could Salamandra Zone have helped save more people during the 9/11 attack in New York City? Tomer says absolutely yes, noting that at first people were able to evacuate by elevator but eventually the elevators in both towers shut down before more people could escape. 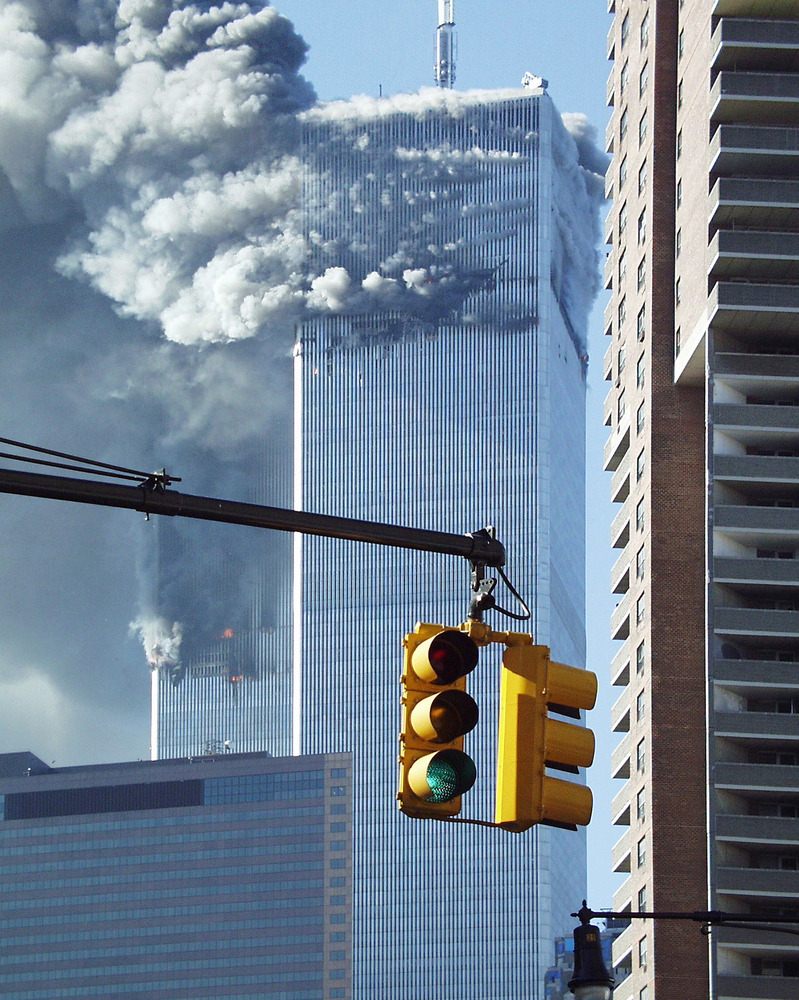 Smoke billows from the Twin Towers after two airplanes hit the buildings on September 11, 2001, in New York. Photo via Shutterstock

Based on models run by Salamandra, the Israeli technology would have been a lifesaver. “I don’t want to say a specific number, but based on our calculations, it could have been in the hundreds.”