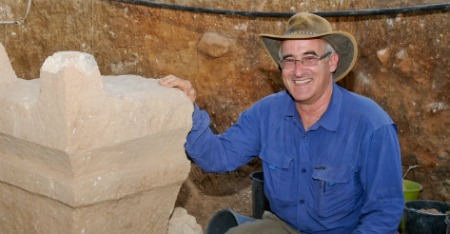 Maeir with an unusual Philistine altar found at Tel es-Safi.

If his parents hadn’t moved from New York to Israel in 1969, noted Israeli archeologist Aren Maeir would more likely be holding a stethoscope than a shovel.

“In Jewish suburbia, 90-odd percent of people are doctors, lawyers or accountants,” muses the Bar-Ilan University professor of biblical and ancient Near Eastern archaeology. “The range of out-of-the-box professions is rather small, so the chances of my becoming an archeologist would have been smaller.”

Instead, arriving in Jerusalem at the age of 11, Maeir developed a robust Israeli zest for the great outdoors. His family visited archeological sites, including exciting new excavations then taking place in the vicinity of Jerusalem’s Western Wall, whetting his appetite for exploring history hidden among the rocks.

The lead archeologist on the Tel es-Safi/Gath Archaeological Project, which goes into its 16th excavation season this summer, Maeir previously directed excavations and surveys in Jerusalem (the Western Wall Tunnels, Mamilla, Kikar Safra, Malha), the Beit She’an Valley and Tel Yavneh. More than 100 scholarly and popular articles on archeology, as well as several books, carry his byline. 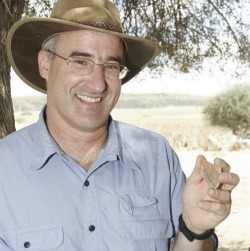 Digging up treasures at Tel es-Safi/Gath.

Tel es-Safi, identified as Canaanite/Philistine Gath — home of the biblical giant Goliath — was settled continuously from late prehistoric through modern times. Maeir’s excavations there since 1996 have turned up the earliest known siege system in the world, the earliest deciphered Philistine inscription and well-preserved evidence of cultures, peoples and historical events spanning six millennia.

“I was sure I’d be there 10 years, but the site is so large and there is still so much we don’t understand about the Philistines and Canaanites,” Maeir tells ISRAEL21c. “There are constant surprises and questions, so I guess I’ll stay till I get too old to go up the side of the hill.” Or until his grant money dries up.

Maeir’s blog gets hundreds of hits every day. It seems people everywhere are curious about the secrets revealed through archeology – particularly in the Holy Land.

“Israel is a region rich in archeological sites, and for many years every Israeli considered himself an amateur archeologist as part of the Zionist ethos,” Maeir says. “We were looking for our underpinnings here. As much as there have been claims that archeology has been misused in the Zionist narrative, it’s a mistake not to use archeological finds to search for all cultural heritages, in an inclusive way.”

The 100 people per week who come to volunteer at Tel es-Safi include novices, more experienced students and experts in various related fields. Maeir calls it a “multi- and interdisciplinary effort. Last summer we had volunteers from Canada, the US, England, France, Spain, Italy, Greece, South Africa, Australia, New Zealand and Korea. It’s a very multinational, interreligious experience.”

Part of the attraction is the possibility of unearthing a significant artifact. “Sometimes the greenest volunteer excavates the greatest find. It’s a matter of who stuck the trowel in the dirt,” says Maeir.

But even those who don’t hit pay dirt enjoy themselves despite the heat and the long hours of physical labor. “Since we started, not a single person ever said he or she didn’t have a good time.”

That’s a foremost priority for the affable archeologist.

“There’s no reason to do archeology if you’re not having a good time,” he says. “It’s hard out there in the sun, getting up early in the summer and running an excavation with 100 people — much harder than anything I ever did in the army. So you have to have a lot of fun. The constant feeling of turning over a shovel of dirt and knowing there could be something new and unexpected always tickles you, and the special finds are exhilarating.”

Whereas most digs continue for six to eight weeks, Maeir limits his annual excavations to one month.

“I run my excavations differently than anything I’ve been on,” he says. “I try to form a team where everybody is friendly and non-competitive. After four weeks I’m not having fun anymore, and the team members start getting on each other’s nerves.”

The shorter period also allows more time to write up the season’s finds. And it’s long enough for summer romances among the ruins. Maeir has gotten wedding invitations from former volunteers who met at Tel es-Safi, although he tries to create a working environment for the students that is more respectful than racy.

Maeir earned his bachelor’s degree in archaeology and Jewish history, and a PhD in archaeology at the Hebrew University, after serving in a special forces military unit, earning the rank of captain. He’s been at Bar-Ilan since 1992.

In his spare time, Maeir likes to stay fit in body and mind, constantly reading four or five books simultaneously — in both Hebrew and English.

His wife, Canadian-born Adina Hartman Maeir, teaches occupational therapy at the Hebrew University of Jerusalem, a short trip away from the family homestead in the capital city’s Baka neighborhood.

The Maeirs spent a sabbatical year in Boston about a decade ago and will probably go to California for half of 2013. Maeir visits the United States at least once a year, combining archeological conferences with lecture tours “to just about any type of crowd.” He has had audiences as far away as China.

But he has no plans to move anywhere else permanently. “I like it here,” he says simply.

UNCOVER ISRAEL - Get the ISRAEL21c
Weekly Edition free by email
Sign Up Now!
Bring Israel's story to life.
Millions of people around the world rely on us to gain a deeper understanding of Israel. We are the trusted source for original content you won't find anywhere else.
You can make a difference. Donate today to support journalism that brings Israel’s story alive.
SUPPORT ISRAEL21c
Read more on:   People, Archeology