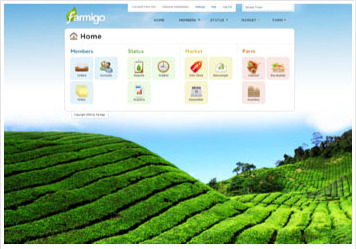 More and more Israelis are joining the worldwide move to buying their fresh produce from small, organic farms. But because they’re farmers, and not necessarily businessmen, most of these family-run businesses aren’t being run on the most optimal level.

Consumers who get the fresh produce delivered to their homes often don’t have a say in what kind of fruit and vegetables they’ll receive – will it be 10 radishes and two apples, or top heavy with red peppers? And despite the clear health benefits, the discrepancy in prices between store-bought and organic produce is too much for many consumers.

That’s where startup Farmigo and its CEO Benzi Ronen comes in Farmigo, aiming to improve day-to-day operations for small organic farms, making them more effective and hopefully profitable as well.

Ronen and his team interviewed farmers at 124 CSA (Community-Supported Agriculture) farms and discovered that their heads were in the ground – literally. They were focusing so much on the food they were growing, that the business side was being neglected.

Farmers complained that they often spent up to 30 hours a week on emails and calls dealing with member payment and delivery questions – time they would prefer to spend tending their gardens.

Most farms don’t have their own online store and it’s rare that they’re set up to take credit card payments. But when Ronen asked them questions like: “Did everyone pay you?” or “Did any checks bounce?” they would scratch their heads.

A shorter lifespan for the coming generation

Ronen says that the potential for organic farms is fast approaching a tipping point, and none too soon. With diabetes and obesity on the rise, the “generation coming of age now will be the first to have a shorter lifespan than their parents,” Ronen warns.

How did we get into this situation? According to Ronen, after World War II, there was a push to reduce the cost of food (families were paying up to 16 percent of their income for groceries at the time) and increase accessibility.

Those economies of scale led to huge ‘mono-crop’ farms, each focusing on only one to two crops. Small farms growing a more diverse selection were nearly driven out of business entirely until recent years when they’ve started to make a comeback.

Selling their produce to the big conglomerates just doesn’t make economic sense for organic farms that would earn only 20 cents on every dollar in such an arrangement. Going directly to the consumer is the only way to compete.

A Fortune 500 approach to organic farming

Ronen and his partner Yossi Pik met at SAP where they worked on software applications for Fortune 500 companies. Their vision for Farmigo is to build the same type of customer-relationship management and e-commerce systems for the CSA industry.

The Farmigo founders talked to hundreds of farmers and their customers to determine what would satisfy everyone and make the CSAs sustainable. Their research led to a system that includes an ordering engine that tracks and verifies payment in a variety of formats, including credit card validation; a delivery and reporting tool that prints box labels, route maps and site pick-up locations; a harvest module that helps farmers select what goes into each weekly produce box; and an online store and collaboration tool so that separate farms can work together to offer a wider variety of produce to their customers.

Farmigo charges nothing up front and no set-up fees. Instead it takes two percent of sales and even offers an initial 60-day money back guarantee. The entire service is hosted “in the cloud” (meaning it’s all web-based with no software to install locally) and is built using Google’s application environment.

Racing to do business before harvest time

It all began in 2008 and the company is still small with four employees in two locations – marketing and sales are located in the San Francisco Bay Area, R&D is in Israel. Ronen won’t divulge how much he’s raised, but says it’s from angels rather than VCs and is enough to keep the company going through until 2011 “as long as we stay lean.”

He’s optimistic about the growth of the organic farm market. In addition to families and individuals, small farms are increasingly selling directly to restaurants and schools. It’s important that they continue to supply their fresh produce to children, for many schools have moved to providing only food that can be “held in your hand” with no cutlery needed, which Ronen points out is too often unhealthy ‘fast food.’

Moving beyond produce, Ronen says that Farmigo could be applied to meat as well, although that would require a much more complex model. “You don’t know the weight until it gets to the customer,” he says. “And you also have to sell more parts of the cow to make it economically worthwhile.” Brains in the delivery box, perhaps? Wine and spices can also benefit from the Farmigo system, according to Ronen.

The company is first targeting the American market and Ronen admits that getting the interface to work in Hebrew is challenging. To date Farmigo has two new customers coming onboard every week and the race is on to June, which is peak harvest time. “Farmers won’t talk to us for three months after that,” Ronen says.