Ctera’s CloudPlug fits in the palm of your hand and turns a USB drive connected to your main computer into a full-fledged, Internet-connected, backup solution. 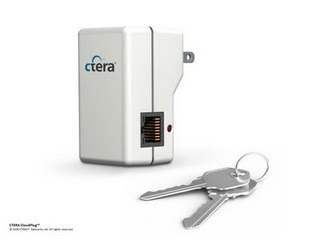 It may look tiny, but Ctera’s CloudPlug can back up your files directly to the Internet, without a lengthy back-up process.

When my 300 GB hard drive died suddenly a few months ago, thousands of photos, videos, music, work and personal files were all lost in the instantaneous demise of what I had trusted was a bullet proof, maximum storage data facility. My panic was averted when I recalled that I hadn’t yet deleted those files from my desktop computer. But a fire had been lit.

My newly-ignited search led me to Israeli startup Ctera, a hybrid between local in-office storage and the Internet that has a new take on backup. Petah Tikva-based Ctera sells the CloudPlug, a tiny little device that fits in the palm of your hand and turns any USB drive you have connected to your main computer into a full-fledged Internet-connected backup solution. And there’s no software to install.

Gone was my reliance on local storage. Bring on the power of the cloud – that is, the ability to back up files directly to the Internet rather than to a drive sitting somewhere in my office.

Storing and synchronizing files online has become big business – with good reason. It’s more secure and your files are accessible from any computer. Dozens of services have appeared in the last few years – Mozy, Blackbaze, Zumo and SugarSync are among the most well-known.

The problem with all these services, however, is that they’re slow. It can take you literally weeks to back up all your data and if you leave the software running in the background – as you should if you want to make sure nothing gets lost in case of a crash – your computer can slow to a crawl.

With the CloudPlug, your files are first backed up to the USB drive and then they’re pushed to the Internet. This two-step process means that your computer doesn’t slow down while the backup is going on. It also allows files that were previously on a non-Internet connected drive to be shared across your home or office network.

To accomplish the same trick without the CloudPlug, you’d have to buy a more expensive NAS (Network Attached Storage) box, or go so far as to install a pricey and technically complex file server.

For those with bigger budgets, Ctera (the name stands for “cloud” plus “terra” – Latin for Earth) also sells its own NAS with the CloudPlug functionality built-in. And the company makes its core CloudPlug technology available to third party hard drive manufacturers.

Marketing VP Rani Osnat tells ISRAEL21c that the fact that there’s no software to install makes the CloudPlug especially appealing to the small office, adding that it’s a plug and play solution meant to reduce reliance on specialized IT staff.

Osnat says that the CloudPlug is especially useful for tele-workers. And it’s certainly easier to deploy than DVD or tape backup (that’s so 1999). The CloudPlug is designed to support up to five users, with the larger NAS supporting up to 20.

Not aimed at the individual consumer

Other CloudPlug features include the ability to access previous versions of your files so that you can roll back to exactly the way your drive looked before disaster struck. All data is encrypted with a user-specific secret key before it’s sent to the cloud.

So by now you’re probably thinking: I want one of those! Not so fast. The CloudPlug is not aimed at consumers. Rather, it’s meant to be offered to you from your ISP (Internet Service Provider), which makes good business sense.

ISPs are watching their bandwidth getting sucked up by the expanding cloud storage business, Osnat explains, without being able to generate any revenue of their own from the trend.

Ctera hopes that ISPs will buy the CloudPlug and then offer it to their customers along with their own cloud backup – for a fee, of course. The amount they charge is up to the ISP, so it will vary from service to service.

Since the CloudPlug is so small – about the size of a cell phone charger – the ISP could even pop it in the mail to a customer rather than send a technician.

Ctera recently announced that its first partner, hosting and storage company Rackspace, will be promoting the CloudPlug through its online marketing programs.

However, Ctera hasn’t been entirely faithful to its business model, since the company also announced that it would sell the CloudPlug to what Osnat dubs the “prosumer” market – “those customers who are not necessarily on the radar for the ISP channel partners.”

The CloudPlug will sell for $199 including 10 GB backup for the first year, and after that, prices will range from $10-$100/month depending on the amount of online storage.

Ctera was founded in May 2008 by Liran Eshel and Zohar Kaufman, two entrepreneurs from Sofaware, a company owned by Check Point that built security appliances for small businesses. The company is backed by an investment from the respected VC firm Benchmark Capital.

Ctera formally launched earlier this year at the Consumer Electronics Show in Las Vegas, where it received a “Judge’s Choice” award at the Under the Radar conference.

The Ctera software supports Windows and there’s a Mac version on the way. How about the iPhone? Can we expect a version supporting Apple’s uber-popular device and other smart phones?

Probably not, Osnat tells ISRAEL21c, because Ctera’s solution is hardware. Unless you like the idea of a key-sized dongle hanging from the phone, “there’s not enough value add there to compete,” he explains. But in the office… well, only the cloud knows.