The long-term, cumulative effect of these storms is to transfer heat away from the Tropics, which has, in turn, already caused the polar regions to warm up by as much as 30 degrees centigrade.

A new study, published by the researchers in the peer-reviewed journal Nature Climate Change, describes the outlook globally as “bleak”.

The team, based at Weizmann Institute of Science’s Earth and Planetary Sciences Department analyzed huge volumes of data from 30 climate model simulations around the world, together with current storm observations.

They concluded that the Earth’s climate is changing faster than anyone expected and that storms in the southern hemisphere are already at levels of intensity not previously expected until the year 2080.

The storms play a critical role in the transfer of heat, moisture and momentum within the atmosphere, and have a significant impact on the climate. 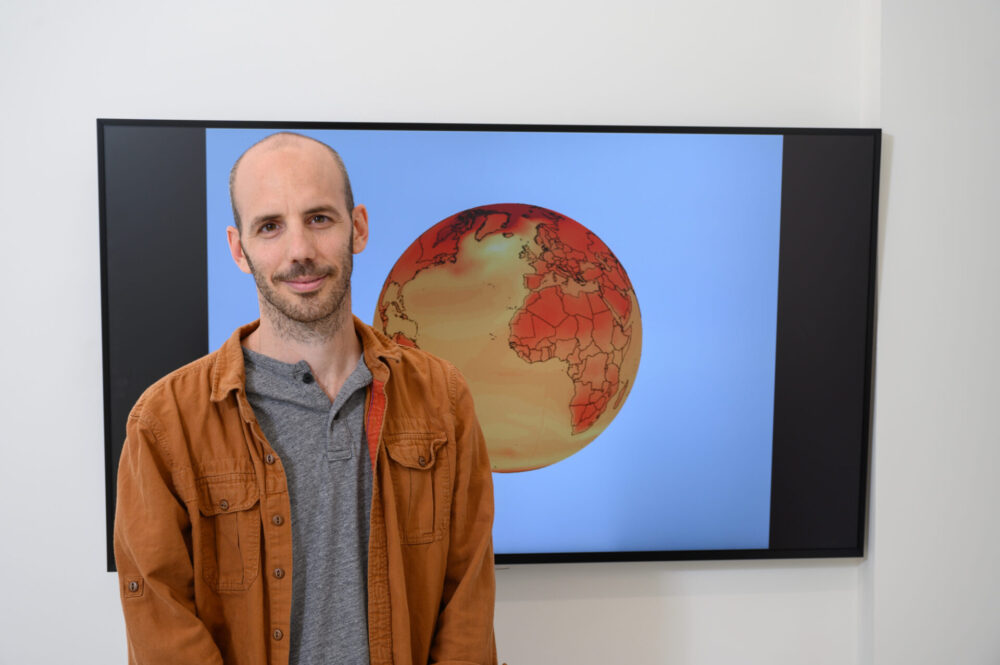 Dr. Rei Chemke with an illustration of future changes to the Earth’s surface. Photo courtesy of the Weizmann Institute of Science

“A winter storm is a weather phenomenon that lasts only a few days. Individually, each storm doesn’t carry much climatic weight,” said Dr. Rei Chemke, who led the research team.

“However, the long-term effect of winter storms becomes evident when assessing cumulative data collected over long periods of time.”

“One example of this is the role the storms play in regulating the temperature at the Earth’s poles. Winter storms are responsible for the majority of the heat transport away from tropical regions toward the poles.

His team, working with Dr. Yi Ming, of Princeton University and Dr. Janni Yuval of MIT, limited its study to the Southern Hemisphere, but believe it’s a similar picture in the Northern Hemisphere, though not as pronounced.

Their findings, together with those of other leading research institutes, will be incorporated into an assessment report of the UN’s Intergovernmental Panel on Climate Change (IPCC), which will help develop coping strategies.

The researchers conclude that climate projections for the coming decades are graver than previous assessments. In particular, they suggest that human activity might have a greater impact on the southern hemisphere than previously thought.

They call for rapid and decisive intervention to halt the climate damage there, and to correct a bias in climate models to provide more accurate climate projections.

“The models are doing a very good job at forecasting nearly all the parameters,” Chemke says, such as changes in temperature, precipitation, sea ice, and summer storm patterns, but he warns they need to take account of the winter storms that his team has identified as a critical factor.

Incorporating their findings should allow experts to more accurately estimate the extent of the damage climate change is causing.