An Israeli medical consortium is at the forefront of efforts to halt the progression of the HIV-AIDS epidemic in Africa.

Photo by Amnon Gutman.
Clients read about AIDS prevention in comic-book style while undergoing the 18-minute procedure under local anesthesia.

Experts from Israel recently assisted in setting up a circumcision clinic in the AIDS-stricken province of KwaZulu-Natal, South Africa, called Asiphile (“Let’s Be Healthy” in isiZulu). Teams will continue to train medical personnel from several area hospitals at Asiphile, which is run by St. Mary’s Hospital of Mariannhill.

Since August 2010, nearly 2,000 men have come to Asiphile to be circumcised. The men are followers of Zulu King Goodwill Zwelithini, who earlier endorsed a World Health Organization (WHO) recommendation on widespread medical male circumcision (MMC) as a means of slashing the risk of contracting the HIV virus by up to 65 percent. The protective effect even appears to strengthen over time.

Jewish baby boys are normally circumcised at eight days old as a sign of their acceptance into the biblical covenant of Abraham. If the surgery must be performed after the age of six months, it must be done by a physician rather than a lay ritual circumciser. So after circumcising some 100,000 adult males, nobody has more expertise in this area than do Israeli doctors.

Schenker tells ISRAEL21c that in 2006, WHO, UNAIDS and UNICEF requested Israeli input into how to introduce MMC to the package of HIV prevention methods in African nations. OAC was established a year later to provide MMC training and service delivery at community clinics.

“The surprise was that these UN agencies did not show the bias we usually see against Israel in the UN,” observes Schenker, a former WHO staffer, global health consultant and senior HIV prevention specialist. “They were ready to acknowledge that Israelis have something they need that no one else has — the ability to get the job done effectively and swiftly, with very minimal adverse events.”

After a pilot project in Swaziland, which has the world’s highest HIV prevalence, OAC branched out to Lesotho, Uganda, Zambia, Ethiopia and South Africa.

Last summer, an Israeli medical delegation traveled to KwaZulu Natal Province to set up Asiphile, which receives US government funding through the President’s Emergency Plan for AIDS Relief (PEPFAR) and US Centers for Disease Control and Prevention mechanisms. The eventual goal is to provide MMC to 2.5 million men within five years.

HIV and AIDS are epidemic in South Africa, with approximately 10.5% of the nation’s 50 million people carrying the virus. An estimated 17% of South Africans aged 15 to 49 years are HIV-positive, with some 410,000 new infections each year. The adult HIV rate is highest (at least 28%) in the KwaZulu-Natal province.

OAC assisted St. Mary’s in the design and set-up of the Asiphile Clinic in Pinetown, on the outskirts of Durban as a model for community-level MMC. The Israelis already trained public health teams from six other hospitals in the region and will offer further training at Asiphile.

“During the first two weeks of August 2010, a team from Operation Abraham trained two MMC teams for St. Mary’s Hospital,” says the hospital’s medical director and CEO, Dr. Douglas Ross. “Subsequent to this, [the organization] has assisted Asiphile Clinic in its quality assurance program and the development of an operational manual.”

Because removal of the foreskin is not enough to prevent HIV infection, OAC introduced group and one-on-one counseling, which even continues on the operating table. Rather than waste the 18 minutes or so that the procedure takes, the team gives out comic-book-style educational material explaining the importance of condom use and post-op care. 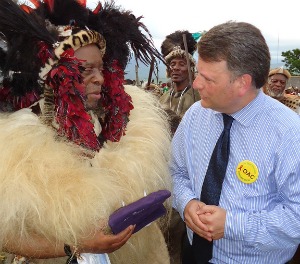 At a December meeting with the South African minister of health at the palace of the Zulu king, Schenker agreed to send 10 delegations to South Africa this year to replicate Asiphile in up to 40 more hospitals in the province, depending on availability of donor funds. The aim is to circumcise 1,000 men per month.

A powerful personal and professional experience

“It was very powerful personally and professionally,” says Lavi, who helped formulate the OAC nursing guidelines for adult MMC under local anesthesia. “We needed not only to teach them how to do the procedure but how to do it in high quality and high volume, over 30 procedures per day.”

Lavi tells ISRAEL21c that local men are highly motivated, since their king does not allow uncircumcised men to become Zulu warriors. In addition, “nearly every person we met there has AIDS in his family. One male nurse in Asiphile who was circumcised by the first delegation told us that his sister had died three months before of AIDS.”

OAC delegations always include an Israeli Muslim or Christian nurse or doctor, plus trained personnel from Senegal, so as to emphasize the strictly humanitarian nature of the mission. “We are coming as volunteers to help them fight AIDS,” Lavi stresses.

Ross adds that while South African attitudes toward Israel are somewhat strained between governments, “at the level of the average person in the street of Zulu ethnic origins, there is no animosity as such, and probably a fair degree of interest in how and why the Israelis got to be involved in high-volume MMC initiatives,” he says.

Among the project’s major funders is Discovery Health, South Africa’s private sector insurance company; the Victor Daitz Foundation; and Sir Roger Moore and his wife, Lady Kristina, who Schenker says are enthusiastic about Jewish and Muslim surgeons coming together to support HIV prevention in southern Africa.