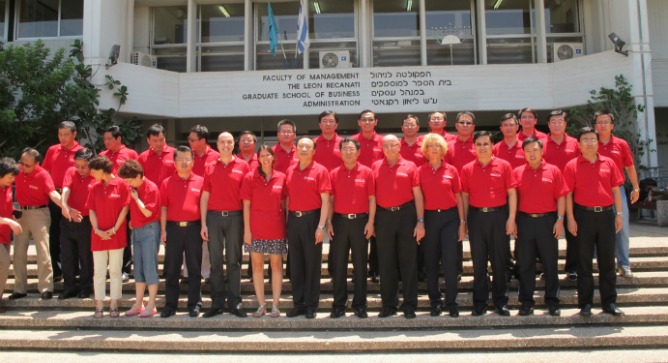 Over the next five years, about 1,000 senior executives, government officials and entrepreneurs from the Chinese city of Nanjing are coming to Israel for a one-week crash course given by the LAHAV Executive Education program at Tel Aviv University (TAU).

“China knows it cannot prosper just from production and cheap labor,” LAHAV director Udi Aharoni tells ISRAEL21c. “They want to learn our secrets for commercializing inventions and intellectual property, the role of venture capital and how the Israeli government nurtures technology through an incubator system.”

The first delegation arrived soon after the five-year agreement was signed during a Nanjing Day celebration on the Tel Aviv University (TAU) campus on May 21, marking 20 years since the establishment of diplomatic relations between Israel and the People’s Republic of China. Additional delegations will arrive every two months or so.

Participants go on field trips to places such as Omer Industrial Park and Better Place, meet with successful entrepreneurs and high-tech gurus including Yossi Vardi, watch innovation in action at hospitals and banks, and visit university tech-transfer companies in addition to major Israeli tourist sites such as Masada.

“They like the program so much because of its three components: education, site visits and touring,” says Orly Fromer, resource development adviser to the TAU president Joseph Klafter.

Nanjing is the capital of the Jiangsu province, where the Chinese government is investing in a plan to shift from a cost-based economy to an innovation-based economy. Part of the investment is going toward training at LAHAV.

“They wanted to understand why a country our size, with no natural resources, has 100 rated NASDAQ companies while the Chinese have much less,” explains Aharoni.

Strategic steps for Israel and China

This is just the latest aspect of a wider China-Israel connection rapidly warming up on academic and commercial fronts. 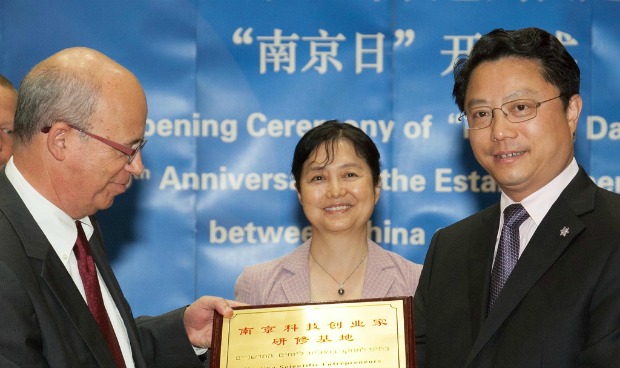 In 2000, the Israeli Chamber of Commerce in Shanghai founded the PTL Group to offer Israeli companies logistical, manpower and financial services in China. And last year, a new industrial incubator for Israeli companies was established in Wujin, between Nanjing and Shanghai.

“The Consulate General of Israel in Shanghai sees the promotion of relations with Jiangsu province as an important strategic step in enabling Israeli companies to enter the Chinese market and in advancing technological cooperation with China,” said Jackie Eldan, consul general of Israel in Shanghai. “Jiangsu province is one of the most advanced regions in China and one of the most important drivers of the Chinese economy.”

Nanjing officials broached the executive training idea during a visit to the university in November 2011. Fromer says the choice made sense: TAU has the largest faculty of Far Eastern studies in the region, and every year, about 200 TAU students register for Chinese language, history and culture classes. A 2007 agreement provided for a Confucius Institute on campus.

“The basic idea was that Nanjing has a lot of similarities with Israel,” says Aharoni, who visited with Fromer in July. “The population is eight million people, like in Israel, and the Chinese have thousands of years of history as the Jews do. When I went to visit, I really felt at home. Although we have a totally different culture, we have a lot in common.”

The university engaged a local translation service to render the written materials for the executive course into Chinese, which has 3,000 letters in contrast to Hebrew’s 22. Teaching is conducted in English, with simultaneous translation by an interpreter, and each delegation also brings along its own interpreter.

Despite linguistic and cultural differences, the Chinese and Israelis each gain much from the venture, according to Aharoni. “There is a lot of potential for knowledge transfer from universities and companies in both places.”

Fromer expects that future joint projects will include faculty and student exchanges and research collaborations between TAU and major universities in Shanghai and Nanjing.

UNCOVER ISRAEL - Get the ISRAEL21c
Weekly Edition free by email
Sign Up Now!
Bring Israel's story to life.
Millions of people around the world rely on us to gain a deeper understanding of Israel. We are the trusted source for original content you won't find anywhere else.
You can make a difference. Donate today to support journalism that brings Israel’s story alive.
SUPPORT ISRAEL21c
Read more on:   LAHAV, Nanjing, Israel-Sino, Entrepreneurship, Tel Aviv University, Technology, Innovation