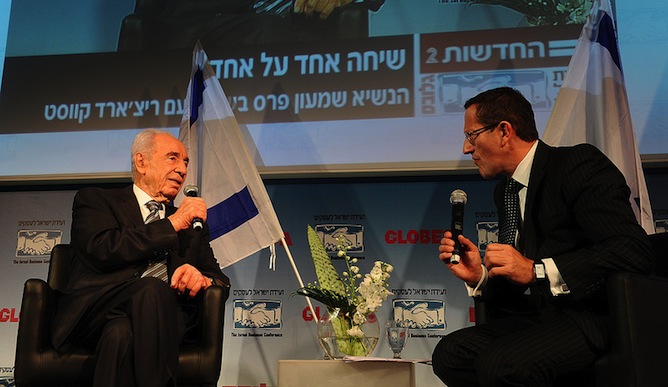 Nobody was resting on their startup nation laurels at the Globes Israel Business Conference on December 8 and 9, 2013.

The annual economic event in Israel is not about back patting, but about taking stock of coming challenges and suggesting solutions to meet them. Along with 3,000 participants from Israel and abroad, ISRAEL21c sat in on candid discussions about these issues at the David Intercontinental Hotel in Tel Aviv.

Many leading economists, scholars, decision-makers and executives believe that government spending and education priorities will dictate Israel’s ability to stay ahead of the global innovation curve. They are also seeking ways to help average Israelis reap the benefits of the country’s high-tech accomplishments.

‘How many of you know how to program?’

“How many of you use technology on a daily basis?” asked Yoram Yaacobi, general manager of the Microsoft Israel R&D Center, in a session titled “Innovation as an engine for growth.”

Every hand in the room went up, of course. But almost every hand came back down when Yaacobi continued: “How many of you know how to program?”

This reality, he said, illustrates one of the biggest challenges to the startup nation.

“Our top priority over the past two or three years is human capital,” Yaacobi said. “At least once a month, I meet with another international company that wants to open an R&D site in Israel, and they all need engineers. But the number of university graduates in these fields has dropped by half in the last 10 years. We need to invest more in teaching these subjects.”

On a positive note, Yaacobi said that while India and China have greater numbers of engineers, Israel offers the added value of entrepreneurship. “That includes the ability to implement innovative ideas and the ability to knock on doors until somebody agrees to back those ideas. This is what we can give that other places cannot.”

“Israel is a world leader in the size of the Internet economy. However, the potential for harnessing the Internet to secure Israel’s position as a global innovation leader hasn’t been fully realized,” Avni said. “E-nnovate offers downloadable information and insights to promote the implementation of technology that is innovated here.”

Microsoft’s Yaacobi revealed that for the past three years, the heads of global companies’ R&D centers in Israel – about 45 in all — have been meeting to discuss mutual concerns, and how to enhance cooperation with the academic and public sectors.

“In no other place than Israel do competitors sit together and talk,” pointed out Israeli Chief Scientist Avi Hasson.

Hasson said that rather than thinking in terms of high-tech versus low-tech, one actually impacts the other.

“High-tech accounts for just 10 percent of our workforce,” he said. “But in the Ministry of Economy, we look at the global picture, including plastics, textiles and other manufacturing areas. Companies from around the world are coming to us for solutions, so we have invested half a billion shekels in R&D for traditional industries that a few years ago were at the end of their market life. They were able to recover and achieve good results.”

One example is Paskal, a kibbutz-based textile company that has been manufacturing fasteners since 1978. “Zippers are one of the most low-tech products, and Paskal had to reinvent itself,” said Hasson. The company has added cutting-edge products to its line, such as waterproof bags and closures.

“Companies are coming here for that innovation, for our ability to put together knowledge from the academic world with the business world, to take things that happen in high-tech and adapt them to traditional industry,” said Hasson.

“As the orchestrator of all this, we must learn how to leverage our culture of entrepreneurship in high-tech and look 10 years ahead to cope with competition.”

“We can’t speak Hebrew to English-speaking foreign investors,” Bach said. She announced that TASE plans to establish new indices that will enable lower-risk investment opportunities in a basket of high-tech companies.

“Can financial engineering cure cancer?” That question was explored in a life-sciences session hosted by the Israel Center of the Milken Institute, an economic think tank based in California.

The problem is what panelists referred to as the “Valley of Death,” a funding gap for early-stage drug development coupled with venture investors’ strong preference for late-stage life sciences. This affects drug and device development in every country, but nontraditional models for financing biotech could accelerate Israel’s burgeoning life sciences industry more than others.That’s because Israel is one of the only places in the world where the government participates in the private sector, explained Roger Stein of the Massachusetts Institute of Technology’s Laboratory for Financial Engineering. “There is a real opportunity for Israel to become a hub for financial innovation in healthcare and biotech innovation.”

Dr. Einat Zisman, CEO of Hadasit, the Hadassah Medical Organization’s tech-transfer arm, said close interaction between academia, industry and government is essential for this to happen.

She lauded the recently announced BioBoost, a consortium of OrbiMed Israel, Johnson and Johnson, Takeda Pharmaceuticals of Japan and the Office of the Chief Scientist to establish FutuRx, a public-private biotech incubator in Israel. “The shareholders collectively invested $2.5 billion,” she said. “Over eight years, they hope to start 30 or 40 companies.”

Ora Dar, head of the Life Sciences Sector at the Office of the Chief Scientist, called for a public-private philanthropy partnership to advance innovations in biotech. “Because there is so much risk involved, we want a structure that will bring in philanthropic funds,” she said.

Leonid Bakman, founder and executive director of the Israel Innovation Institute, said that innovation isn’t limited to scientific breakthroughs. He pointed to Israel’s excellence in digital healthcare as a driver for business opportunities.

“In the past decade, most health data has been digitized in each [government] HMO,” he said. “Imagine what can be done with such a database. We can attract many entrepreneurs to Israel who are interested in possibilities for information sharing –helping each patient manage his or her treatment in the best possible way, and helping doctors manage the diagnostic process. We can create an environment to ensure all this effort creates innovation and essential values.”

Click here for details Increasing affinity, understanding and joy for Israel through education Click here for details
Bring Israel's story to life.
Millions of people around the world rely on us to gain a deeper understanding of Israel. We are the trusted source for original content you won't find anywhere else.
You can make a difference. Donate today to support journalism that brings Israel’s story alive.
SUPPORT ISRAEL21c
Read more on:   conference, Technology, Innovation, Biotech, Social Action, Education, Israeli technology, Health