Why? Why would anyone want to schlep mattresses, a grill, sleeping bags, tent and toothbrushes to camp in the wilds of Israel?

I ask myself this question each time my husband, Jonny, and I load up our Fiat 500 with all our camping equipment and stuff, making our tiny auto look like a circus car from which we remove all the above items.

And a light to see by in the darkness, provided you check the batteries. Which I forgot to do before we left our house in the Western Galilee and headed north. A car full of camping gear. Photo by Diana Bletter

I have been camping with Jonny and our blended family of six children for almost 30 years.

We’ve camped in Horshat Tal, in the north, often. One time, when soldiers in a nearby army base were told to go into shelters because there was the possibility of missile attacks, we were lying in a tent.

We’ve camped on the Sea of Galilee and instead of grilling our food, we headed for the Pagoda Restaurant in Tiberias.

We’ve camped near Mitzpeh Ramon, where “Star Man” Ira Machefsky set up telescopes for us in the middle of the Ramon Crater when there was very little moon and thousands of stars. As hard as I try, I still can’t fathom how the stars I looked at no longer exist, and how they traveled millions of lightyears just to reach here.

The pop-up tent that got away

This time, Jonny and I decided to camp by ourselves. Not that we don’t like being with the whole hamoula (clan), but a few weeks before, 18 of us had gone camping in the Jordan Valley. That was when we used our trusty pop-up tent. You take the tent out of its case, toss it into the air and voilà, it’s set up.

A week later, one of our sons took it camping near the Jordan River. He and his friends forgot to put something inside the tent to weigh it down, and voilà again, the tent popped up and flew away.

Jonny and I drove along the northern road through the hills. There’s a section by Rechaniya, the Circassian Village, where I feel like I’m in a mountainous forest in Switzerland. As we drove, it seemed very quiet in the car.

I thought about the times we drove to camp in our van, and I’d look in the rearview mirror and see — well, not our children’s smiling faces, as you’d expect — but their flailing limbs as the three boys conducted wrestling matches despite being buckled up.

Now it’s just the two of us. I was driving and I could barely see anything through the rearview mirror because of all our stuff.

“You brought a sweatshirt to camp in Israel in June?” Jonny asked me.

I had to laugh. Before we rode our motorcycles from New York to Alaska, Jonny had convinced me not to bring a sweatshirt because I wouldn’t need it. Who doesn’t take a sweatshirt to Alaska?

I had to buy one in Edmonton, Alberta.

“I like to bring things with me so I have them,” I said. “I probably would have brought our whole house if it could have fit it into the car.”

Then we pulled into a campground in Beit Hillel, near the Snir Stream (Hatzbani) Nature Reserve, and set up our 27-year-old tent. The Snir Stream in the Galilee. Photo by Diana Bletter

All of us used to sleep inside it, making me feel like I was the old woman who lived in the shoe.

I set up our new mattresses, so we no longer feel like we’re sleeping on a bed of nails. 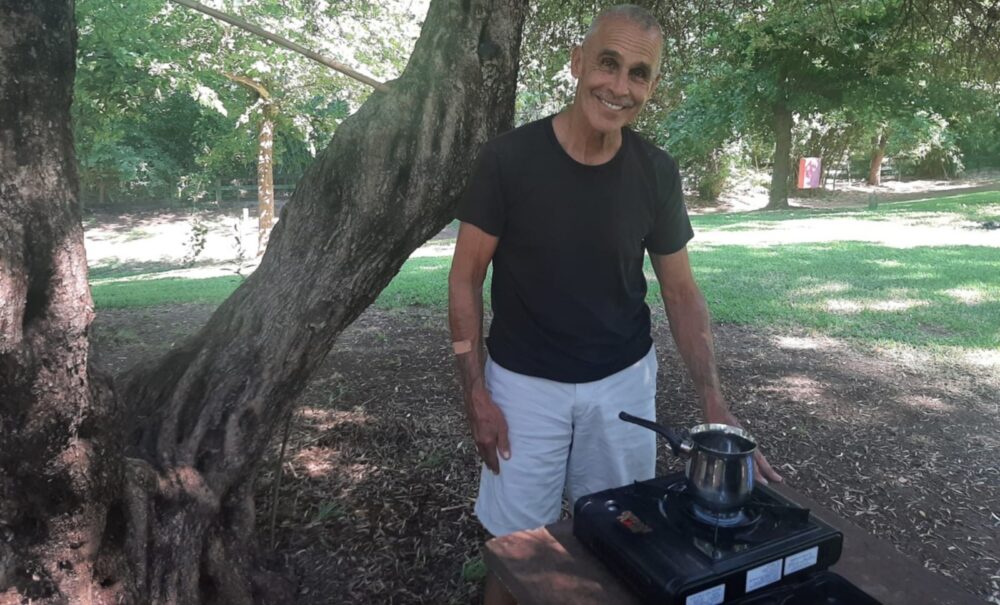 Then we decided to go to the stream for a swim. Jonny put our skewers of lamb in our insulated bag, underneath our dry ice and water bottles, but the bag didn’t zip.

“Are you sure it will be safe?” I asked, thinking about bears and moose that we always had to consider on our trip to Alaska.

“Who’s going to come here?” Jonny asked. “A cat? And is it a weightlifter that can pick up two liters of water?” 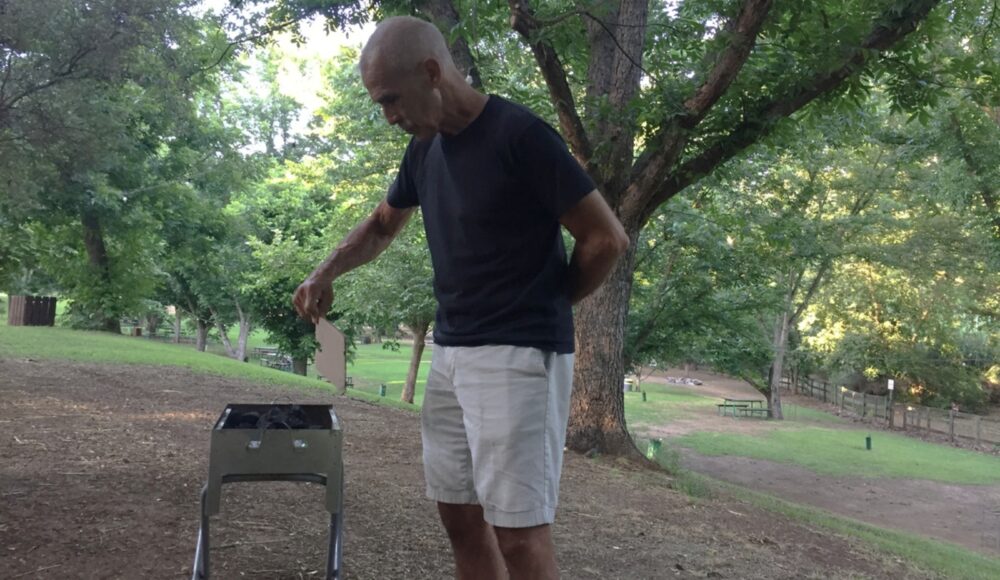 The author’s husband fanning the coals with a “nafnaf,” an Israeli barbecuing tradition. Photo by Diana Bletter

We followed a path along the Snir, the longest tributary of the Jordan River. It goes past towering eucalyptus trees, oak trees, and ficus trees with incredible root systems that look like sculptures.

Jonny sat on the rocks by the shore while I waded in. The water was ice-cube cold. The area was so verdant and lush that I was no longer in Switzerland but rather in a jungle in Papua, New Guinea.

That’s the thing about camping. For a few hours, life gets concentrated. It’s not about what to do, it’s more about how to be.

I watch the sun sinking down behind the Galilee hills. I listen to the rush of the water over the rocks.

At night, lying in the tent, I look up through the netting and then through the leaves of the oak trees, and there, right above me, is the moon shining down on me with a ridiculously happy look on its face that perfectly mirrors my own.

Israel is a small country and we don’t have vast outdoor vistas. Yet when I find that perfect place in nature, it makes me appreciate it even more.