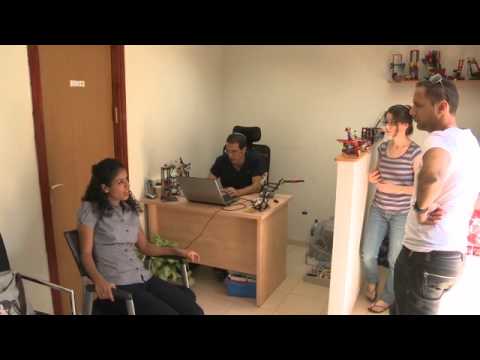 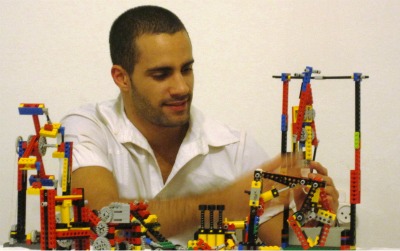 Sometimes the best ideas are born of misfortune.

“The project started when I was injured in an accident during my military service and was forced to spend seven months at home, on crutches,” says Amir Asor, who went on to conceive uniquely innovative programs that teach children the intricacies of engineering as they play with Lego.

From a diversion, internalizing the thought process behind lego model-building became a mission for Asor during that period. “I had the time and frame of mind to explore the possibilities, and built dozens of prototypes of each idea,” he tells ISRAEL21c.

Still only 26, he now heads the Decade Group, a rapidly growing business that conducts extracurricular programs for schoolchildren around Israel, and has just won the prestigious Entrepreneur of the Year prize from Britain’s Youth Business International non-profit organization.

“The Young Engineer programs are proving successful because the child uses his natural instinct for playing and learns through it,” says Asor.

As an example, he randomly chooses a model jeep, and explains how differentials allow the wheels to move at different speeds and different directions.

“That’s the secret of our success — when a naturally inquisitive child discovers this phenomenon, he plays with it.”

In November, he was awarded the Entrepreneur of the Year prize for “the fact that his invention is making a contribution to children’s learning and that he was able to turn a childhood disadvantage into a strong business advantage,” according to the YBI website.

“It was a year-long process to reach the final, but I really believe in what we’re doing,” he says. “One of my fears was that because we’re Israeli, we may have [had] less of a chance to win, but the judges told me they were impressed by the project’s effectiveness in educational terms. We can both stimulate children and teach them by integrating engineering with playing. It’s a new approach.”

He admits he did not play with Lego much as a child. “Like many kids, I had an enormous box with hundreds of pieces that didn’t always match, and thought it was a passing phase.” 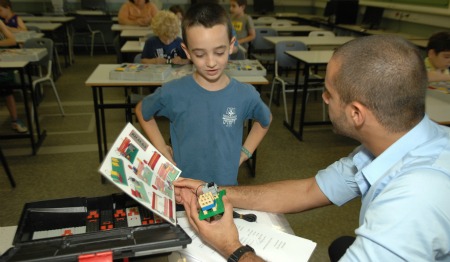 Construction toys such as Lego and K’nex helped him overcome his own barriers, he says. “I was a really bad student at school — I had learning difficulties and couldn’t concentrate.”

His interest in the children’s construction game was rekindled in his late teens. Then came the self-enforced intensive workshop after he was injured, and he later honed the concept in his Rehovot home while studying economics and computer science at Israel’s Open University.

“I’ve become a technology freak,” he says unapologetically. “I scanned the Internet and read a lot of books before deciding on what I want to convey. The combined concept of play and study has not been sufficiently explored. I understood the tremendous potential of this idea. After all, there’s nowhere in the world where the need for education doesn’t exist.”

The next stage was putting together prototype kits and presenting his initiative to the Israeli educational establishment, including school principals. “I found their attitude to be extremely positive, and once they’d seen the concept in action it wasn’t difficult to persuade them,” he says. 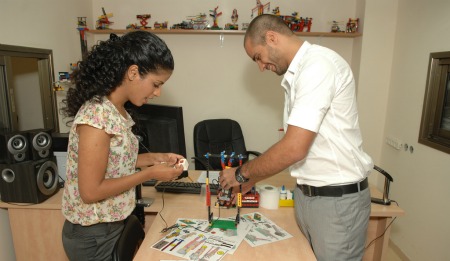 The Entrepreneur of the Year with one of his employees.

“Lego and the [Israeli] Education Ministry had introduced an unsuccessful school program in the 1980s and 1990s, which failed because the children weren’t having fun. This approach has never been tried since.”

The road from a bright idea to an ongoing concern can be long and bumpy, and Asor says that without the financial and logistical support of the Keren Shemesh Fund for Young Entrepreneurs (http://www.israelbusiness.org.il/financialassistance/smallbusiness/shemesh), he would not have gotten this far so quickly.

The Young Engineer project began as a one-man venture in 2008, involving about 100 students in 10 education centers.

“By the second year we grew to 1,100 students in 91 locations around the country,” says Asor. “This year we have 2,500 children in 135 educational centers. The courses have been revised several times — we’re constantly monitoring the students’ reactions.”

Asor and his team of 25 offer Big Builders for preschoolers using K’nex; the Lego Challenge, introducing six- to 12-year-olds to basic principles of mathematics, science and engineering; GaliLego for graduates of the latter; and an advanced Robotics and Software Engineering program for children over nine. Participants receive custom-designed kits with which to build the models at the weekly sessions.

“The next step will be to translate all the curricula into foreign languages and export it all over the world,” says Asor. “The English and Spanish versions are already ready. In five years we aim to hold Young Engineer courses in 6,400 to 8,000 centers around the world.”

Click here for details Increasing affinity, understanding and joy for Israel through education Click here for details
Bring Israel's story to life.
Millions of people around the world rely on us to gain a deeper understanding of Israel. We are the trusted source for original content you won't find anywhere else.
You can make a difference. Donate today to support journalism that brings Israel’s story alive.
SUPPORT ISRAEL21c
Read more on:   Decade Group, Amir Asor, Israel, engineering, Lego, Social Action, Innovation, Education, Business