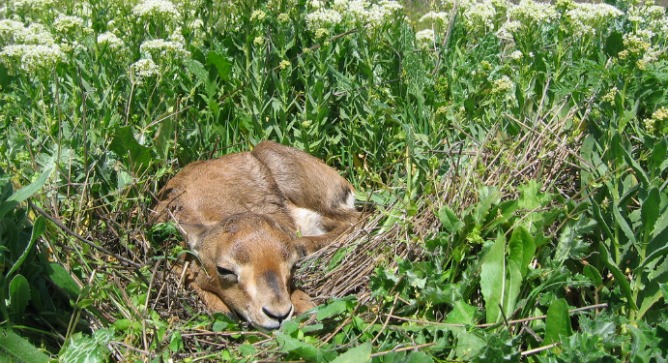 A resident gazelle takes a nap in its Jerusalem habitat. Photo by Amir Balaban

When tractors break ground at the Gazelle Valley in Jerusalem this January, a new and unique chapter in the city’s efforts to “go green” will begin. After a decades-long fight to keep developers away from the site, Israel will finally get its first wildlife nature park located within a city, and Jerusalem will have preserved a precious open space in its urban heartland.

Gazelle Valley is about 64 acres of choice, undeveloped land and is the largest open space left in Jerusalem proper. Located on the edge of the Givat Mordechai neighborhood in the city’s southwest, opposite the busy Patt Junction, its name comes from the small flock of wild mountain gazelle that live there.

For years, Gazelle Valley was the object of a battle that pitted a coalition of environmentalists and local residents against real-estate developers. In March 2012, the Jerusalem Magistrate’s Court ruled against the developers, paving the way for a park where the gazelles can roam free in a natural habitat, and where humans can observe them up close.

“In Israel, 93 percent of our population lives in cities, so the quality of the urban environment is very important,” says Naomi Tsur, Jerusalem deputy mayor for planning and environment.

She was critical to the effort to derail the developers, having spent 10 years as director of the Jerusalem chapter of the Society for the Protection of Nature in Israel (SPNI) and two years directing the NGO’s urban activities throughout the country.

“Nature and open spaces are an integral part of a healthy city. They have to be available for local residents,” Tsur tells ISRAEL21c.

Benefits the animals and the people

The idea for the park, to be called the Gazelle Urban Nature Park, germinated when two things became clear: The herd of gazelle that live there was diminishing and needed protecting — they were getting hit by cars on the adjacent Begin Highway, and killed by jackals and wild dogs that prowled in the valley — and the 150,000 people who reside in the surrounding areas needed a “green lung” for recreation as their neighborhoods densified.

With input from a coalition of stakeholders including environmental organizations and local residents, Tsur put together a plan for the park that the Jerusalem Planning Committee approved in 2008, though the fight with the developers continued in court where they finally lost their bid last March. 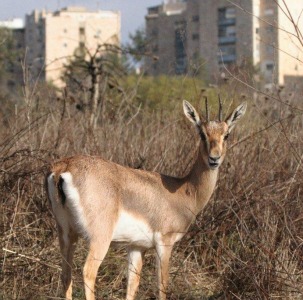 The land, once planted with kibbutz-owned orchards that supplied fruit to Jerusalemites during the War of Independence and the Arab siege, is now slated to become the city’s premier nature initiative. Funded in part by the Jerusalem Foundation, it will be built in stages over the course of the next 10 years.

“The park will be divided into three sections,” explains Amir Balaban, wildlife expert, photographer and SPNI cameraman. He teamed up with Tsur to become a leading advocate in the fight against the developers.

The smallest parcel, about 12 acres, will be used strictly by the gazelles as their natural habitat. Another 32-acre section is designated for picnic grounds, while the remaining 15 or so acres will act as a barrier zone between the other sections. This is where a visitors’ center will be built.

“People can get close — but not too close — to the gazelles,” Balaban tells ISRAEL21c.

Stage one of the plan, expected to be completed by next August, will include reorganizing the valley’s natural core with new plantings, increasing the surviving gazelle herd from four to 15, and building the first of two promenades.

The second stage will focus on two streams that run through the valley. Plans call for reorganizing their banks to create five water ponds that will be accessible to both gazelles and humans and also act as a barrier between them.

Stage three will see the building of the visitors’ center and other structures; stage four calls for a second promenade with street-level observation points; and the last stage envisions a second visitors’ center.

The Gazelle Urban Nature Park will remain open to the public during all phases of construction and there will be no admission fee.

Balaban predicts it will be “a park for everyone,” including tourists and local schoolchildren and families.

As the first urban nature wildlife preserve in Israel, the Jerusalem park could pave the way for other initiatives throughout the country that promote urban nature as a resource for leisure, education, tourism, research and culture, Balaban says.

Tsur notes that world eyes are watching as well. “The Gazelle Urban Nature Park is the Legacy Project of Jerusalem’s Local Action for Biodiversity (LAB) program, the forum where Jerusalem and its urban nature initiatives interface with dozens of international cities,” she says.