The future of our brains was on the table this week at the first-ever Braintech Israel event in Tel Aviv.

Neuroscientists and entrepreneurs from around the block and around the world convened to hear Israel’s President Shimon Peres promote leading-edge research of the brain. Conveniently, Israel has a vested neuro-technologies interest.

Next-generation neuro-technologies related to diagnosis and treatment of brain disease, brain-machine interfacing and brain-inspired computing were all featured at the event, which was conceived by the 90-year-old president and developed by Israel Brain Technologies (IBT), a nonprofit organization.

BrainTech not only shone a large spotlight on the key Israeli biomed companies advancing technologies to solve our brain’s biggest pathologies, it gave a futuristic push with a $1 million prize to one of the best brain projects of the world in terms of potential impact and practicality.

From 10 research groups in the running, a panel of judges chose to award the Moshe Mirilashvili Memorial Fund B.R.A.I.N. Prize to the BrainGate group from Brown University in the United States, led by John Donoghue.

BrainGate has shown the first human uses of an implanted neural sensor and neural interface system to control prosthetic arms in three-dimensional space. It also allows people with motor disabilities to get up from a wheelchair.

“Being able to see the storm coming, our technology could be applied to treating epilepsy and in the future one could have a tiny pump that could deliver a dose of drug right where it is needed.”

The Israeli prize will help them miniaturize their implantable read-out technology.

Donoghue was impressed by the two-day event in October. “This conference — this magnitude and scale — I have never seen anything like it in the world,” he says.

His research partner Arto Nurmikko said Israel is particularly strong in the intersection of medicine and genetics as a driver of pharmacology, and in its bottom-up approach to developing biomedical devices.

Finding out about ourselves

In contrast to the annual Biomed event, BrainTech focused more on pure research, and the players who are on the cusp of making sweeping changes in treating brain problems.

“I do believe that we will understand how in the coming decade to make use of our true selves … every time we discover something new about the brain we discover something in parallel that we didn’t know about ourselves,” said Peres, a technophile and longtime proponent of brain research collaborations between Israeli and foreign scientists. 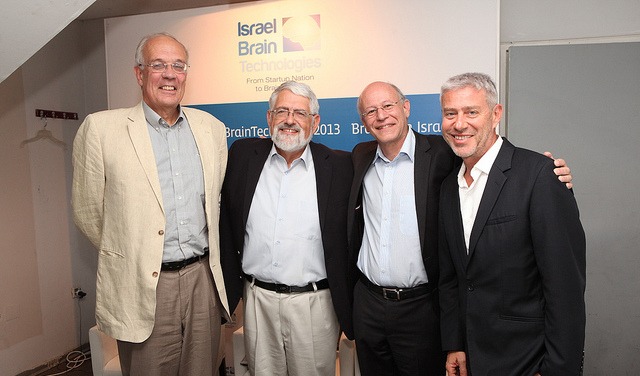 Bernard Dichek, editor of the Israeli online biomedical newsletter BioIsrael, was at the event to stay current. Of the dozens of companies on display and featured at roundtable events, his top picks for Israeli innovation in brain research are Nano Retina and InSightec.

Nano Retina has developed a chip to help people with damaged retinas to see. Dichek tells ISRAEL21c: “Since the retina is connected to the central nervous system, if they can do this for the retina, then they can do it for the rest of the brain.”

InSightech has just completed a study on 140 patients, showing a promising non-invasive ultrasound treatment for tremors. Nicole Fleischer, company marketing manager, says the technology will be available at Rambam Healthcare Campus in Haifa come January, for treating essential tremors or those associated with Parkinson’s disease. (Those interested in finding out if they qualify may call 972-54-657-4585.)

He points out that Israelis developed Copaxone for multiple sclerosis and Azilect for Parkinson’s.

ISRAEL21c tried out Neuronix NeuroAD, a device that can restore cognitive skills in people with mild to moderate Alzheimer’s disease over the course of six weeks, five days a week for an hour each time. Neuronix has the European CE mark and the Israeli Amar mark for use.

For more information on BrainTech 2013, see the conference site.