During the first coronavirus lockdown in the spring of 2020, all activity in Ben-Gurion International Airport screeched to a halt.

A female cat who had established herself as the unofficial mascot of passport control apparently had a tryst with an unknown boyfriend in the quiet terminal.

When members of the airport’s skeleton crew discovered her nursing five kittens one day, they pitched in to care for the feline family.

And when passport control inspector Keren Ravensky returned from furlough in June, she joined the cat crew, too.

“I like animals,” she tells ISRAEL21c. “I’m vegan and I care about them. I can’t see a cat inside the airport and not take care of it.”

Her heart went out especially to the black female of the litter, knowing there are many people who shun black cats out of the old superstition that they bring bad luck.

Here’s the story of how Ravensky’s affection for the black kitten named Nasrallah led her to be lucky in love.

A loved cat brings about a love match

Ravensky relates that the mother cat and two of her kittens eventually disappeared, as cats will do sometimes.

Airport personnel named the three remaining cats: the males are Louis and Michael, and their black sister is Nasrallah.

Yes, Nasrallah as in Hassan Nasrallah, Lebanese head of the terrorist organization Hezbollah.

Ravensky explains that coworker Lior Asulin chose the name because this frisky kitty used to play hide-and-seek when she was young.

“We’d hear her, but we didn’t know where she was, and we’d have to go looking for her. She was like Nasrallah hiding in a bunker in Lebanon.” 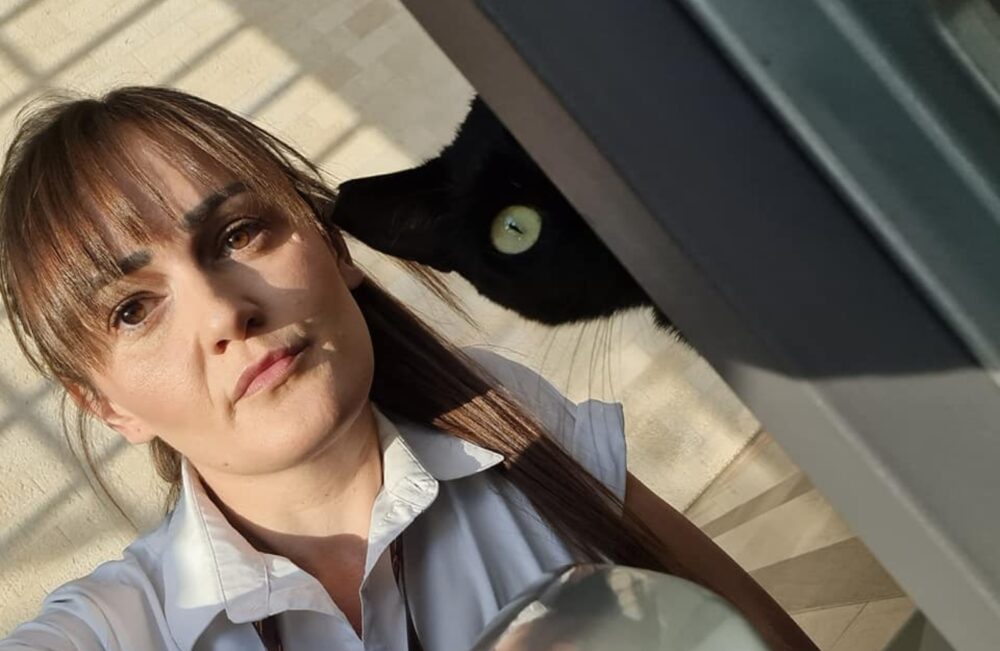 Ravensky opened a Facebook page called “Nasrallah Ahuvati” (“Nasrallah my love”) and also posted pictures of her favorite felines on local groups such as People&Cats and Chatulei Notbog (Cats of Ben-Gurion Airport).

And that’s how she found the love of her life, Ben Bargan.

“I posted pictures of Nasrallah and he reacted, and I started to talk to him,” relates Ravensky.

The two are getting ready to move in together, and plan to adopt Nasrallah and Louis (Michael prefers to hang around outdoors with lots of other felines at Ben-Gurion). 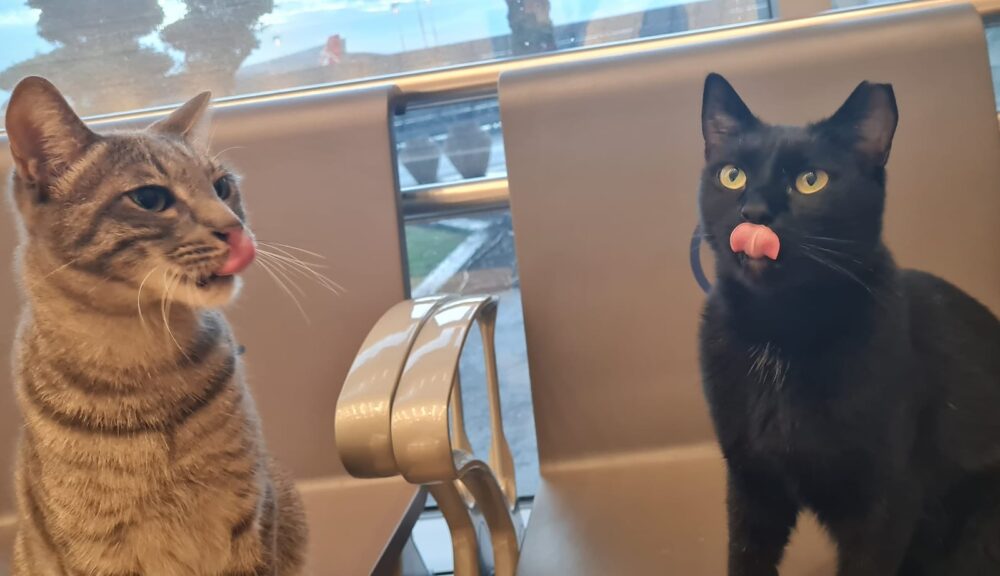 Louis and Nasrallah sitting in a boarding area at Ben-Gurion Airport. Photo courtesy of Keren Ravensky

Nasrallah in the news

Nasrallah has been featured widely in the local press. 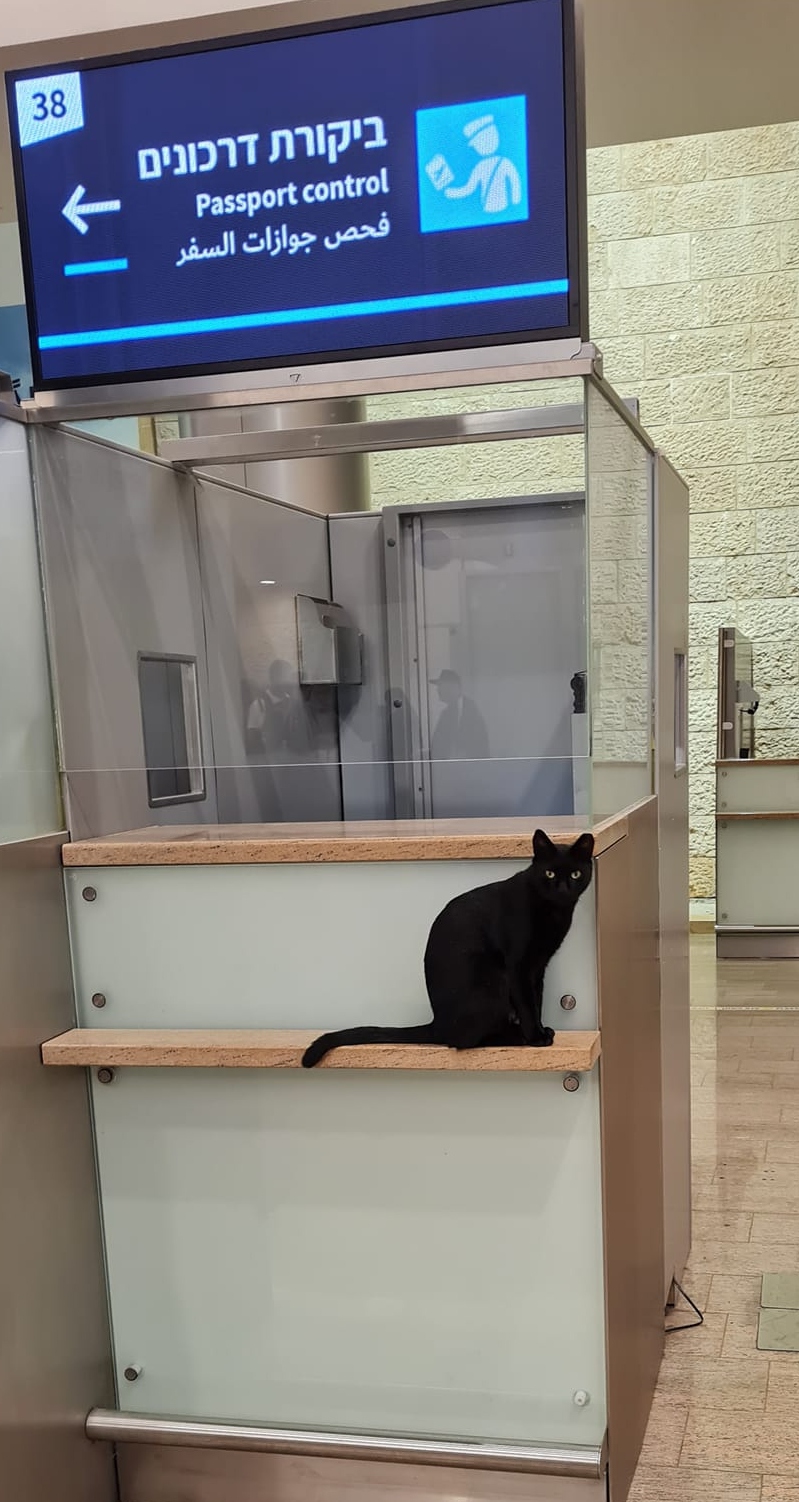 Nasrallah loves sitting on the shelf of the passport control counter. Photo courtesy of Keren Ravensky

“She sits on the counters. She’s very laid back and friendly. Her brother Louis is scared of people and keeps to himself, but Nasrallah walks around like she’s the queen of the place. I never saw a cat sit on the counter at passport control before.”

Travelers passing through the airport often take selfies with the famous feline.

But sometimes it’s a case of mistaken identity; there are two other black cats living inside Terminal 3, named Raven and Rocky. 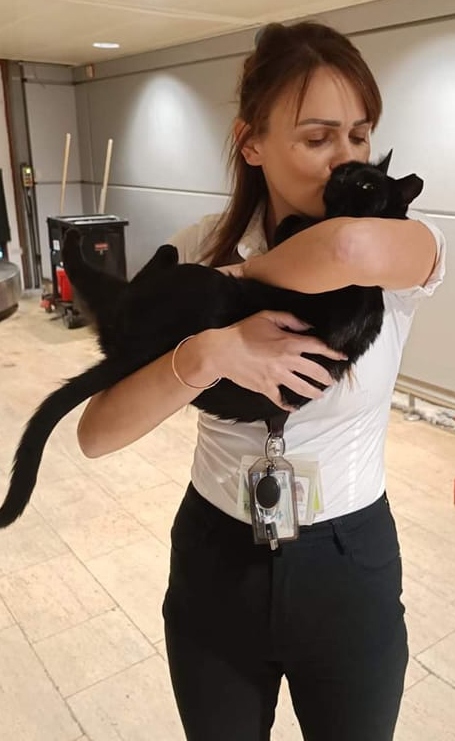 “They know how to get in and out. They know the airport better than me,” says Ravensky, who has worked there for seven and a half years.

She and many other airport employees set up outdoor feeding stations for the cats that have made Ben-Gurion their home. Airport rules prohibit feeding non-humans indoors (except for occasional snacks).

But the Airport Authority is hardly anti-cat. Far from it.

Ravensky tells ISRAEL21c that the Airport Authority has a budget to care for the strays on its property and supplies all the cat food for the feeding stations.

The powers-that-be even pay for the cats to be neutered or spayed. “They call Ronen Solomon the ‘cat whisperer’ and he brings them to the vet and then brings them back,” she says.

Keren and Ben, we wish you a lifetime of love and luck with your sweet Nasrallah and her shy brother.