The world’s fish stocks are depleting, matched with a growing global population and a steady appetite for fish and seafood. An important source of protein, farmed fish already comprise 45 percent of the world’s catch, with that number expected to rise to 62% by the year 2030, according to the United Nations Food and Agriculture Organization.

Since most of the cultured fish production is in developing economies, it would seem logical that fish-farming technologies would suit the needs of the people who grow the fish. But they do not, says Cobi Levanon, CEO of BioFishency.

Systems to improve yield are typically expensive and come packaged as an entire farm solution. A new monitor and filter product from Israel’s BioFishency will provide an affordable “black box” to fish farmers so they can grow healthier fish using less water — without replacing the whole farm. The box works for both freshwater and saltwater fish.

An added benefit of BioFishency’s product, now in development at the Trendlines Agtech incubator, is that fish waste can be used to fertilize farmers’ agricultural fields.

The company is working on setting up a pilot project with Palestinian fish and date farmers.

“What we are doing in the Dead Sea region in Jericho –– where we want to put our beta site –– is watering palm trees with the water used for growing fish,” says Levanon.

“The water is full of ammonia and nitrates,” he says, and these are good fertilizer materials for date palms. Early tests show that using the BioFishency filter, farmers can grow more fish and the dates subsequently grow much bigger, too.

This is of great interest in Asian and African countries that grow high densities of farmed fish and are looking to amp up production, says Levanon.

But the bigger picture is the environmental impact.

The BioFishency filter, based on bacteria, allows a fish farmer to use four or five times less water for cleaning the system, Levanon estimates. 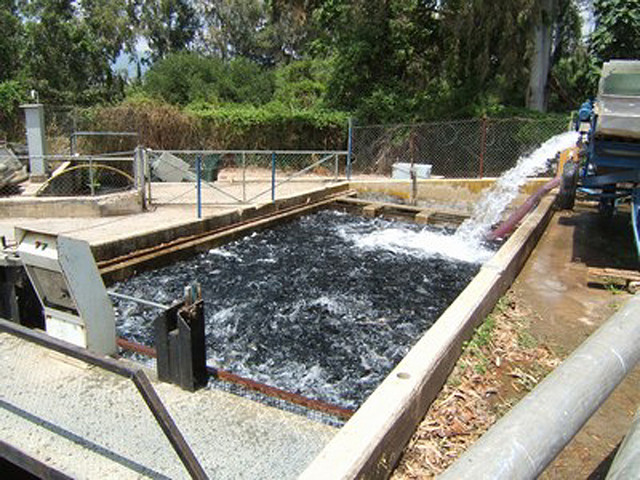 This lets date farmers and olive growers reduce the amount of synthetic fertilizers they use, which can be harmful to the environment.

Levanon and his co-founding partner, Igal Magen, together have about 20 years in the fish-farming business, with experience in Africa, Israel and around the world.

One bothersome issue that came up time and time again when they were developing projects was the lack of a reliable and cheap solution to control the water quality in inland fish ponds. So they decided to build one.

BioFishency, founded in 2013, has been funded with money from the Offices of the Chief Scientist in Israel. The company is based in Efrat, outside of Jerusalem.

The system monitors nitrogen and oxygen levels. Poorly filtered water containing too much nitrogen or too little oxygen compromises the health of the fish, and the rate at which they put on biomass, or weight. Even fish farmers working on the lake and sea aim for the biggest catch.

According to Levanon, there are good systems out there to filter water, but they typically require buying the whole setup, ponds and all. His is a plug-and-play module that costs a couple of thousand dollars. He is currently looking for an investment to market his device, and with that money will improve the technology expected to be ready within the next year.

Israel has a long history with fish farming, and because of that is among the first to revolutionize the business globally. In the past, Israelis could boast 300 kilos of fish per dunam (a quarter of an acre) and now document about 1.5 to two tons in the same-sized area, says Levanon.

He believes that his BioFishency solution can amplify the output of fish even more. This is important in areas where water is scarce and free food protein is not widely available.

Future updates on BioFishency will be found here at their website: www.biofishency.com