Bilingual speakers have more “plastic” brains than do people who speak only one language, according to two recent studies conducted by University of Haifa researchers.

Half of the subjects were monolingual Hebrew speakers and half were native Arabic speakers fluent in Hebrew as a second language.

The scientists were attempting to understand why bilinguals take much longer than monolinguals to react to audible cues yet demonstrate more subcortical brain activity than those who only speak one language.

“The synchrony between neural and cognitive-perceptual measures makes the research unique and reveals direct brain-behavior links, serving as the basis for a fuller understanding of bilingual speech perception in challenging listening conditions,” Karawani said.

“Whereas the effects of bilingualism on speech perception in noise are widely studied, few studies to-date have compared bilingual-monolingual performance when all participants are operating in their dominant language.” 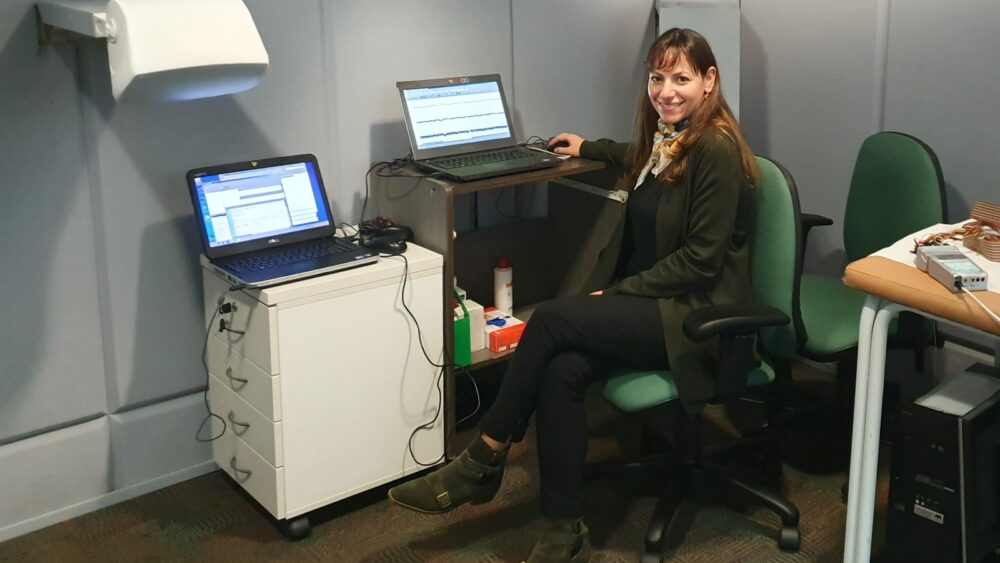 Dr. Karawani in her lab. Photo courtesy of University of Haifa

One of their studies, published in PLOS One, marks the first attempt to examine both perceptual and brain activity in bilingual populations.

As expected, both Arabic-Hebrew bilinguals and native Hebrew monolinguals performed better in quiet conditions than in noisy ones.

Under noisy conditions, the bilinguals were significantly less accurate in deciphering their second language in a noisy environment, but they were faster than monolinguals in detecting the characteristics of speech stimuli.

The researchers believe that’s because bilingual people’s brainstem responses are less susceptible to the effect of noise.

A second study, published in Cognition, demonstrated more sophisticated brain activity in the bilingual group as they fared much better than monolinguals in deciphering artificially generated speech.

These findings suggest that bilinguals use a shared mechanism for speech processing under challenging listening conditions.

Karawani and her team are currently investigating perceptual and neural processing of Arabic-Hebrew-English multilinguals and Hebrew-English bilinguals with the collaboration of Tamar Degani.