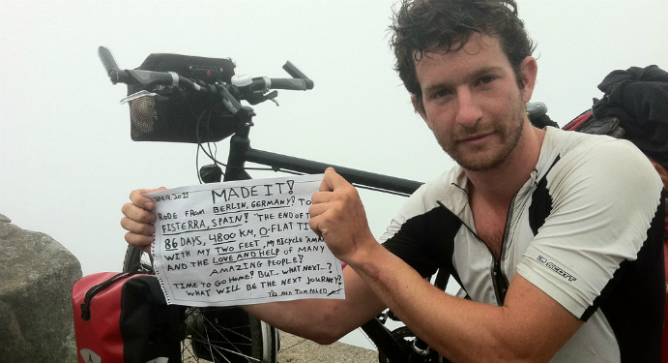 Peled at the end of his European bike ride.

Maybe you already wear a yellow Livestrong wristband supporting Tour de France cyclist Lance Armstrong’s foundation for cancer survivors. Now you can add a blue Bike for the Fight (BFF) bracelet in solidarity with Tom Peled, a 24-year-old Israeli planning to pedal across the United States to benefit the Israel Cancer Research Fund.

Peled went to Europe last summer in search of a mental and physical challenge to help him cope with his grief following his father’s cancer death in January 2011. While cycling his way solo across 3,000 miles and six countries, the idea of biking for a cause began to take shape.

“The more I progressed in Europe, the more I felt what it was doing for me in a positive way, and the effect on people I met on the way, who connected to my story and invited me to sleep and eat in their homes,” Peled tells ISRAEL21c.

“Every day and every experience convinced me to take what this journey did for me and spread the word, to harness the amazing energy that was around me all the time in Europe. The thing I most connected to was cancer, and the place to raise the most was the United States.” 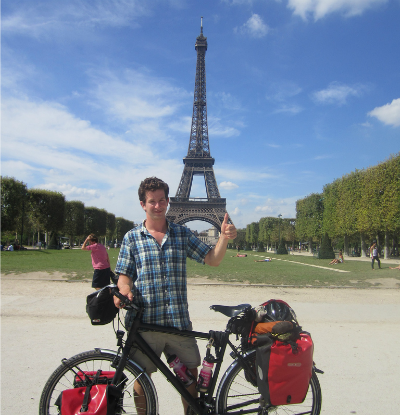 Tom Peled at the Eiffel Tower.

BFF rolled out with a June 1 Tel Aviv ride organized by the Interdisciplinary Center-Herzliya (IDC), where Peled is studying governmental strategy and diplomacy. On June 4, BFF supporters biked to the Rothschild Foundation “Save A Life Day” health fairs throughout Israel.

About 28,000 Israelis are diagnosed with cancer annually, and some 10,000 die from some form of the disease, making cancer Israel’s No. 1 cause of death.

Peled plans to start out from Los Angeles on August 1 and arrive in New York October 24. He’s booked speaking engagements all along the way, thanks to partnerships with the Maccabi World Union, Hillel: The Foundation for Jewish Campus Life, the Israel Embassy, the Reform Movement and the JCC Association. El-Al Israel Airlines is providing his flights gratis.

He will encourage people to join his cause by contributing or even accompanying him on a part of the journey. Microsoft Israel developed a Facebook and smartphone app enabling BFF donors to “buy” sections of Peled’s route and track his progress. Microsoft has pledged to match the amount raised.

As he gets ready for the trip, Peled marvels that it all came together. “How an idea turned into reality in seven or eight months, I would never have imagined. And we haven’t even started. Who knows what crazy and amazing things will happen?” 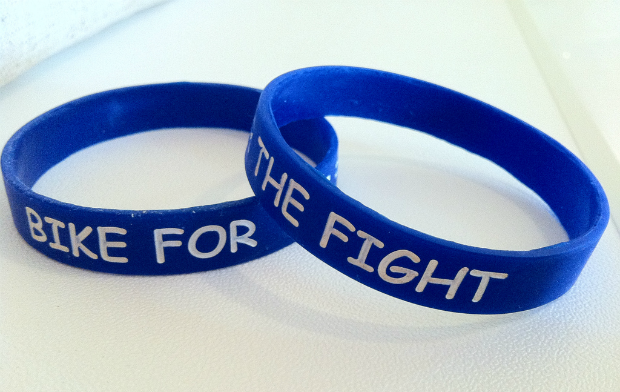 Peled, who lives in Kfar Achim between Ashdod and Ashkelon, hopes to make Bike for the Fight a brand, “like the Livestrong for the Jewish world.” He strongly recommends the healing power of a few months on the seat of a bike.

“I think everyone at a certain point needs to do something like this,” says Peled. “We live in such a hectic world, always running after the next thing. It was good for me to disconnect a bit and think about what’s important in life and what’s not. We put so much time and money into how we look and dress — the externals — and we don’t sit by ourselves, being 100% free. You don’t need to do a two-year around-the-world voyage to accomplish that.”

Ramy Peled, Tom’s father, fought a rare, incurable form of cancer for eight grueling years. When the end came, his eldest son cast about for a way to channel his sadness. Always a biking enthusiast, he decided he needed some time alone with his thoughts while exploring new horizons.

Through the website Couchsurfing.com, he found accommodations in Berlin for his first night. He made no other advance arrangements.

“I flew without any gear or maps. I wanted to start from scratch and keep it really cheap – I kept to a budget of 20 euros a day — because that would make me improvise,” Peled explains. 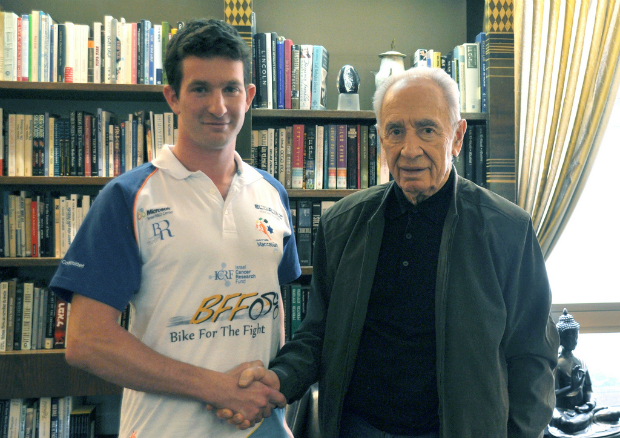 He bought a simple but sturdy touring bike for $1,000 euros in Berlin and added some bright red saddlebags to hold his belongings. He will use the same bike for BFF.

“Sponsors contacted me about riding with their [company’s] bike, and from a business point of view that may have been smarter, but the whole amazing thing about this project is the sprit behind it,” Peled reflects. “I knew this bike did a good job and as long as I can still use it, I prefer it.”

He was pleased to get a personal response from Israeli President Shimon Peres after writing to him about BFF. The president invited him to Jerusalem to wish him well on his journey.

As for his mother, Tamar, parting might not be so easy. Tom will embark around the same time his brother starts the army and his sister heads to Berlin.

“She understands; she feels this is me doing something important that my father would be proud of,” says Peled.

UNCOVER ISRAEL - Get the ISRAEL21c
Weekly Edition free by email
Sign Up Now!
Bring Israel's story to life.
Millions of people around the world rely on us to gain a deeper understanding of Israel. We are the trusted source for original content you won't find anywhere else.
You can make a difference. Donate today to support journalism that brings Israel’s story alive.
SUPPORT ISRAEL21c
Read more on:   People, Social Action, Cancer, Tom Peled, Shimon Peres, Bike For The Fight