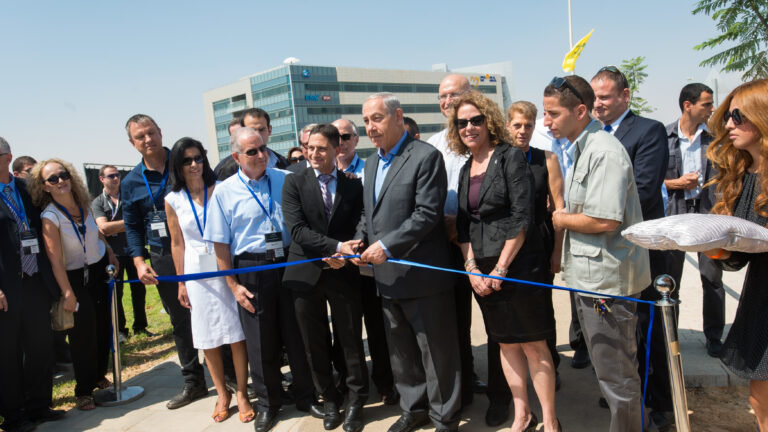 Cutting the rope at the dedication of the Advanced Technologies Park in Beersheva. Photo Credit: Dani Machlis/BGU 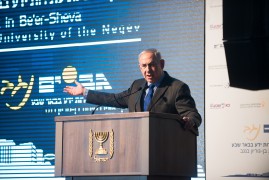 Prime Minister Netanyahu announces a historical turning point in Israeli high-tech. (Dani Machlis/BGU)
Beersheva’s new Advanced Technologies Park is being hailed as a defining moment for the high-tech industry as it stands to date. During the official inauguration, Prime Minister Benjamin Netanyahu – who earlier this summer declared Beersheva the national cyber center — told the crowd gathered that “this is a day that will change the history of the State of Israel.”

Netanyahu, as well as leaders of the high-tech field, are on a mission to turn Beersheva into a Silicon Valley of Israel’s south.
Earlier this summer, Netanyahu announced that IDF technology units will move to the city.

“The opening of the Advanced Technologies Park in Beersheva will be remembered as the turning point in the development of the Negev. We have always been at the geographical heart of Israel. Now we are on our way to becoming the true center for innovation and growth,” said Ben-Gurion University of the Negev President Rivka Carmi.

The Gav Yam Industrial Park Negev is owned by Bayside (56%), the Beersheva Municipality, and Ben Gurion University (22%), and KUD, a consortium of US and Japanese investors. The project is to include 16 buildings and a commercial street with 192,000 square meters of main space plus parking lots adjacent to the planned IDF C4I Corps campus, the north Beersheva train station, and Ben-Gurion University. The site also has building rights for a hotel and congress center.

Bayside CEO Avi Jacobovitz said, “The park will be at least as successful as the Matam Park in Haifa, and even more so, because in Beersheva, the IDF’s move to the Negev plays a role, as well as tax breaks that the government gives to businesses in the city.”

The first building of the ATP was completed and occupied this summer by such international giants as Deutsche Telekom, EMC² RSA, Dalet, dbMotion, Ness Technologies, and Oracle. New incubators Elbit Incubit and JVP’s CyberLabs have arrived and BGN Technologies, the University’s technology transfer company, has also moved into its offices in the new building. The second building is already under construction.

“From no high-tech jobs in the Negev, Beersheva is becoming a high-tech powerhouse in Israel,” said Beersheva Mayor Rubik Danilovich told a press conference.

UNCOVER ISRAEL - Get the ISRAEL21c
Weekly Edition free by email
Sign Up Now!
Bring Israel's story to life.
Millions of people around the world rely on us to gain a deeper understanding of Israel. We are the trusted source for original content you won't find anywhere else.
You can make a difference. Donate today to support journalism that brings Israel’s story alive.
SUPPORT ISRAEL21c
Read more on:   News, Negev, High tech, Industrial Park, Ben Gurion University of the Negev