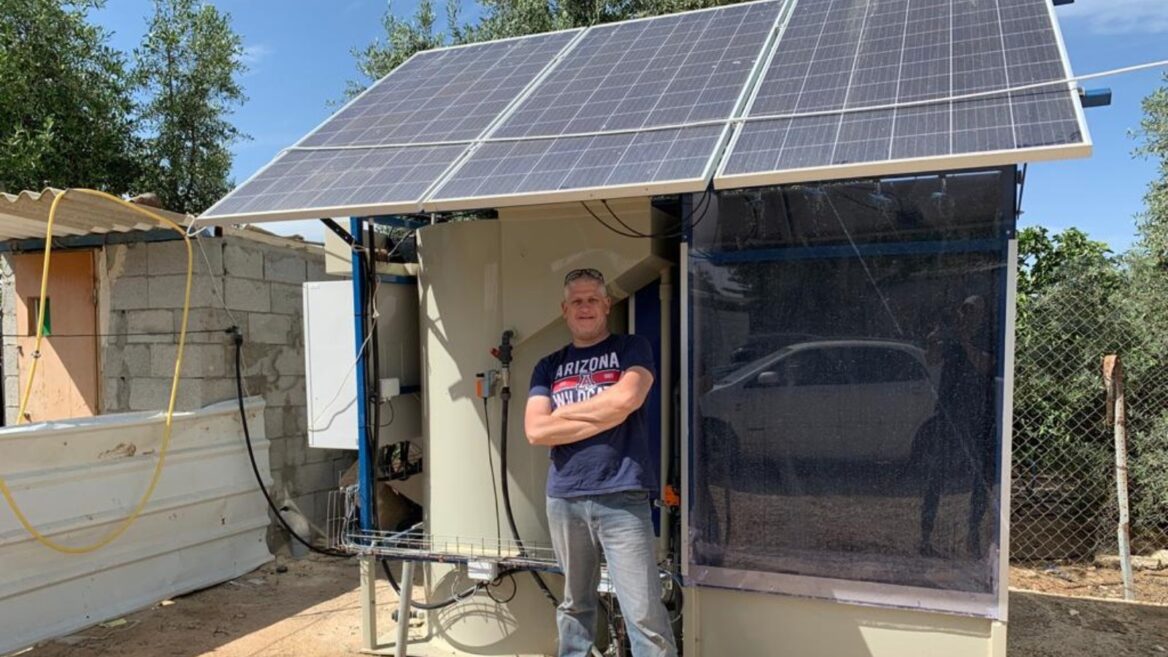 Clive Lipchin of the Arava Institute for Environmental Studies with the proof-of-concept sewage treatment system in a Bedouin village. Photo: courtesy

Up to 70 percent of the wastewater in the world is untreated. That’s a problem, both for the communities without sewer systems and for neighboring communities that suffer from contaminated groundwater leaking from cesspits.

Villagers in Umm Batin, a Bedouin village in Israel’s Negev desert, don’t want to dump their dirty water into the ground. But they’re lacking the millions of shekels it would cost to build a modern sewer system.

Clive Lipchin from Israel’s Arava Institute for Environmental Studies has developed a portable, cost-effective solution: a solar-powered, self-operating wastewater mini treatment plant that doesn’t need to be connected to the national sewer system.

In Lipchin’s system, the wastewater flows from household toilets, kitchens and sinks into a septic tank from where it is pumped into a series of treatment containers. Inside those containers, bacteria, fungi and algae remove the contaminants. The resulting treated water is not fit for drinking but can be used safely for agriculture.

Israel has long been a leader in processing wastewater for agricultural uses.

“It goes back to the 1970s and sends a strong message to the world that wastewater has value and should not be just disposed of,” Lipchin tells ISRAEL21c. “It can be treated and re-used as a way to offset water scarcity and to become less reliant on fresh water. That’s becoming even more important given the unpredictability of climate change.”

Small Bedouin villages – as well as those in the Palestinian Authority territories – have not benefited from Israel’s wastewater expertise.

Lipchin hopes his invention will change that – first locally and then for the world. The need is great; raw sewage is estimated to kill 1.7 million people a year, almost half of them children.

“Most of the world lives like the Bedouin,” Lipchin notes. “We definitely have plans to go beyond the Middle East.” Lipchin’s proof-of-concept system is treating the sewage water for one household of seven to 10 individuals in Umm Batin.

The village is divided into 10 neighborhoods, so ultimately, if enough of these systems were installed, they could process all the village’s wastewater “without the need for an expensive and technically problematic sewage network.”

The system works 24/7, storing its solar-generated power in a battery. The mini plant operates autonomously and is managed remotely via a mobile app. If there’s a problem – say, a broken pump – an operator receives an alert.

Operators don’t need to be on site. If the system were installed in rural Africa, for example, messages could pop up “on the phone of a trained engineer in Nairobi, not in the village itself. Then the engineer would drive down,” Lipchin explains.

Lipchin wouldn’t say how much each installation would cost, but it would clearly be beyond the abilities of the villagers – and beyond government’s as well if deployed on a large scale.

“We’d be looking for grants from development and aid agencies,” he says.

Another model: charging farmers a small fee for receiving agricultural water. “This is being done already over the world. Water services are not free. Otherwise you’re a charity. And that’s not sustainable.”

As director of the Center for Transboundary Water Management at the Arava Institute Lipchin develops infrastructure projects and facilitates communication around water issues between Israel and Jordan and Israel and the Palestinian Authority.

Originally from South Africa, Lipchin got interested in transboundary water work while doing his doctorate at the School of Natural Resources and Environment at the University of Michigan.

“Michigan is on the Great Lakes, so we had cross-boundary work between the US and Canada and between US states,” he explains.

He joined the Arava Institute — an affiliate of Jewish National Fund-USA — in 2003 as the lead researcher for a European Union project on the sustainable management of the Dead Sea. Following a NATO-sponsored science-for-security conference held at Kibbutz Ein Gedi, Lipchin published a book, The Jordan River and Dead Sea Basin: Cooperation Amid Conflict.

Water doesn’t understand borders, Lipchin points out, and you can’t address the dire ecological issues facing the Dead Sea only from the Israeli side.

The same is true with wastewater on the western side of the Jordan River. “Israel shares all our fresh groundwater with the Palestinians,” he explains. “We need to manage this bilaterally, whether it’s the mountain aquifer system in the West Bank or the coastal aquifer system that runs along the Mediterranean in Israel and the Gaza Strip.”

If wastewater is being dumped into the ground untreated in a village near Hebron, for example, it will seep into the water systems of nearby Israeli communities.

The problem is that the two communities don’t always talk to each other. Moreover, they have different political perspectives around land use and ownership.

Lipchin takes a decentralized approach in helping communities get more water for agriculture.“We work at a very local level. Oftentimes, communities never considered not having to go through a high-level approval process or negotiation.”

Ultimately, Lipchin sees his work as a building block to “promote good relations between people that can provide public support for a peace process. Once people understand that they can see their lives changed through cooperation, they see the other side very differently. It builds advocates for partnerships.”

Is he optimistic that something as mundane as wastewater management can make a difference? “I wouldn’t be doing this if I was not optimistic,” he says.

The Umm Batin project is funded by a grant from the JNF USA Water Task Force. JNF USA is a strategic partner for the Arava Institute.