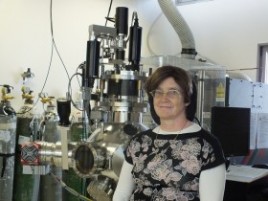 A Harvard graduate living in the ultra-Orthodox (haredi) city of Bnei Brak has just shattered a religious glass ceiling by attaining a prestigious academic appointment.

Prof. Malka Schaps, a mathematical researcher raised in Ohio as Mary Elizabeth Kramer, is the new dean of Bar-Ilan University’s Faculty of Exact Sciences. Few haredi women pursue higher education, and Schaps may be the only one to climb this far on the university ladder.

Speaking with ISRAEL21c, Schaps characterizes her life story as “fairly complex.” Indeed, this daughter of college professors not only excels in an esoteric field, but she also writes novels and reads ancient Greek history in the original language.

As a child in Washington, DC, she was firmly focused on science until – ironically enough – winning $250 as a finalist in the Westinghouse Science Talent Search. She discovered that many other finalists liked discussing literature and philosophy. So she used her prize money to buy books and spent her first years at Swarthmore College engaged in a personal philosophical search.

While working in a math camp at end of her sophomore year, she roomed with another counselor, a Jewish girl who taught her the Hebrew alphabet from an Israeli Telma soup poster, took her to Friday night services and introduced her to Jewish dietary laws.

By the time she graduated from Swarthmore in 1969, she had converted to Judaism and wed David Schaps, Swarthmore Class of ’67. They earned their doctorates at Harvard, she in math and he in classics.

Profs. Malka and David Schaps, right, visiting the Great Wall of China with other Israeli tourists.

Rabbi David Schaps, a former Israel Defense Forces chaplain, is a professor of classical studies at Bar-Ilan, a poet and author of such books as Economic Rights of Women in Ancient Greece and The Gates of Heaven: A Beginner’s Guide to Jewish Prayer. (His sister and brother-in-law, Ellen and Bernard Spolsky, are retired Bar-Ilan professors of literature and linguistics, respectively.)

Following a trip to Israel in the summer of 1970, Malka and David Schaps decided to apply for academic posts in Israel as well as in the United States.

“We felt Israel has more effect on the diaspora than the other way around,” she explains. “Living here is like being in the center of things.”

The couple accepted teaching positions at Tel Aviv University in 1972 and settled in Bnei Brak, gradually shifting to the right in their religious lifestyle. They switched to Bar-Ilan five years later and have been there ever since.

“I refused four times when the chair tried to persuade me to run for election to the job of dean as the department’s candidate,” Schaps says, explaining that she had founded the university’s program in financial mathematics and wanted to continue running it.

“I also wanted to make a new push on a difficult research problem which was stalled,” she adds with a sigh.

But one of the two other women in the department convinced her to accept the challenge. “I did it for the sake of raising the status of women,” she says.

In two years from now, Schaps plans to go back to her long-time research in spin representations, a futuristic quantum mechanics field having to do with equations in motion. “We research things I can’t even define for people,” she admits.

She is not yet sure how the new job will affect her writing schedule. Schaps is finishing a new novel, the third in a trilogy, exploring the relationship of former college roommates – one a Jewish convert living in Israel, the other a gentile mathematician in the United States.

“The non-Jewish mathematician is myself if I hadn’t converted,” reveals Schaps, who started writing in 1981 and has published seven novels for haredi readers under the pen name Rachel Pomerantz.

While writing books and advancing their academic careers, the Schapses raised two children of their own and cared for four foster children.

“We had a very small family of two children,” she explains. “The two closest neighbors in our apartment building each had 13 children. So we decided to take in foster children in 1982.”

The couple now has 17 grandchildren, counting those of the two foster children who stayed with the family until adulthood.

Bnei Brak residents who are aware of her professional accomplishments are impressed, she says. Yet Schaps does not see herself as a role model for haredi Israeli girls, because although they learn science and math unlike their male counterparts, they generally do not have the educational opportunities that were open to Mary Elizabeth Kramer.

“I got my PhD from another world,” she says. “I don’t know that my career has that much to say in Bnei Brak.”

Schaps muses that after she retires, perhaps she will work on upgrading the teaching of geometry in the ultra-Orthodox school system.

However, she does think that her novel A Time to Rend, A Time to Sew, about academics who became religious, was popular with haredi girls all over the world because it asserted that girls are just as smart as boys and can be successful in scientific careers. The book sold over 10,000 copies in three languages.