Seniors find no shortage of Zumba classes, bridge tournaments and college courses. But even for the busiest senior citizen there are still moments of loneliness at the end of the day or on weekends, says Dov Sugarman, program manager of technology and aging at Eshel, a JDC-Israel program for Israel’s elderly population.

Eshel is confronting the issue head-on using new tools available on the Internet.

The organization launched a pilot of Networked Seniors around the same time as a similar project funded by Microsoft in New York. The Israeli version moved away from trying to develop a new networking technology, says Sugarman, and focused instead on the interaction and social elements that seniors need to beat loneliness.

While working in a senior residence in the United States, Sugarman learned that loneliness is a universal problem for seniors. It can affect even the most active people, and it can lead to secondary problems like dementia.

Loss of a spouse or good friends can hit hard, Sugarman tells ISRAEL21c. And for people who have a hard time leaving the house because of mobility issues or vision impairment, the loneliness factor is magnified.

Sugarman and his team at Eshel have spent the last few years studying how to create a sense of community among Israeli seniors who may live far from one another. They decided to tweak Internet tools for ease of use (no password, for instance), and availability at the points where seniors need them.

Eshel started Networked Seniors at a senior center in Ramat Gan, just outside of Tel Aviv, with a dozen or so volunteers who wanted to connect online.

Rather than provide a passive approach to Internet accessibility, such as streaming lectures or one-on-one meetings, Sugarman decided to find a way to get many people meeting and communicating at the same time through a moderator, at times when they need companionship most — at the end of the day or on weekends. 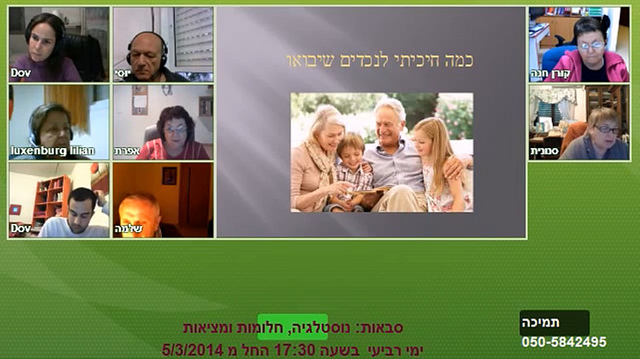 The group used the free service Skype in the beginning, about a year ago. But the bandwidth was not enough to support connectivity when many people logged on at the same time.

Now the group, no longer connected to the senior center, connects online from their own homes. The participants use a video platform provided by an Israeli company, Watchitoo, which allows up to 25 people to join a chat room at the same time.

“Our platform gives the chance for social relationships for people whose social networks have been decimated by illness and death,” Sugarman tells ISRAEL21c.

For now, online interactions are limited to 12 people at a time, and meetings typically form around a pre-determined theme such as religion, current events, healthy lifestyles, math games, positive thinking and grandparenting skills.

About 150 people are registered, and about 50 of them use the service on a regular basis. Some attend every series offered three or four times a week, as Sugarman and his team work to build content and a sustainable business model.

Connecting to the outside world

While the program aims to target those people who are especially isolated, anyone can join as long as they have the Watchitoo platform installed on their home computers.

Thanks to Networked Seniors, some people who meet online go on to form deeper relationships via phone calls or actual meetings.

“Our inclusion criterion is not only [people who are] home-bound,” says Sugarman. “We also aim for the socially isolated and disconnected.”

Rachel Zalmanovich, a 73-year-old from Ramat Gan, says that Networked Seniors has helped her cope with a speech disability after a stroke. She was already in a wheelchair from an accident in the 1980s.

At first she was embarrassed to talk to other people, but contact with the regular friends she has in the online group has helped her open up and see life much more positively.

“After some five months of very difficult, painful, and strenuous speech therapy, I began the art of slow, unpronounceable speech, and that’s when Networked Seniors stepped in as my major connection to the outside world,” Zalmanovich says.

Sugarman is thinking about structuring an online group for caregivers, usually foreign workers who care for Israel’s elderly in their homes. And he plans Arabic and Russian groups as well.

Meanwhile, Eshel is in touch with organizations in the United States that are eager to build a similar connection point for aging people using appropriate technology.