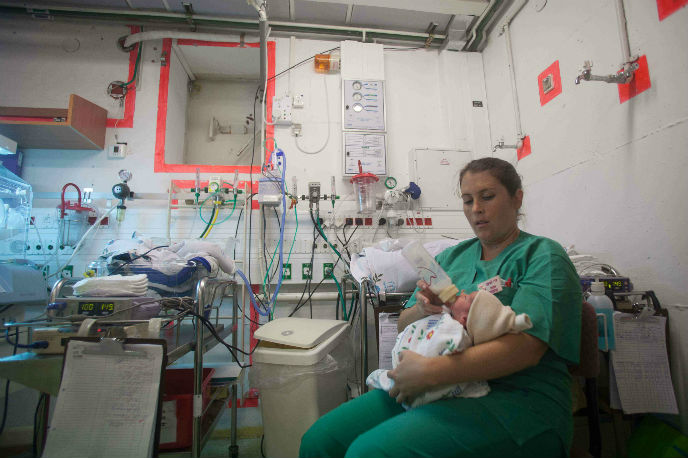 A nurse cares for a newborn in a shelter at Barzilai as a warning siren sounds for possible incoming rockets in Ashkelon. Photo by Uri Lenz/FLASH90

Booming missile fire and wailing air-raid sirens are the “lullabies” reaching the tender ears of newborns at Ashkelon’s Barzilai University Medical Center these days. Rockets are falling on the Ashkelon area at a furious pace, up to 200 every day.

“We hear bombs all the time,” says Dr. Shmuel Zangan, head of pediatrics and neonatology at Barzilai, speaking to ISRAEL21c on Monday morning moments after yet another bombardment.

The infants are out of harm’s way, in the hospital’s protected rooms.

Zangan says the newborn nursery and neonatal intensive care unit (NICU) have been moved seven times since 2006 in response to intensified bombardments from Hamas terrorists in Gaza. The most recent transfer took place on July 8.

Zangan explains that transporting fragile newborns carries great risk for brain injury, so the decision is not taken lightly. Furthermore, because Barzilai has limited sheltered spaces, he is forced to discharge many newborns earlier than he normally would.

“Our hospital serves more than half a million civilians, and we do 4,500 deliveries per year,” he says.

Like in any other modern hospital, about 10 percent of newborns at Barzilai arrive prematurely. The medical center has a 22-bed NICU and a 40-bed newborn nursery. Only a fraction of these babies can be accommodated in the protected rooms.

“As a result, the capacity for treating babies here has shrunk 40-50%. In order to be able to treat those babies who really need it, I have to discharge preterm babies a few days early, and full-term babies after 36 hours,” says Zangan.

“The other problem is that the remaining babies are very crowded in the sheltered areas and that’s a risk factor for cross infection. We urgently need more sheltered spaces, and we’re working on that.”

He points out that in Gaza, just seven miles from Ashkelon, hospital shelters are expropriated by Hamas operatives for their own safety.

“While we are doing all we can to use our shelters to give life, we know our neighbors are using shelters to protect leaders of Hamas,” says Zangan. “If you want to figure out who are the good guys and who are the bad guys, look at how they use their sheltered areas in hospitals. That is the litmus test.”

Preemies in the bomb shelter

On the morning he spoke with ISRAEL21c, Zangan’s staff was caring for a full complement of 15 preterm babies and about 25 full-term babies. Among them were two-day-old twins born nine weeks prematurely, one weighing 1,100 grams (about 2.4 pounds) and the other 1,300 grams (2.8 pounds).

“The smaller twin had to be medicated and intubated because his lungs were immature, and luckily he is now doing much better and I hope he can be extubated within a couple of hours,” says Zangan, recalling that in 2010, two Gazan preemies were being treated in the protected NICU along with the Israeli babies.

The NICU is staffed with five senior neonatologists, two pediatricians and 30 nurses; the nursery has two physicians and 20 nurses.

“I’m proud that our staff knows they are needed here to treat those preterm babies to give them the best chance to fulfill their potential,” says Zangan. “They do that with a lot of dedication despite their worries for their own families. When we have a siren, they find opportunities to call home and check on their children.”

He is relieved to know that the infants in the bomb shelter will not remember those first sounds of war. The effects on the adults are more long-lasting.

“Lots of research on small or preterm babies and morbidities during delivery proves that staying for a long time in stressful situations, like those among mothers in Sderot or Ashkelon, is a risk factor for prematurity and low birth rate,” says the neonatologist.

In several previous times of conflict, Barzilai directed many patients to hospitals farther north. Now, Barzilai is functioning normally due to the Iron Dome antimissile system in place near the medical center, and because the need is so great in its catchment area of Ashkelon, Ashdod, Kiryat Malachi, Kiryat Gat, Sderot and the smaller towns around Gaza. Nevertheless, the ground outside the hospital is strewn with shrapnel.

As of July 22, a total of 451 patients had come to Barzilai’s emergency department from the beginning of Operation Protective Edge, including 330 for minor injuries, 121 for acute anxiety and two dead on arrival. Of those, 32 patients (28 soldiers) were admitted for further observation and treatment, including a 17-year-old boy severely injured in a bombing attack from Gaza on July 13 and an injured Palestinian brought in by the Israeli army.