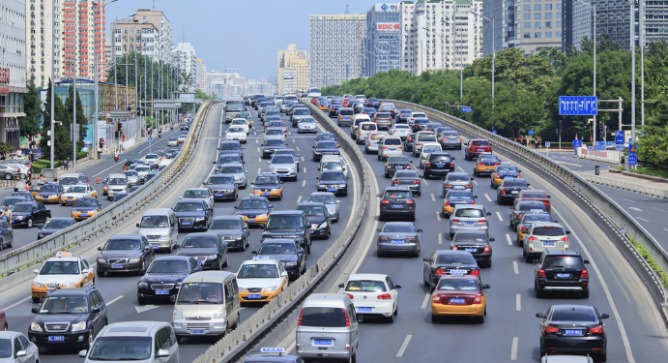 The roads could become a great deal safer thanks to new Israeli technology. Photo by TonyV3112 / Shutterstock.com.

For drivers, overtaking a truck is always a risk. Now, the latest craze of the auto technology arena, vehicle-to-vehicle (V2V) communication systems – or, cars that can “talk” to one another in real time – is promising to lessen that risk and heighten road safety.

Autotalks, founded and headquartered in Israel, has become a world leader in V2V as well as vehicle-to-infrastructure (V2I) technology, which enables, for example, traffic lights and other infrastructure to respond to an emergency vehicle’s needs.

In 2008, Israeli entrepreneurs Nir Sasson and Onn Haran founded Autotalks to fill a need in the automotive industry. They implemented a sophisticated wireless technology in a smart chipset that allows cars to exchange data.

In October, Autotalks will present its latest offering — the world’s first automotive-grade chipset ready for series-production for connected car models — at the auto industry’s big event, the ITS World Congress in Tokyo.

The technology analyzes data transmitted by the on-board processing units of nearby vehicles in order to warn drivers of any imminent danger and communicate with transportation infrastructure.

“This chipset is ready to be deployed in vehicles,” Autotalks director of marketing Daniel Campbell tells ISRAEL21c, explaining that car-to-car chipsets will be installed in certain high-end models by 2015.

After that, Campbell says, all car manufacturers will have to include V2V and V2I technology if they want to stay in the game.

Indeed, industrial research company IHS reports that more than 1.3 million cars worldwide will be outfitted with V2V-based systems within five years and that 30 percent of all new cars will come with them 10 years from now.

V2V and V2I systems address grim statistics: According to the World Health Organization, road traffic injuries caused an estimated 1.24 million deaths worldwide in the year 2010. Eurostat reports that transport accidents remain the largest single cause of death among people aged 15 to 29 in the European Union. In the United States, an average of six million car accidents occur every year.

“We’re all working for a safer road; car accidents influence us all,” says Campbell. “We see the importance [of the technology]. It’s really a big power that is driving the industry and we’re proud to be part of it.”

But road hazards are not the only threats addressed by the revolution at hand. 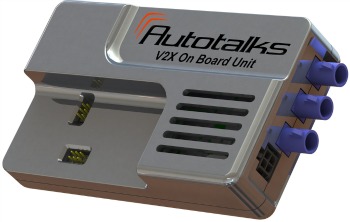 The Autotalks unit could become a standard feature of every new car.

Autotalks claims the chipsets that power its system — a communications processor named CRATON and a radio frequency transceiver named PLUTON — are secure and hacker-proof. Its built-in security solution authenticates and processes every incoming packet received by a vehicle in less than a millisecond.

“One of our key messages is we’re not only providing the first chipset but the most secure chipset available,” says Campbell. “Our background is from telecommunications, so we understand privacy and security. We take the most extreme efforts to make sure system is secured.”

From ABS to V2V

Campbell likens auto technology’s expansion into vehicle communication to that of the anti-lock braking system (ABS), which gradually transferred braking control from the driver to the vehicle as the technology evolved.

And, just as ABS took time to become an industry safety standard for new cars, V2V mostly likely will take a few years until the automotive market considers it customary, Campbell says. But he predicts this new communication system will become the norm.

“Would you think about purchasing a car without ABS? That’s the same evolution in safety application with V2V and V2I,” he says.

While Israel does not have an automotive industry of its own, Campbell says it does have credible and sought-after expertise in automotive technologies. Just look at the success of Mobile Eye, Jerusalem-based maker of a chip- and camera-based technology that helps drivers avoid a collision.

“The automotive community appreciates Israeli expertise. Different car manufacturers are coming to Israel to find a new technology,” he says. “Israelis have the ability to take a concept and technology from a different domain and bring the expertise to a new domain.”

Søren Hess, general manager of the CAR 2 CAR Communication Consortium, says, “We consider Autotalks Automotive Grade V2X chipset availability to be an indication of the major progress the industry has made. Vehicle manufactures and Tier 1s are now able to design series-production modules and apply the relevant applications.”

UNCOVER ISRAEL - Get the ISRAEL21c
Weekly Edition free by email
Sign Up Now!
Bring Israel's story to life.
Millions of people around the world rely on us to gain a deeper understanding of Israel. We are the trusted source for original content you won't find anywhere else.
You can make a difference. Donate today to support journalism that brings Israel’s story alive.
SUPPORT ISRAEL21c
Read more on:   Innovation, Technology, road safety, Autotalks, automotive industry