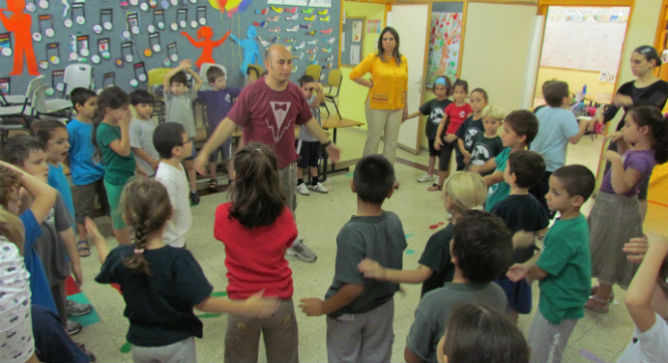 “This school has been incredible,” says Alana Goldstein, whose autistic fourth-grader recently won second place at a peer-judged “A Star is Born” talent show at Yad Hamoreh. “These are low-functioning kids with behaviors that are not easy to deal with. And the regular children actually grow up with them. They learn to see the autistic children as part of their society.”

Yad Hamoreh (“Teacher’s Hand”) is a one-of-a-kind Jerusalem public elementary school. Founded in 1998, today it integrates 187 normal first- through sixth-graders with 49 severely to moderately autistic peers. Mostly separated for academics, the kids do everything else together, from eating to swimming. Regular kids even join in therapy sessions involving games, sports, music, animal care and horticulture.

Because hers is a model school with no exact counterpart anywhere, Principal Ana Goren often hosts visiting educators from other Israeli municipalities as well as Eastern European countries, South America, China and the United States.

Zvi Shamir, uncle of an autistic niece and father of three normal daughters who have all attended Yad Hamoreh, explains that the first- through sixth-grade school was a parent-led initiative.

“It was based on a system developed by a kindergarten nearby that merged regular and autistic children,” Shamir tells ISRAEL21c. “This is a unique experiment in the world, we believe.”

Judging by the enthusiasm of his second-grader, Lia, the experiment is a success. “What do you like about your school?” ISRAEL21c asks, and Lia Shamir breaks into a grin. “Everything,” she says.

Goldstein’s son cannot verbalize quite as well, yet his mom can tell he’s happy and she gets daily written reports from his teachers.

“When our son was in his last year of [special] kindergarten, this was the only offer we had for him,” she says. “We were assured it would be the best place for him.”

The Education Ministry handles placement for the autistic children at Yad Hamoreh. Normal children, however, must apply for acceptance, and demand exceeds availability. You might not think parents would want their children exposed to the sometimes scary screeching and head-banging behaviors severely autistic children may display. But Goren’s behavior-modification approach appears to work wonders.

“Having regular children around makes the autistic children more aware,” says Goldstein. “The regular children also gain because they have so many unusual things going on here. The facilities are like what you’d expect in a private school.”

It’s not magic, stresses Su Narodowski, an educational instructor who works with special-ed teachers, pupils and parents at Yad Hamoreh.

“It doesn’t work easily or without hiccups. Our teachers have to be very flexible. The regular and special-ed teachers have to think of activities that allow both populations to participate, and behind that is a belief that this is worth fighting for.”

Shamir says that his girls learned respect and tolerance not only for kids with autism but also for people with a range of differences. The school includes religious and secular, Jewish and Arab pupils along with a multi-ethnic staff of administrators, teachers, therapists and community and National Service volunteers.

“It’s monumental that kids who leave this school have a value system, a social understanding, that is not an innate expectation,” Narodowski tells ISRAEL21c.

“At first they may be a bit wary of this kid who’s wiggling his fingers and making weird noises. Then suddenly they realize, ‘I want to go on stage and hold his hand.’ When you grow day by day with someone for six years, you learn to see very clearly what a person is made of.”

A community that benefits families

Shamir explains that the social modeling provided at Yad Hamoreh leads to remarkable achievements for the special kids.

“When [autistic children] learn with regular children, they have to adopt the modes of behavior of the regular society,” Shamir says. “Based upon research at the Hebrew University, we have the basis for our assumption that these children reach much, much higher levels of participation in society.”

Yad Hamoreh parents and siblings are welcome at school trips and events. “One of the main problems for autistic children’s families is their participation as a unit in the community,” says Shamir. “The community created by this school is very good for both kinds of families.”

The past two summers, Goldstein was pleasantly surprised when both autistic and regular classmates came to her son’s birthday parties. “Even though it was in the middle of the summer, more than half the regular children came,” she reports.

Inclusive extracurricular activities are critical to the school’s culture. A student choir of 43 kids includes four autistic children. When regular fifth-graders go for mandatory swimming lessons, their autistic classmates come along, although they have their own weekly hydrotherapy sessions. Narodowski says it took some persuasion for the Education Ministry to allow such an arrangement.

With everything going on at Yad Hamoreh, its school day is longer by two hours than most other Israeli public schools. But Lia Shamir doesn’t mind at all.

“What do you wish will happen today at school?” ISRAEL21c asks the second-grader. “That the day won’t finish,” she replies with a giggle.

Click here for details Increasing affinity, understanding and joy for Israel through education Click here for details
Bring Israel's story to life.
Millions of people around the world rely on us to gain a deeper understanding of Israel. We are the trusted source for original content you won't find anywhere else.
You can make a difference. Donate today to support journalism that brings Israel’s story alive.
SUPPORT ISRAEL21c
Read more on:   Activism, Education, Autism, Social Action, Back to school