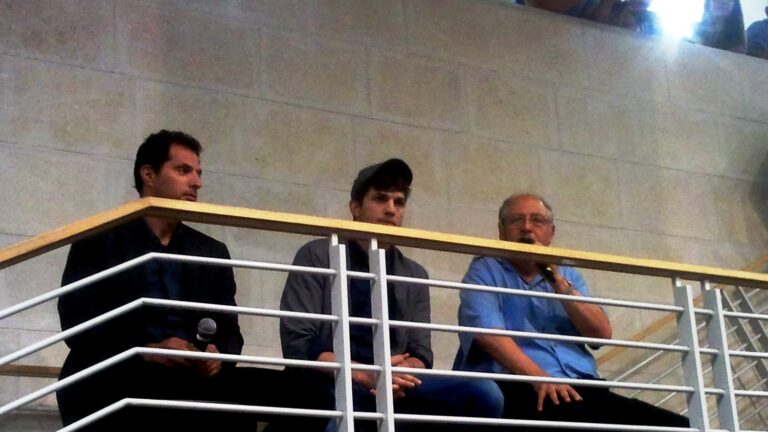 American actor Ashton Kutcher and his investment partner, Guy Oseary, a producer in the US music industry and Madonna’s personal manager, stole the spotlight at the GarageGeeks gathering in Tel Aviv last night. Yossi Vardi, unofficial ambassador of the Israeli high-tech scene, hosted Kutcher and Oseary as part of a “Meet the Industry Leaders” event.

Kutcher, on his fifth visit to Israel, came to find “interesting entrepreneurs.”

Vardi asked Kutcher – one of Hollywood’s most successful high-tech investors – what he looks for when choosing a startup in which to invest.

Kutcher said that just as in a movie he looks for a good story and a creative director, the same is true for a startup – that he wants entrepreneurs with originality and a good social connection with people.

Kutcher will also visit the Kabbalah Center during the Shavuot holiday.

UNCOVER ISRAEL - Get the ISRAEL21c
Weekly Edition free by email
Sign Up Now!
Bring Israel's story to life.
Millions of people around the world rely on us to gain a deeper understanding of Israel. We are the trusted source for original content you won't find anywhere else.
You can make a difference. Donate today to support journalism that brings Israel’s story alive.
SUPPORT ISRAEL21c
Read more on:   News, high-tech, Ashton Kutcher, Kabbalah, Yossi Vardi, Guy Oseary