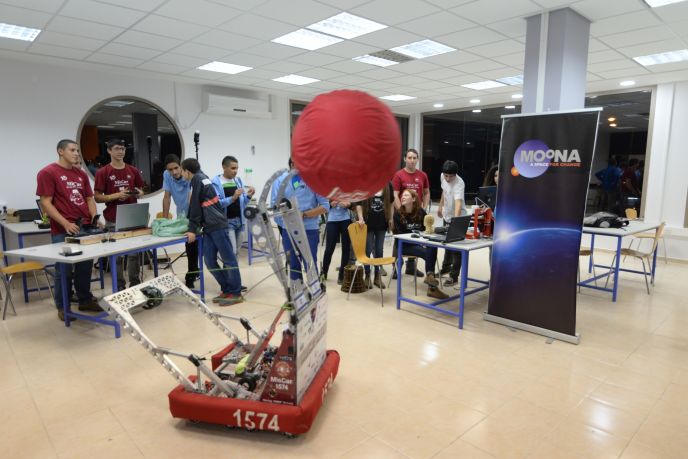 Moona courses attract an equal number of Arab and Jewish teens in the Galilee.

Moona courses attract an equal number of Arab and Jewish teens in the Galilee.

Asaf Brimer spent 25 years in the Israeli air force and aerospace sector before an idea came into his mind like a shooting star across the horizon: He would bring Israeli Arab and Jewish students together through a collaborative research center focused on outer space.

Moona — a Space for Change officially opened in September last year in Majd Al-Kurum, a Muslim village 10 miles east of Acre (Akko) in the Western Galilee.

So far, it has attracted about 100 high school students – roughly a 50-50 split between Jewish and Muslim teens – for weekly courses in robotics, drones, 3D printing, electronics and other technologies related to outer-space exploration. Families from the area also are welcome at Moona.

“Moona” means “wish” in Arabic and sounds like “moon” in English, while in Hebrew “emoona” means “faith.”

Brimer tells ISRAEL21c that he and his founding partner, Hussein Tarabeih, the Muslim head of Towns Association for Environmental Quality, wanted to connect Arab and Jewish citizens of the Galilee to one another and to the academic institutions and businesses of the region.

“I started it because the separation in our society is the biggest challenge for Israel, and I decided that my children will be better off if society is more open,” he says. “We lose a lot of advantages because we don’t have opportunities to meet each other, and [Arab children] have few opportunities in high-tech.”

These goals meshed with those of Israeli industrialist and philanthropist Stef Wertheimer, who has initiated several projects to enhance the job prospects of Arab-Israeli citizens of the Galilee, such as the Nazareth Industrial Park established in 2010.

Wertheimer provided both funds and equipment for Moona, and his son Oren heads its board of directors, which is also evenly split between Arabs and Jews. Additional investment came from a crowdfunding campaign, private individuals and foundations, the Israeli government and the Galilee municipalities of Karmiel and Misgav.

Bolden was in Israel in January 2013 for the 10th commemoration of the Space Shuttle Columbia tragedy that took the life of Israeli astronaut Ilan Ramon. Brimer had been in touch with friends at NASA to announce his intention to open a technology hub “that is going to change society,” and word made its way up to Bolden.

As soon as Brimer confirmed that Bolden was planning to come to the Galilee to meet with teens involved in the planning of Moona, he arranged for the students to stage a science fair in the town of Sakhnin for the NASA visitors.

During Bolden’s visit he encouraged the teens to let go of historical enmity and work together on space research just as the United States and Russia managed to do. “At one time, the United States and the Soviet Union were the bitterest of enemies,” he told them. “But we’ve got to be willing to forgive people. And that’s hard work.”

Things that need to get done

Brimer and Tarabeih don’t like to dwell on the bicultural aspect of Moona.

“We don’t need to talk about Arabs and Jews; we’re just doing things that need to get done,” says Brimer. “And we are welcomed because the need is big.” 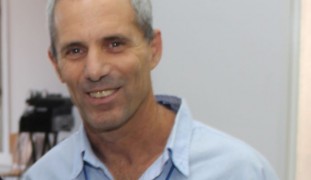 He explains that they chose to focus on outer space because they believe the combination of exploration and technology is attractive to many teens. And they hope it will stimulate interest in higher education in the sciences among women, especially those from Arab families in the area Moona serves.

“I see myself wearing that white lab coat, doing research and doing things that females couldn’t do before,” says Arab-Israeli participant Shada Miari on a promotional video for the innovation lab.

The project also has the backing of SpaceIL, a national movement of volunteers, academics, business leaders and industry experts working toward landing an Israeli satellite on the moon and raising the level of technology education in Israeli schools.

“I welcome and support Moona’s establishment with great enthusiasm,” said SpaceIL Chairman Yanki Margalit. “There is a real shortage in technology education and a thriving high-tech industry in the northern Galilee region. In the near future, SpaceIL will collaborate with Moona and utilize the new lab for our collaborative educational programs. Their success is our success, in realizing SpaceIL’s educational vision.”

In Brimer’s vision, there are no divisions between peoples. “From outer space, everyone looks the same,” he says.