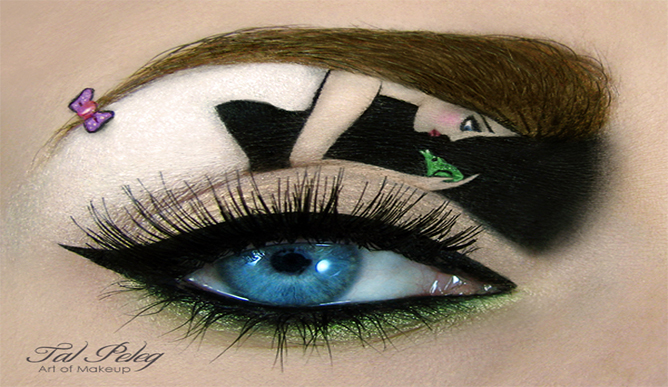 The Princess and the Frog artfully makes use of the eyebrow.

The eye has long been a recurring motif in art, from Edvard Munch, Rene Magritte and Leonardo da Vinci’s famous paintings featuring the eye to the popular eye-portraits of late 18th century Great Britain.

Today, eye art has a totally new meaning thanks to an Israeli makeup artist from Kfar Hayarok, just outside Tel Aviv. 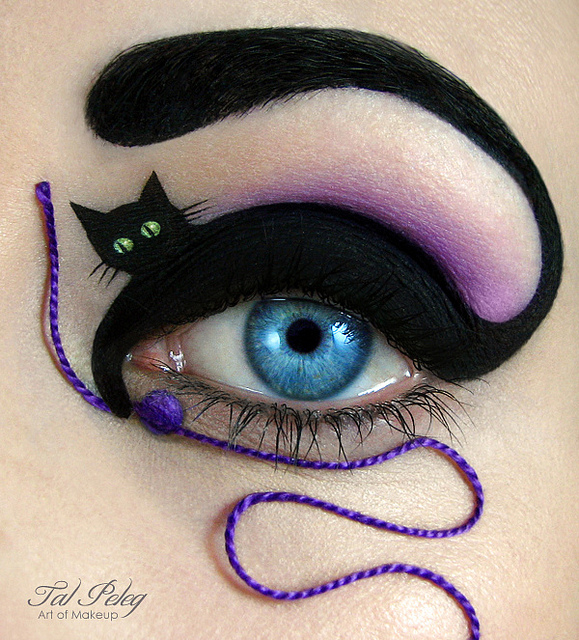 When Katy Perry tweeted this design, it really got the ball rolling.

Of course, Tal Peleg had no idea that her miniature drawings would trigger a new worldwide movement that is gaining momentum.

She started using her eyes as a canvas on a whim, nearly three years ago, and launched a blog on which to upload her amazing designs. Feedback was positive, so she also opened a Facebook page — but only in Hebrew because, as she says, “I had no idea my art would go viral.”

Boy, was she ever off the mark. Type “eye art” into any search engine and Peleg’s name will pop up near the top. 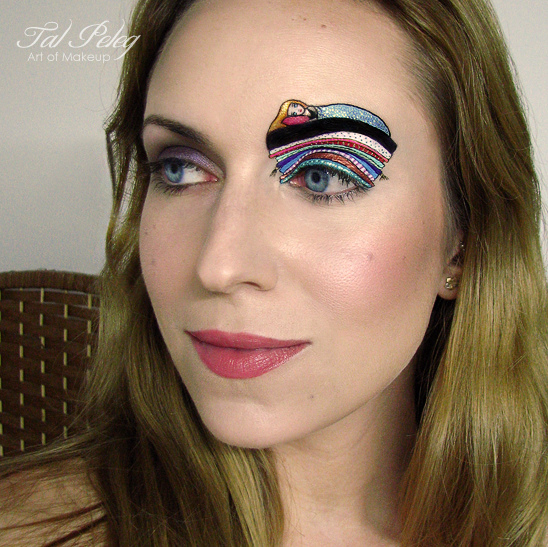 Tal Peleg models her Princess and the Pea design.

Her portfolio is extraordinary: intricate pictures from fairy tales, great novels, television shows and movies including Cinderella, Snow White, The Princess and the Frog, Frozen and even Breaking Bad — all painted with makeup.

It was American singer Katy Perry who set Peleg on the path to become the online superstar of modern eye art.

“The viral craze started in August 2013 after Katy Perry put my cat-with-a-ball-of-yarn drawing on her Twitter feed,” Peleg tells ISRAEL21c. “I had no idea it would get to these kinds of levels.”

The domino effect from that tweet was immediate. International fashion and style magazine editors still contact Peleg daily about her masterful eye works.

“We’ve pretty much run out of superlatives for Tal’s designs,” Glamour magazine states at the end of an 18-photo spread dedicated to Peleg’s “crazy artistic and super clever” designs. She has been dubbed a pioneer of the latest eye art discipline. Just don’t compare it to the nail art trend.

“I don’t see it as a trend. It’s not practical, it’s not a fashion like skinny jeans is a trend. This is art,” Peleg tells ISRAEL21c. “I hope it’s something that will continue to evolve and open up to a wider audience.”

The 28-year-old with a super steady hand has a degree in visual communications from the Minshar Art School and a diploma from the Yarin Shahaf Professional Make-Up School, both in Tel Aviv. 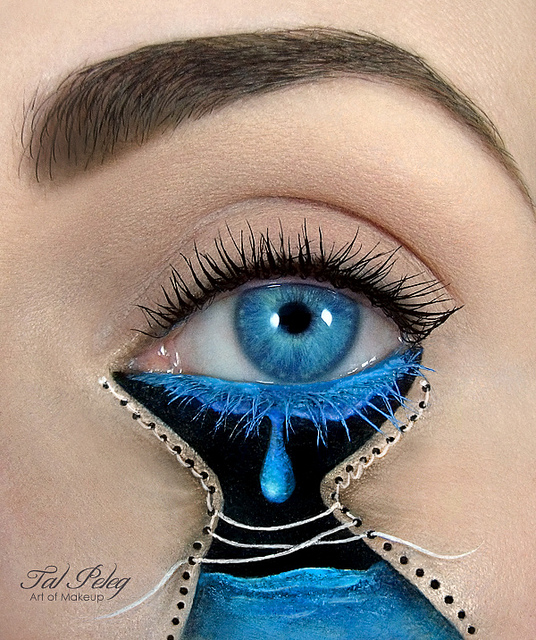 “Land of Tears” was inspired by a passage from The Little Prince.

“One of the reactions I sometimes get is, ‘What’s it good for?’ I see this as a stupid question. It’s like asking ‘Why do art?’ It’s not for wearing. It’s art. Eye art,” she says.

“The eye is … said to be the window to the soul,” she says. “I don’t just draw on top of the eye. I use the shape of the eye. That’s part of the challenge.”

Peleg says an idea can pop into her head at any time and that she’ll usually sketch something on paper before setting to work on her eyes. 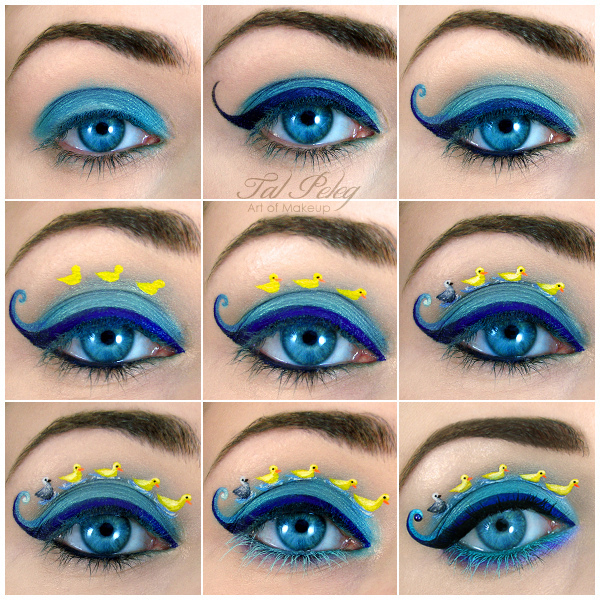 Her sushi food art was hugely successful on Instagram (“It’s my favorite food; it was an obvious choice,” she says.); while her Anne Frank drawing raised eyebrows (“It just came to me.”). The famous Katy Perry cat took her just over an hour, she says, and the most recent Hansel & Gretel house took nearly four hours because of its “intricacies and fine details.”

The oldest of four, Peleg says her sisters – especially the two still in high school – keep her up to date on her social media status. “My sisters follow how many followers I have. They’re very excited and their friends at school also help count,” says the married Peleg, who has a 31,000-strong Facebook community and a 27,000-plus Instagram following so far.

She makes a living as a professional makeup artist and designer and dedicates just one day a week to her eye art.

Despite the huge interest online, Peleg says she doesn’t have a sponsor and funds her eye art out of pocket. 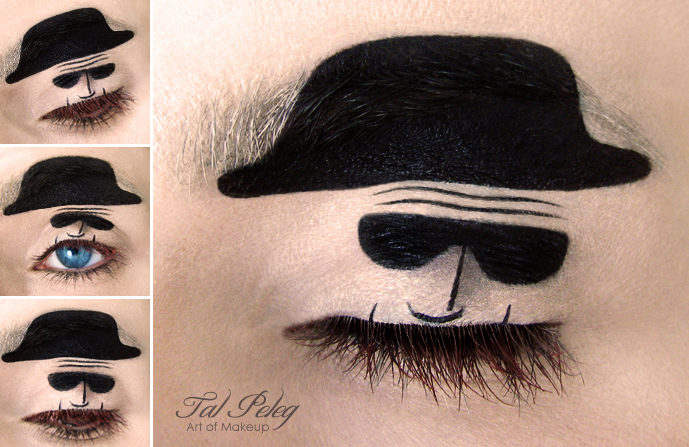 Peleg was inspired by Breaking Bad to do this design.

“I give makeup tutorials for conventional makeup,” she says. “I’m not sure how to teach the eye art technique. You need talent in illustration and it’s not something I can teach in a few hours. Maybe if I find a way to teach it I will.”