In record time, Israeli engineers and medical specialists erected a state-of-the art ER in Kisumu, Kenya, the first such facility in a region of six million. 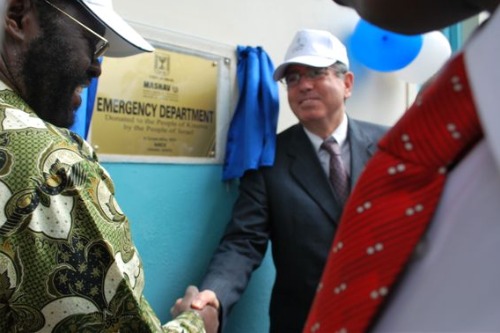 MASHAV Director Haim Divon (in white baseball cap) at the ceremony marking the opening of a new ER facility built by Israel in Kisumu, Kenya.

US President Barack Obama’s father was born in a village that lies about 25 miles from Kenya’s third-largest city, Kisumu. MASHAV, Israel’s Agency for International Development, was helping to improve life there even before the president was born.

“Kisumu is our number one partner city in the world,” states MASHAV director Haim Divon, who recently returned from the inauguration of an Israeli-built Emergency Room (ER) at Kisumu East District Hospital.

This state-of-the-art facility, put together in less than a month by a team of Israeli engineers and medical specialists, is the hospital’s first fully-equipped ER. It will be a center for both regional emergency treatment and professional training.

“There is no other such facility in a region of six million people,” Divon tells ISRAEL21c, noting that he has traveled to the East African republic many times on behalf of MASHAV. The agency invested about a quarter of a million dollars in the project and is committed to provide ongoing support and capacity building.

Israel and Kenya have enjoyed close ties since the 1950s, when a fledgling MASHAV set up ophthalmology “camps” there to treat patients with eye diseases. “We have a special sentiment for Kenya because it was one of the first countries we established diplomatic relations with,” he recalls. The East African country of 40 million has a sizeable Jewish community and is also a popular tourist destination for Israelis.

“We are always asking ourselves where we can be relevant and effective, given our modest budget,” Divon continues, “Where do we have the expertise in areas relevant to the challenges they face?”

When Israel Foreign Minister Avigdor Lieberman visited last year, he learned of the need to upgrade services at the district hospital. He asked MASHAV’s medical adviser, Dr. Yossi Baratz, who served as the agency’s representative in Kenya from 2003 to 2006, to study the situation. Baratz decided to begin with an ER and emergency medical training.

Divon says that MASHAV may next help to train emergency medical responders at the request of the Kenyan minister of health, who was impressed with Israel’s Magen David Adom nationwide emergency response organization during a recent visit. “In Kenya, they don’t have adequate medical knowledge or facilities to treat victims on the scene, so ambulances are mainly just for transport. In our system, the ambulance squad is already administering emergency care and this is a concept they want to adopt,” Divon elaborates.

MASHAV’s efforts in Kenya are focused mainly on food security, health, education and empowerment of women. Divon says these programs earn Israel great respect and appreciation from the Kenyan people and elected officials.

One recent project involves setting up strategic planning strategies for municipalities including Kisumu. “It’s not sufficient to have good policies coming from the capital if the municipalities don’t have the capacities to implement the programs,” explains Divon. The planning model could later be introduced to other cities along picturesque Lake Victoria, he adds, not only in Kenya but also in neighboring Uganda and Tanzania.

Divon notes that Germany’s national aid agency participates in several joint programs with MASHAV in Ethiopia and Ghana, and is interested in helping to expand the new ER in Kisumu from its initial capacity of about a dozen beds. His German counterpart has expressed his intention to build an intensive care or neonatal unit at the hospital as well. Such projects go a long way toward providing basic health services in a country that does not have an adequate number of physicians or healthcare facilities for its citizens.