At the new ice cream parlor in Tarshiha, the common language is the sound of a lick. With a mixed clientele of Muslims, Christians and Jews from Israel and abroad, visitors will hear Hebrew, Arabic, English and a smattering of other languages being spoken between licks.

Adam Ziv and Alaa Sawitat opened Bouza (“ice cream” in Arabic) last July and have attracted a steady stream of clientele curious about this partnership between an Arab Muslim and a Jewish kibbutznik in the Tarshiha shuk (marketplace), which is not usually associated with swanky ice cream stores. What also helps business is that the nearest homemade ice cream shop in the Western Galilee is 16 kilometers away.

But it’s the taste that brings customers back, says Ziv.

“We’re not just a novelty of being a Muslim-Jewish coexistence ice cream store,” Ziv tells ISRAEL21c. “We make ice cream that people like.”

Bouza’s customers range from schoolchildren (who pay the equivalent of just $1.25 if they come in school uniform) to grandparents. Ice cream is served by portion size and not by the scoop, with prices ranging between $2.35 and $4.50.

In 1963, the city of Ma’alot-Tarshiha came about through a municipal merger of the Arab town of Tarshiha and the Jewish town of Ma’alot. The artificial Lake Monfort, to the east of the city, as well as an annual international sculpture symposium, had been the two main attractions for tourists to the area. 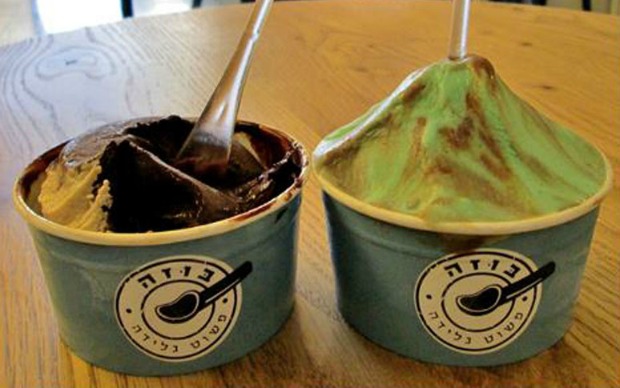 Ice cream in a cup at Bouza.

And then in the last year, fashionable pubs and eateries started to open in the quiet Muslim-Christian side of the town.

For Ziv, the new beat of Tarshiha was perfect.

The 27-year-old Kibbutz Sasa resident, who belongs to a local band and performs with friends at small bars around the country, had just returned to Israel from a year-long trip around Europe and Africa. During his travels, Ziv apprenticed at gelaterias in Italy and ice cream shops in the Canary Islands.

Upon his return, Ziv asked longtime family friend Sawitat, a co-owner of one of the Galilee’s top bistros, for help finding a place to open a store. Together they chose Sawitat’s hometown of Tarshiha – and also joined forces. Ziv is in charge of making the ice cream. Sawitat handles the financial side of the business. 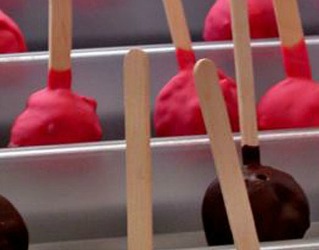 Treats on a stick.

“From the moment I thought of opening an ice cream parlor, I looked for a place near Kibbutz Sasa that would also be cool,” Ziv told Hazman Hayarok newspaper. “I thought it would be amazing to build a business that is co-run by Jews and Arabs, a place where Jews and Arabs would come. … The other day we looked outside and saw people from a Jewish village in the Galilee sitting beside a group of Arab youths from Tarshiha. A friend of mine looked at me and said, ‘So, this is the new Middle East.'”

Ice cream stores in Israel tend to offer up eccentric combinations. Hummus ice cream was last summer’s big hit, with gelaterias around the country mashing chickpeas into sugar and cream.

Bouza’s ingredients are a mix of local produce and Italian imports such as nut pastes and dark chocolate.

“People can designate our ice cream with whatever style they want,” says Ziv. “The technique is Italian but I don’t like to call it Italian ice cream. Our ice cream is influenced by the whole Galilee region.” 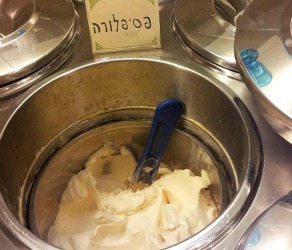 Ziv makes use of his marketplace location. On Saturday mornings he buys fresh ingredients from local farmers. He then employs older Tarshiha women, looking for added income, to help him prepare the fruits for his ice cream.

“Anything with nuts – hazelnuts, pine nuts, pistachio – these are our big sellers,” says Ziv. “We try some Middle Eastern mixes like pomegranate and lemongrass or chocolate and spearmint. We’re still working on a kanafeh [sweet Palestinian cheese pastry] flavored ice cream but haven’t found the right recipe yet. I don’t want to be too pretentious when making new flavors. Our motto is ‘simply ice cream’ – and that’s what we do. We make great ice cream for our customers.”

At the end of the day, Ziv says he is just trying to satisfy customers and hopes “they’ll remember the way back to Bouza.”