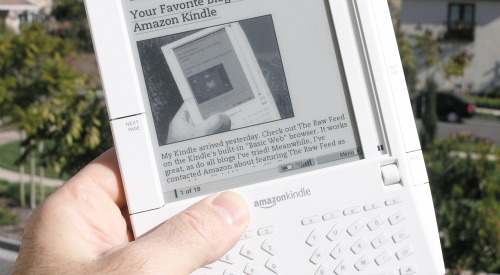 It’s a surprise to many, but Amazon’s Kindle, one of the hottest up-and-coming gadgets was largely developed in Israel.

Windows; ICQ (known today as AOL Chat); anti-virus software; cell phone technology – you name it and Israel has had a hand in the development, if not the outright invention, of many of the most important tech components of modern life. And Israel’s high-tech brain trust is still brimful of ideas. This may come as a surprise, but one of today’s newest, hottest, up-and-coming gadgets, Amazon’s Kindle, was largely developed in the heart of Israel’s high-tech center in the Herzliya Industrial Zone on the central coast.

“Four years ago, Amazon contacted Sun (which was acquired by Oracle last year) in California and said they wanted a small device that could be used to read e-books,” says Lilach Zipory, the leader of the team that helped to develop the Kindle application. “They had already acquired the software to run it, but were looking for the right technical design, and especially a platform to run the software on. My team in Herzliya is in charge of developing Java for small non-cell phone devices, so they gave us the project.” And the rest, of course, is history.

It’s a history that wasn’t well known until recently, since Oracle chose not to reveal too much about its role in the development of the Kindle. Now, however, the company has come clean – and in the process, Zipory’s team is receiving some much-deserved credit.

Israel gets credit for Kindle performance

Not that the team was aware of the far-reaching implications of the project when they took it on. “We see a lot of small devices here, and they’re all very nice. But I would never have expected an e-book reader to take off like the Kindle did,” she confides to ISRAEL21c.

Four years ago, Lilach Zipory’s team was approached to develop a Java platform for e-book software.

Perhaps that’s because the Kindle was not the first e-book reader, and as a technical expert, Zipory may not have realized the extent of Amazon’s willingness to invest in marketing the device. Still, the Kindle would not have succeeded as it did if it wasn’t such a top-functioning, high-performer. And the credit for that performance success is based on the customized Java platform written in Israel by the Herzliya team.

Zipory’s group has worked on a wide range of devices, from industrial valves to set-top boxes, so they took the Kindle development in stride. One of the main goals was to develop a version of Java that would support the Kindle’s electronic ink, one of the device’s greatest charms, says Eran Vanounou, director of the Oracle development office in Herzliya.

“We were impressed with the business model for the device and the e-ink technology, and we decided to develop a version of Java to specifically support the Kindle,” he says. A flexible platform, Java supports devices of all sorts, including most of the world’s cell phones, PC software, printers, industrial equipment and much more.

Most devices use “off-the-shelf” versions of Java, with programmers applying the components needed to run the device they are supporting, but in the case of the Kindle, several deeper, driver-level adjustments were needed, Zipory says.

“We had to adjust the refresh rate of the operating system software to accommodate grayscale screens, which require more unique refreshing methodology than the normal color screens that most devices use today, and which the most up-to-date versions of Java are designed to support.”

The Herzliya team worked with Amazon for several years on developing a prototype, and when they were satisfied, manufacturing commenced. “They initially ordered 100,000 pieces, and we were frankly skeptical they would sell all of them,” Vanounou says. “But when they sold out a couple of months later, we realized what we were involved with.”

The success of the Kindle has of course been a source of pride for the Herzliya team – and a boon for Oracle whose Java, first developed by Sun, and now proudly bearing the Oracle brand name – has seen its status rise among developers. “Of course Java was well-known before,” says Vanounou. “But the Kindle gives us something new to show potential customers who are looking for an easy-to-use and develop platform. It’s made Java cool all over again.”

Now when they travel, Vanounou and Zipory proudly look on as passengers on planes pull out their Kindles and start reading. “As a platform technology, Java runs in the background, and it powers many important devices,” Vanounou says. “We know there are many devices out there using our technology. Each device we develop and each partnership brings new successes, and new connections based on those successes. But the Kindle is different, because it’s such a phenomenon.

“I was recently on a flight when a woman told me how her Kindle kept her entertained while she flew,” says Vanounou. “I didn’t let on how much we in Oracle Herzliya were a part of her experience. But when she said ‘I love my Kindle,'” says Vanounou, “I could have sworn I felt a tear in my eye.”

UNCOVER ISRAEL - Get the ISRAEL21c
Weekly Edition free by email
Sign Up Now!
Bring Israel's story to life.
Millions of people around the world rely on us to gain a deeper understanding of Israel. We are the trusted source for original content you won't find anywhere else.
You can make a difference. Donate today to support journalism that brings Israel’s story alive.
SUPPORT ISRAEL21c
Read more on:   Technology, Israeli innovation, Amazon Kindle