For the first time, an Israeli professor has been awarded the Fields Medal for Mathematics, said to be the equivalent of a Nobel Prize, by the International Mathematical Union.

Prof. Elon Lindenstrauss of the Einstein Institute of Mathematics at the Hebrew University of Jerusalem has become the first Israeli to receive the Fields Medal. Regarded as the equivalent of a Nobel Prize in mathematics, the award was bestowed on Lindenstrauss and three others by Indian President Shrimati Pratibha Devisingh Patil at the quadrennial International Mathematical Union in Hyderabad on August 19.

Speaking to ISRAEL21c from India the following day, the tired but elated mathematician says he still has much to accomplish professionally, when he and his wife and three young daughters return from the festivities.

What catapulted Lindenstrauss into the international spotlight are his advances in ergodic theory, the statistical and qualitative behavior of measurable actions on measurable spaces. His work has led to solutions to some of the most complex problems in number theory, which deals with the properties of numbers.

For the past 10 years he has been making strides in understanding the Littlewood Conjecture, a well-known ‘open problem’ first posed around 1930 by British mathematician John Edensor Littlewood. “I am making progress, but I still don’t know how to show definitively that these things are true,” says the Israeli professor. He explains that while his findings often have practical applications, some are “just pure mathematics. You never know which part of mathematics will be useful.”

The Fields Prize, established by University of Toronto mathematician John C. Fields in 1932, is awarded every four years in conjunction with the International Congress of Mathematicians’ International Mathematical Union. With a cash prize of 15,000 Canadian dollars ($14,460 or 54,760 shekels), it recognizes significant achievements as well as promising potential in mathematicians up to the age of 40.

Lindenstrauss, who just celebrated his 40th birthday, is a Jerusalem native and graduate of the Talpiot program for outstanding students in the Israel Air Force. He began winning awards even before finishing his education – including the Nessyahu and Kennedy-Lee prizes for his Ph.D. thesis in mathematics – and has gone on to garner additional honors from professional associations in Europe and Israel, including the Israel Defense Prize.

Calling Lindenstrauss an “Israeli cultural hero,” Hebrew University President Prof. Menahem Ben-Sasson pointed out that the Fields age limit presents a particularly difficult challenge for Israelis, because they are not free to begin their academic careers until after they have fulfilled their military obligations. Lindenstrauss, who has published 35 papers since 1995, started even later than usual, because he volunteered for extra service. 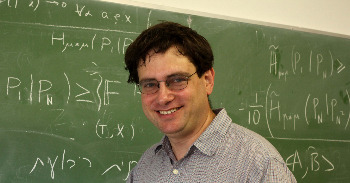 Israel’s Prof. Elon Lindenstrauss, winner of the Fields Medal for Mathematics (known as the “Nobel Prize” for mathematics) in the classroom at the Hebrew University.

Although no Israeli has won the medal before, Israeli mathematicians figure prominently in the Intentional Mathematical Union, whose membership is determined on the basis of the quality and quantity of research by individuals. “Israel is one of the 10 largest and leading state delegations represented in the organization,” says Einstein Institute Prof. Alex Lubotzky in a statement released just after the prizewinners were announced.

Lindenstrauss says that his father, Einstein Institute professor emeritus and Israel Prize laureate Joram Lindenstrauss, was “extremely happy” to hear the good news. Family is the primary reason Lindenstrauss cites for his decision to pursue his career at the Hebrew University rather than in the United States, where he has worked at the Institute for Advanced Study at Princeton, N.J., Stanford University in California, and the Courant Institute at New York University. He recently completed a five-year professorship at Princeton University.

“What made it easier is that there is a wonderful mathematical community in Israel, so I didn’t have to make any significant professional sacrifice to be here,” he says.

Several other members of the university’s Einstein Institute of Mathematics have received international renown since its founding in 1925. Among the most well-known is Prof. Robert J. Aumann, a game theorist who won the Nobel Prize for economics in 2005. Aumann is one of nine Israelis who have won Nobels; the most recent was Weizmann Institute chemist Ada E. Yonath in 2009.