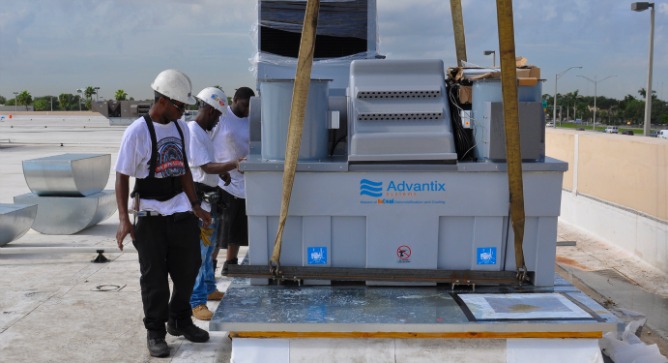 Advantix being installed at a client site.

When three Israeli brothers back from vacation decided to start a recreational ice-skating business in Israel, they came up against the obvious challenges of making ice float in the Middle East: heat, humidity and high energy bills.

Taking a slab of Dead Sea salt and inspired by the way the lowest place on earth sucks up water from the atmosphere, a new cooling idea was born.

Dan, Tom and Mordechai Forkosh, with their father and uncle, eventually went on to build 22 slush-free ice rinks in Israel and Europe using their patented energy-saving approach.

And since 2010, their company Advantix has been applying the same basic approach — using salt and a heat pump — to take a bite out of the industrial air-conditioning systems market around the world.

Hannah Choi Granade, US-based company president, tells ISRAEL21c: “The men were familiar with the concept of using salt as a liquid desiccant [moisture-attracting drying agent]. The science was out there but no one had tried it on the market.” 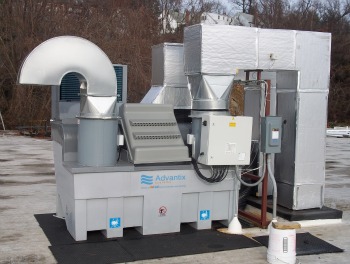 This is an Advantix rooftop unit.

It was then tried, tested and found true. While the thousand or so Advantix air conditioners installed today don’t contain the original Israeli Dead Sea salt –– they use an abundant lithium chloride salt instead –– Israeli ingenuity is very much crystallized in the new business.

Granade, an American, says: “The Dead Sea is actually a water-attracting material. People float higher at the Dead Sea because it is so incredibly salty ––and these extreme salt levels attract moisture from its surroundings.”

The Advantix systems work in the same way, with a regular compressor.

The company has a number of products but its DX system is basically an air conditioner that can be installed by a regular technician. Additional “green” software-linked solutions can improve energy savings further.

Whereas current technologies freeze surrounding air until it reaches a dew point, and then reheat the air to a comfortable temperature, this process makes for “clammy” air, with humidity up to 60 percent. This type of environment leads to mildew and mold buildup and interferes with the normal sweat response of people. It’s an especially difficult problem in gyms and in industrial processes requiring low humidity, such as pharmaceutical and food-packaging plants. 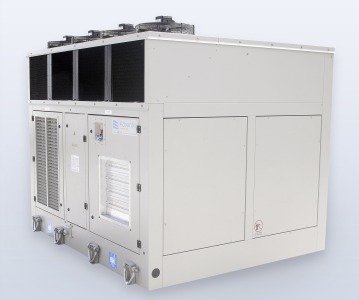 This is an Advantix rooftop unit.

The Advantix approach is new. Instead of drip coolers that create wastewater, a salt solution absorbs water from the air. When the solution gets too dilute, heat from the machine’s engine gets pumped back in to evaporate the excess water. Therefore, the process is constantly renewed inside the system.

“That’s what’s innovative in our invention: It uses captured heat and a warm salt solution to regenerate itself,” Granade says.

In most instances, cost savings are instant. In more extreme cases, where mold and mildew have become a problem, return on investment is about two years.

There are huge health advantages to tackling this all-too common issue.

“The salt solution captures bacteria and dries it out and stops it from spreading,” Granade says. “They call it the Dead Sea for a reason. Salt is a natural, non-toxic way to kill things.” 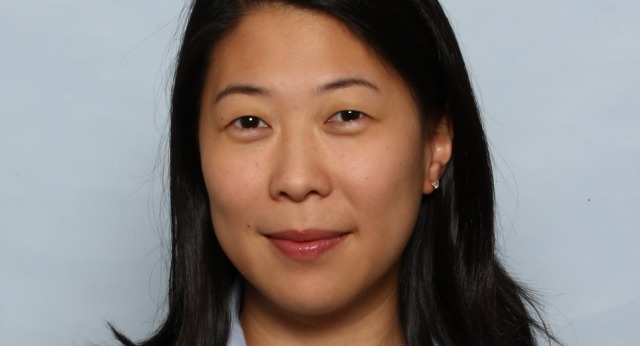 The result is cool and dry conditioned air –– a boon for germ-prone nursing homes, schools and hospitals. And because dry air feels cooler than humid air, Granade explains, the cooling effect can be accomplished at a higher temperature, thereby saving energy.

Typical customers are industrial and institutional. Manufacturers like Procter & Gamble, schools like Montessori, restaurants like Hooters, and hotels like Hilton are finding that Advantix offers across-the-board pluses beyond the 40 to 50 percent energy savings compared to traditional units.

Business is going well from the appropriately sourced location of Sunrise, Florida. The company has offices also in Israel, Mumbai and now Shanghai as it breaks into Asian and North American markets. Advantix systems are manufactured on Kibbutz Hahotrim north of Haifa, and the company employs 170 people worldwide.

Advantix is especially relevant for humid climates, but also anywhere where energy savings is an issue.