An easy ‘add-on’ solution from Israel could save some of the $15 billion forfeited each year due to global water loss caused by drips and leaks. 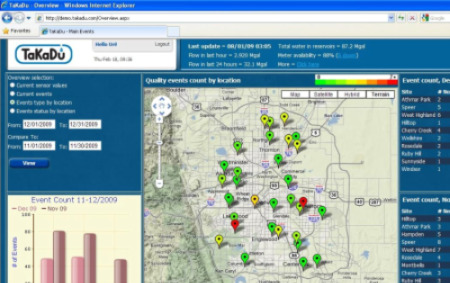 TaKaDu’s add-on software solution can help a city identify and home in on leaks so they can be plugged.

You’d think that a country like the US, that can send ultra sophisticated rockets into space, would have no problem with a low-tech issue like plugging leaks in city waterways. And yet, despite water delivery oversight by municipal departments and mega-companies, the solutions are low-tech as well. As a result, in some cities leaks and dripping pipes can account for 50 percent of all water loss. According to the World Bank, drips and leaks around the world amount to about $15 billion annually.

With enormous amounts of energy needed to purify water, allowing all those drops to drip away is akin to flushing cold hard cash down the toilet. Now a market-ready, easy to add-on software solution developed by an Israeli IT entrepreneur can help a city’s waterworks identify and home in on leaks so they can be plugged.

Ranging in price from $10,000 a month for a small city to $150,000 for cities like LA or New York, company CEO Amir Peleg says the software developed by his Israeli company TaKaDu is radically effective. After all, a hairpin water leak today can become a geyser tomorrow.

Applying high-tech IT to ageing infrastructure

Based on smart math models and algorithms, the TaKaDu software can process both online and historical data, and requires no special technology on the client’s side. TaKaDu takes the data fed to it from a waterworks facility and uses it to detect leaks and help the facility to prioritize repairs.

“We can tell them when, where and how big the leak is,” Peleg tells ISRAEL21c. The TaKaDu system is already hooked up to Australian, European and UK water data and the company has partnerships with IBM and Schneider Electric of France.

The software developed at the 21-person strong company examines parameters such as the flow, pressure, quality and turbidity of water and more. It’s offered as a stand-alone solution that requires no high-tech meter, pump or metrics system to connect with.

Peleg, who sold his latest IT company, YaData, to Microsoft in 2008, explains the transition from the high tech industry to water: “Water infrastructures and networks are similar to, but more complex than IT networks and telecom. Water networks are way more complex: They’ve developed in an evolutionary way in the last 100 to 200 years. It’s aging infrastructure that is leaking. We are bringing a paradigm existing in the telecom industry and in IT to the water world.”

One other Israeli company, Meidan, launched a water software technology to measure and monitor leaks, and showcased it at a clean tech conference in 2008, but to date, TaKaDu looks like the only serious player in this market from Israel.

At the moment Peleg can’t divulge the TaKaDu system’s exact status with respect to trials and operation, but he will say that the company has seen traction and interest from all over the world for trials and evaluation.

A go-to-market strategy based on partnerships

Peleg, who previously founded YaData, Cash-U/Unipier and EVS, tells ISRAEL21c: “It was a pure IT solution that I sold to Microsoft. After that I was free as a bird and I could do whatever I want. There were so many problems in Israel: Problems due to the scarcity of water, and also a movement of VCs into cleantech. Slowly I looked into this space until I found where the problem is – in water management, with the transformation of data into knowledge.”

Since Israel’s Gemini Funds and Giza Ventures have invested $3.5 million in TaKaDu, the company, located in a suburb of Tel Aviv, is not seeking investments. And remarkably, after being in the business for only two years, TaKaDu has already seen sales and is now in the process of forming partnerships.

“We are not selling technologies,” Peleg explains. “We are providing a solution to water networks – software as a service – which is everything over the web, over the cloud. Our go-to-market strategy is via partners. Latin America and Australia are already selling our solution.”

In April, Peleg participated in a California-Israel Chamber of Commerce mission along with nine other Israeli clean tech companies, during which he met possible strategic partners from California’s energy and water sector.

He says that pricing will depend on the size of a network. There’s no one-time fee, just a monthly fee, and cities can see results instantly. “Just hook up to our service over an IT connection and you start to see merits. After four months if you don’t like what you see, then just disconnect,” Peleg proposes, pointing out that “It’s not just about saving water. TaKaDu can also detect faulty meters so that water companies know when their assets aren’t performing well.”

The monitoring network can impact water savings up to 50%, and can help cities predict and prevent water loss now and in the future. “A small leak today? How much is it worth tomorrow?” is Peleg’s concluding rhetorical query.