You’re out of diapers and the baby has just … you know. Or your poodle has eaten all his kibble and is looking at you with those sad puppy-dog eyes. Or you’re short a six-pack of beer for the after-game blowout.

Help is just the click of a button away. Literally.

Israeli startup Kwik makes buttons to place on the changing table, next to the dog dish or on your fridge. Tap the button and it sends a message to your preferred supplier. Refills are on their way within the hour.

Physical buttons that make an electronic call for a re-order are not unique to Kwik. Amazon’s nearly identical Dash buttons have been gaining traction with 150 name brands including Tide, Kraft and Red Bull.

Kwik adds an important tweak: cutting out the middleman.

“Amazon doesn’t share any data on its customers; they keep it all on their platform,” Kwik CEO and cofounder Ofer Klein tells ISRAEL21c. “So brands don’t know who is ordering their products, they don’t know when or where, and they can’t do cross sales.”

Kwik has its own roster of well-known brands – among them Huggies, Domino’s and Budweiser – which can distribute buttons directly to their customers. They’re all in Israel so far as part of Kwik’s beta test. But with a $3 million investment from Norwest Venture Partners last June, the company is getting ready to click through to the US and Europe.

Are buttons really necessary? Why not just open up the Domino’s app on your smartphone to order a pizza?

“Ninety percent of users will not consistently use their app after 30 days, even if they download the specific Purina app for re-ordering dog food,” Klein says. “Their phones are just too stuffed with other apps.”

“If you come home after a party half drunk and you want to turn on the light, you feel for the switch on the wall. You know how to do it. Now imagine your whole home is digital. You have to open your phone and the app, press on ‘kitchen,’ then ‘light on.’ That’s not intuitive. If you can’t do it in less than 30 seconds with no mistakes, it’s not good enough,” Klein says.

The button may have a single function, but you configure it on the Kwik app using your home Wi-Fi network. Otherwise, you couldn’t change between an onion or an olive slice of pizza, or mix up your beer preferences.

Another advantage Kwik hopes its buttons will have over Amazon: companies can choose their delivery service rather than being locked into Amazon Prime.

“That way the same button can connect into one service in London and another one in Los Angeles,” Klein explains. “The brand doesn’t have to write a single line of code. They just continue to make their products. We take care of everything.”

Amazon charges $5 for a button. Kwik allows brands to decide what they want to do with them. (Most are giving them away for free.) Klein envisions some brands putting free buttons in their products’ packages.

Kwik makes money by taking a cut of each transaction. While it can work with any brand, Klein hopes that small- to medium-sized businesses – which frequently get lost among the many options on Amazon – will clamor for a Kwik button.

Kwik began life as WeFind, a company that designed a Wi-Fi wristband to help parents track their kids at, say, an amusement park. But when Klein and cofounder Shlomi Atias saw how Amazon’s Dash was growing, they pivoted to Kwik quickly.

Diapers and pizza are nice, but it’s beer that may have more customers tapping their buttons. Kwik has been testing its product with Anheuser-Busch – Kwik pitched Budweiser’s parent company at the South by Southwest conference earlier this year, where it was one of eight finalists in a startup competition co-sponsored with ZX Ventures. 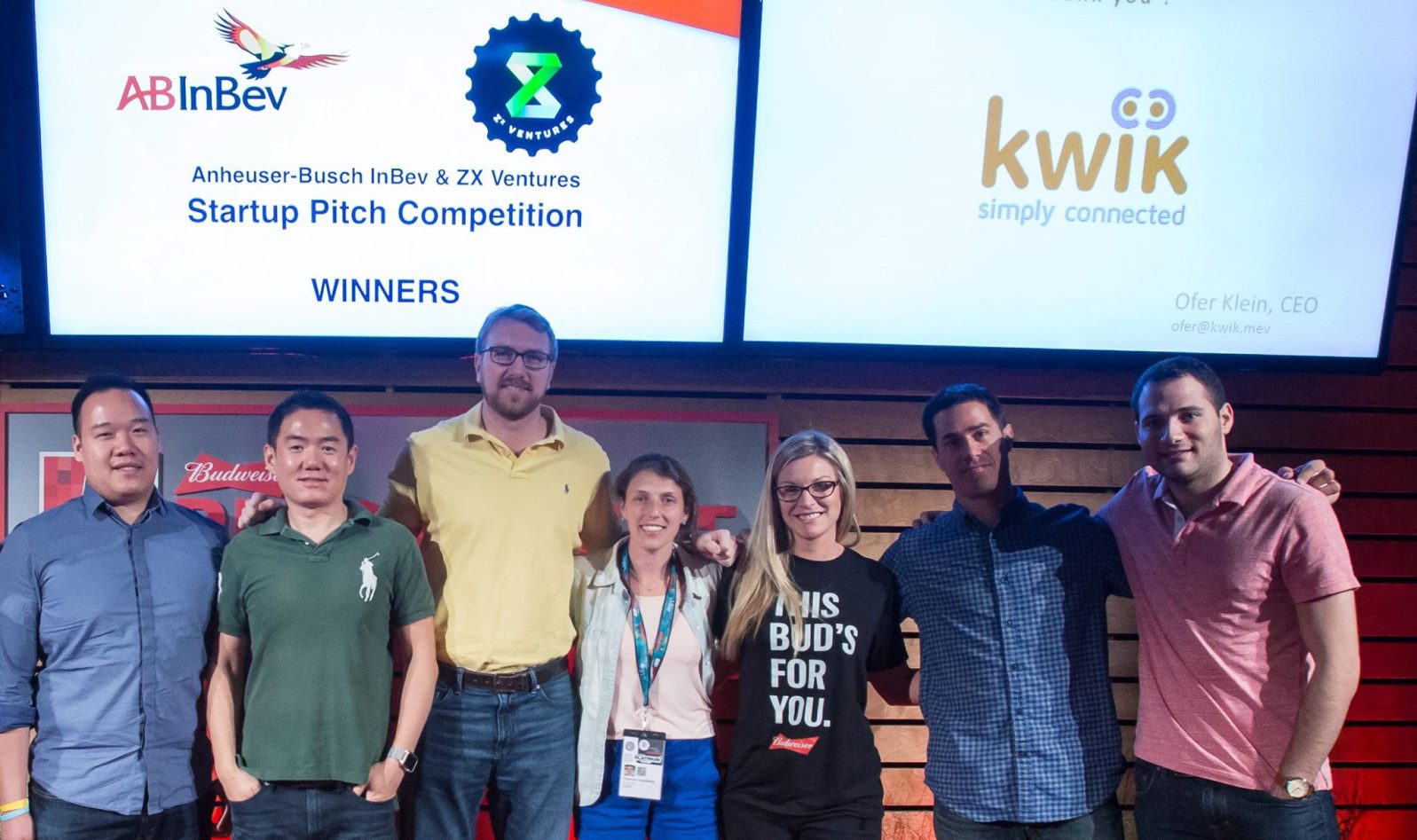 Kwik was a finalist at the 2016 ABInBev startup competition. Photo via Facebook

“It takes three to four seconds to order and it ends with a happy sound,” Klein says, referring to the Kwik button’s confirmation audio. (You also get a text to your phone, which is where you can cancel the order.)

As part of the burgeoning Internet of Things space, Kwik will connect with any vendor’s ecommerce back end and to any device in the home.

In that respect, Kwik is ready for a possibly button-free future, when the re-order functionality for laundry detergent will be built directly into your next-generation washing machine.

Just don’t mix up your suds buttons – clean clothes do not go well with Bud Light.