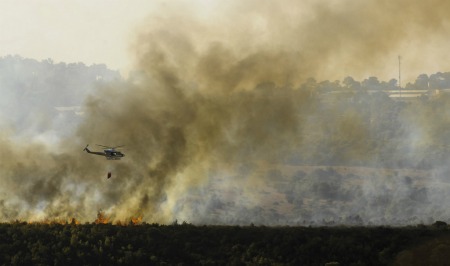 Photos courtesy of the KKL-JNF archive
Battling the December 2010 fire.

Winter flowers are blooming in the Carmel Forest.

This colorful sight is a welcome sign of regeneration in the vast woods of northern Israel, which in early December last year suffered a devastating forest fire.

Israeli firefighters got help from 18 countries to put out the Hannukah blaze, but not before it claimed the lives of 44 people, displaced 17,000 more, damaged thousands of homes and scorched more than one third of the Carmel Forest’s millions of pine, oak, cypress and pistachio trees as well as killing porcupines, jackals, foxes, wild boars, songbirds and snakes.

One year later, there are signs of life in the charred areas. The healing work of Mother Nature is getting a boost from rehabilitation efforts launched as soon as the smoke had cleared in the only Israeli biosphere reserve designated by the United Nations Educational, Scientific and Cultural Organization (UNESCO).

As the inner burned areas regenerate on their own, experts from the Israel Nature and Parks Authority (INPA) and Keren Kayemeth LeYisrael-Jewish National Fund (KKL-JNF) are circling the recovering forest with tree-free “firebreaks” to slow or stop future wildfires.

Preventing the next fire 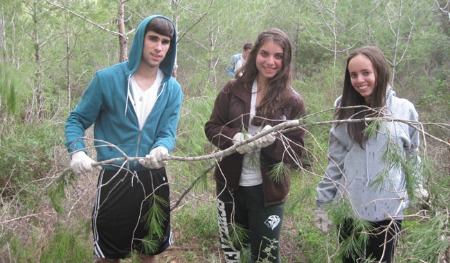 This work on the edges of the forest aims to clear away deadwood fuel that helps fires spread across the forest floor, and to prune trees so that flames cannot jump from one crown to the next. Tree crowns must be at least seven meters apart and lower branches must be thinned to four meters high.

“We are also doing some road-building so we can use the firebreak areas to reach the towns and villages,” Weinberger says.

The safety advantages of every project are explained beforehand at public hearings in the Jewish, Muslim, Christian and Druze communities of the 80-square-mile Carmel region, he says. Repairing and improving the access roads will ensure that emergency vehicles (including seven new KKL-JNF firetrucks bought with contributions from abroad) can more easily reach residential areas, and fewer people would have to flee their homes.

Studying the effects of many fires

It could take years for the forest to fully recover, and experts aren’t sure how it will go — because although this was the worst fire ever, it wasn’t the only one. Some parts of the Carmel Forest have burned five times since the last big forest fire in 1989. Most fires are caused by careless or malicious human activity.

“Fires in the Carmel are frequent and the intensity is high,” says Prof. Ido Izhaki, director of the Carmel Research Center at the University of Haifa. It’s not yet understood how repeated blazes affect the forest in the long run.

“Fires are not so bad ecologically — once in 20 years actually helps biodiversity — but once in six years is different.” Climate change may also affect the healing process, Izhaki tells ISRAEL21c.

Photos courtesy of the KKL-JNF archive
The Carmel is turning green once again.

Haifa University graduate student Naama Tessler is writing her PhD thesis on how fire changes the Carmel’s soil and plant life. She’d finished her survey before the latest fire and so she went back to see how the previously burned plots of land in her study were faring.

“Places re-burned in a short interval cannot recover as well,” she tells ISRAEL21c. “Probably the areas burned only in 1989 [and 2010] will be strong enough to rehabilitate without any problem because there are enough seed banks on the trees. In areas burned in 2006 as well, we will see changes since they did not have enough time to build up seed banks.”

Bright spots in the gloom

But there’s good news as well — for plants and animals.

While exploring the wood after the fire, KKL-JNF foresters discovered ancient agricultural terraces exposed after the dense underbrush burned away.

“We found small, new olive trees here this summer, growing from tree roots that survived, so we decided to plant a grove of fruit trees with carobs, figs and pomegranates, and restore the landscape as it apparently once was,” said forester Micha Silko.

Though many animals and habitats were lost in the blaze, the open spaces it caused help the raptors and gazelles that Hai-Bar Carmel animal sanctuary and breeding center releases into the forest, says manager Ben Rosenberg.

“Raptors like falcons and eagles and some of the buzzards hunt in open areas,” explains Rosenberg, who is also INPA’s Carmel Region ecologist. “Vultures feed on carcasses, which are easier for them to spot in open areas.”

The sanctuary’s animals were unharmed in the blaze, though Hai-Bar is still fixing fencing damaged by the flames. Rosenberg tells ISRAEL21c that it’s hard to assess how well the animals of the forest are doing, “but we believe the jackal and wild boar populations will come back to normal quite quickly.”

The fire caused an estimated $21 million in damages at Yemin Orde Youth Village, which safely evacuated all its residents and staff members before the fire spread. New electrical and plumbing systems, homes and offices, landscaping and a library are already installed, and in the spring work will begin on a new road system.

Dan Ben-Arye of the Ein Hod artists colony in the Carmel tells ISRAEL21c that 17 of the 150 member families were burned out of their houses and still don’t have permanent homes. “But their talent wasn’t burned, so they keep working and producing,” he stresses, and the tourist areas of Ein Hod were back in business two days after the fire.

A more complicated problem is the Druze village of Usfiya, where the blaze began out of apparent carelessness. Izhaki says many Carmel region residents blame the Druze people and mistakenly assume they do not care about their natural surroundings.

Last May, the Carmel Research Center arranged a day long session of lectures and workshops bringing together residents and mayors of the Druze villages with personnel from INPA and the KKL-JNF. The goal is for the villagers to see the forest as an asset to their lives rather than as a source of contention.

“We want to research new ways to help the Druze understand how they can benefit financially from the biosphere by establishing new businesses based on nature but sensitive to the environment,” Izhaki says.

The victims of the fire were memorialized in several ways on the anniversary of the tragedy. The University of Haifa announced at its memorial ceremony that it is awarding scholarships to 44 students in memory of each victim, in return for a commitment to stay in touch with the bereaved families and actively perpetuate the memory of their deceased loved ones.