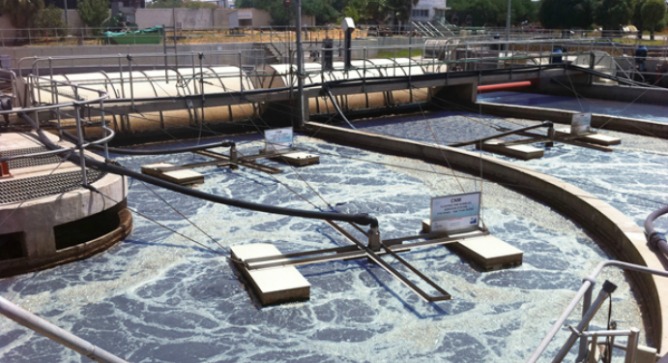 The soles of his shoes might have worn thin from all the road shows and networking events he’s been attending in Britain, but several years of hard work have paid off for Ze’ev Fisher, the CEO of Mapal.

Mapal (“waterfall” in Hebrew) just announced a second round of financing and its first sale in the UK of its unique sewage treatment solution. Mapal’s flagship product, custom-built, aerates bacteria in wastewater treatment plants so that human waste can decompose more quickly and efficiently.

It was an uphill battle getting into the British market, which is privatized yet conservative and resistant to change, Fisher tells ISRAEL21c candidly. He and his team of seven are therefore especially pleased by the sale of an installation to Anglian Water, a UK utilities company serving more than four million people in Stanbridgeford, north of London.

Another UK installation is soon to follow, says Fisher, and he hopes these two deals could lead to a landslide of business in the UK, where about 2,000 aging open-pond sewage systems need upgrading to stay in line with new environmental standards.

The Israeli solution fits what are called “excavated biological reactor ponds” and lagoons where fine-bubble aeration was not a viable solution before. Mapal also upgrades larger reactors.

Mapal’s aeration system, which floats on top of sewage ponds, is an estimated 70 percent more efficient than existing solutions, according to Fisher. Installing it requires no down time for utilities, and results in lower energy costs to operate the plant.

“Most of the world is using open lagoons and open reactors. In the UK [the systems] only have one biological reactor. The operators have two options when they need to repair or build a new system: they drain and shut it and clean it, while only then installing fine-bubble aerators.”

But what to do with the sewage that keeps getting generated when the plant is down?

Mapal’s approach has a “green” spin as well, since it prevents environmental pollution from seeping into rivers, reservoirs and the sea whenever upgrades or maintenance is done.

News of the Anglian Water deal comes on the heels of a fresh UK investment round of about $2 million from Charles Street Securities (CSS) Europe to help Mapal further penetrate the British market. This follows a $2 million round by CSS in 2010, two years after the founding of Mapal.

Funds from the recent investment will go toward further marketing in the UK as well as three other regions outside of Israel, where the company has installed 30 units.

Large factories, such as paper mills, are often required to provide their own wastewater treatment plants in Western countries, and now in China as well. The Mapal solution can provide a lower-cost solution to companies that need to improve the quality of their effluent, claims Fisher.

Mapal also provides industry and municipalities with a mobile unit that can be put into action after a sewage spill or natural disaster that results in dirty standing water in ponds.

With no moving parts, the low-tech Mapal system is paired with high-tech management systems, making it suitable for rural and undeveloped regions and countries, asserts Fisher.

Mapal is based in Nesher, outside of Haifa, and is preparing to open a UK office. The company’s installations can be found in Israeli cities like Ramat Hasharon, Netanya and Yokneam; and near Johannesburg, South Africa; Sao Paolo, Brazil; Peru; Angola; and Congo, says Fisher.

The company is currently negotiating to treat sewage in additional regions of South Africa and South America, as well as in India.

UNCOVER ISRAEL - Get the ISRAEL21c
Weekly Edition free by email
Sign Up Now!
Bring Israel's story to life.
Millions of people around the world rely on us to gain a deeper understanding of Israel. We are the trusted source for original content you won't find anywhere else.
You can make a difference. Donate today to support journalism that brings Israel’s story alive.
SUPPORT ISRAEL21c
Read more on:   Cleantech, Environment, wastewater, Mapal